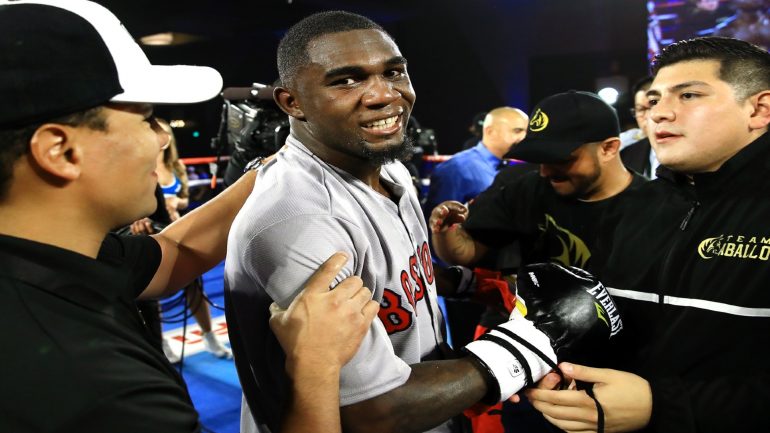 The 12-round bout will take place inside the Chelsea Ballroom at The Cosmopolitan in Las Vegas. The fight will headline the Top Rank undercard and will lead into the junior lightweight doubleheader featuring Carl Frampton against Tyler McCreary and the main event bout between Oscar Valdez and Andres Gutierrez (ESPN+, 10 p.m. ET/ 7 p.m. PT).

The clash between Adames and Teixeira should produce fireworks as they both are heavy-handed and have fan-friendly styles. Adames is the mandatory challenger for the WBO title, which is held by Jaime Munguia, who will be making his middleweight debut against Gary O’Sullivan on Jan. 11 in San Antonio, Texas.

Teixeira is ranked No. 2 by the WBO.

Adames (18-0, 14 knockouts), who is originally from the Dominican Republic and now resides in the New York City area, last fought on June 28, defeating the late Patrick Day by unanimous decision. The victory snapped a string of three consecutive victories.

The 25-year-old Adames is confident he can upend Teixeira and become a world titleholder in 2020.

“A victory on Nov. 30 will mean one of the last steps en route to fulfilling my dream of becoming a world champion,” said Adames, who is trained by Robert Garcia. “Without a doubt, this fight is the most important of my career. There is no room for mistakes. A victory guarantees me the opportunity to challenge for the world title. That’s why I worked hard (in the gym). I assure you that the Dominican Republic will have a world champion very soon.”

Adames made his Top Rank debut with a victory over Mexico’s Alejandro Barrera on May 12 of last year.

Teixeira (30-1, 22 KOs) defeated Mexico’s Mario Lozano by unanimous decision in his last bout on Apr. 13. He has won his last four bouts since suffering his only loss at the hands of Curtis Stevens in May of 2016.

The 28-year-old from Sao Paolo, Brazil now resides in the boxing hotbed of Oxnard, California, where he believes he has improved and has more confidence in his skill-set.

“I’m very excited to fight Carlos Adames in Las Vegas in this elimination fight for the world title,” said Teixeira, who is managed by Patrick Nascimento. “I’m very happy for this opportunity. It’s an important fight for me because I will be able to pursue my dream of becoming a world champion.”

Also in preliminary action on the Top Rank card:

– Welterweight prospect Brian Mendoza (18-0, 13 KOs) of Las Vegas, who has stopped six of his last seven opponents, will square off against Utah’s Larry Gomez (9-1, 8 KOs) in an eight-round bout.

– Undefeated Andy Hiroaka (14-0, 9 KOs) of Tokyo will make his United States debut against Rogelio Casarez (13-8, 5 KOs) in an eight-round bout. Casarez, who resides in Batesville, Arkansas, has lost his last three fights.

– Heavyweight Jared Anderson (1-0, 1 KO), who also made his pro debut last month and was Team USA’s top-ranked amateur when he signed with Top Rank in September, will square off against Stephen Kirnon (2-2-1, 1 KO) in a four-round bout.