KSI, still buzzing from Logan Paul victory, says he will continue boxing… fellow celebs, that is 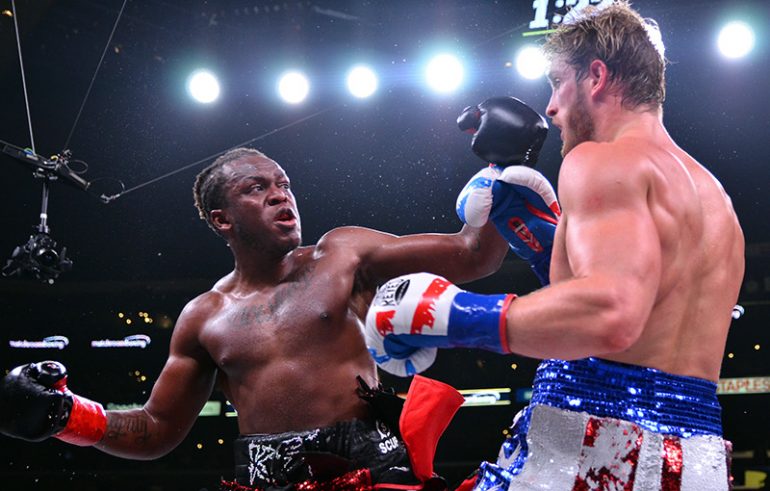 KSI and Logan Paul tried their best to look like pro boxers, not that their fans cared. The YouTube stars put on a show. Photo by German Villasenor
20
Nov
by Michael Woods

KSI was sore, for about three days…and then, it was back to the grind, which was made more palatable because his new song was performing more than respectably on the charts.

KS1 got the ‘W’ November 9th, a split decision, over Logan Paul in their battle of the YouTube titans, and is now back in London, doing road work.

The 26 year old chatted with The Ring, and darn right, we wanted to know: Is he going to go for that thrillogy, a third fight with rival for the ages Paul?

“There doesn’t need to be a third fight,” said Olajide Olayinka Williams “JJ” Olatunji, known by tens of millions of followers as KSI, the rapper/fighter. “I’m the winner, I’m the champion, Logan Paul had two chances, he failed twice.”

On fight night, judges saw it 57-54, 56-55 for KSI, and one arbiter had it 56-55, for the surfer-boy styled video magnet Paul. And a b-load of people who have never and never would watch pugilism watched a scruffy but fiery sampling of the sweet science.

They had traded leather, with head-gear on, in 2018, and the numbers they did turned heads. Something like 22 million views were achieved on PPV, free view and illegal streams. The executives at DAZN, and promoter Eddie Hearn, got to thinking. What if they did a rematch, but as professionals, sans headgear? Predictably, purists scoffed, and kept scoffing, while not being able to resist temptation to tune in, when the pro debuters headlined at Staples Center, relegating Devin Haney to a support role.

And the passion the dilettante hitters showed, from the get go, had purists admitting that maybe this wasn’t so bad. Yes, form was at times ragged…but it was clear that they both wanted to win, and this was no spirit-less cash grab, a coming together of business-men collaborating to present a sports entertainment interlude…this was a FIGHT. 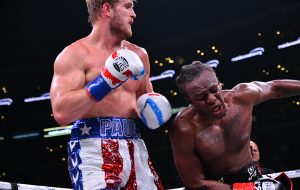 Paul rocks KSI in Round 4. Photo by German Villasenor

And, a promoter’s wet dream, there was controversy during the clash. KSI sent Paul to the mat, in round three, but wasn’t credited with a knockdown. Reiss thought he pulled Paul down. In round four, Paul landed a filthy uppercut, but followed up by holding KSI, behind his head, on his neck, and firing up follows. The ref, Jack Reiss, put his foot down. Two, actually…He deducted two points from Paul, and that impacted the decision. Paul, in fact, said in the ring that night he’d be lodging a protest, with the California commission, and word is he is proceeding with that action.

KSI told The Ring that he supports Reiss’ decision, and noted that being hit behind the head was severely unpleasant. After he had his hand raised, the digital duo gave watchers who attended and tuned in on DAZN more bang from the entertainment buck. Interviewer Radio Rahim asked KSI if he forgave Paul for talking all that smack, and wondered if they were now bonded, in mutual respect. KSI offered a pause that showed his timing in acting is a notch better even than with his power-right hands. Yes, he said, we are good. “It got very heated between us,” KSI told The Ring.

And, did he think about telling Paul to go eff himself, in that moment. He laughed. “Not all is forgiven. I wanted to go the other route. But (strength coach) Larry Wade was shouting, ‘Respect, respect.” And you have to give respect to anyone that enters that ring.” 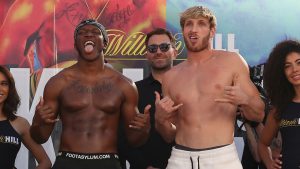 The combatants didn’t show respect during their lead-up. The trash talk was profane, to be sure. And, does KSI regret anything he said in the days leading to the collision…or is he still stung by anything Paul yapped at him?

“It was over the line me saying I’m gonna kill you, that was definitely over the the line, I definitely regret saying that, especially after what happened to Patrick Day,” KSI said. “It was very heated between us. I don’t regret pushing him, telling him I’m gonna him beat him.”

So, his new-found fans want to know, is he going to fight on…or hang up the mitts, just concentrate on the music? New single “Down Like That,” featuring Rick Ross, L’il Baby and S-X, is approaching 30 million streams. My daughters put it on while I conducted the interview, and my 9 year old said, “I know this song!”

“I’m gonna fight again, but I don’t think I need to fight Logan again,” he said.

And yet…KSI wasn’t angry, but he was passionate as he related how pissed he was getting hit behind the head. The Englishman has watched the six round scrap like three times, and he says he liked lots of what he did. Hitting to the body, activated some solid defensive maneuvers, he is pretty happy with what he showed with about two years of training. He realizes he was too wild at times, but that came from being frustrated, because Paul was too defensive.

OK, so, moving forward, does he keep training, and look to get a fight against a more seasoned pro?

“I think it would make more sense to fight celebs, that would draw more attention, me fighting a journeyman wouldn’t bring numbers. I’m a business-man, I do things that make sense,” KSI shared.

In the near future, he will be making more music, looking to prove, again, to doubters that he can sustain in that sphere, as he did in the ring, though many dismissed him as the underdog, believing Paul’s heft would gain the Ohio attraction the triumph.

And, KSI is looking forward to his buddy Anthony Joshua’s Dec. 7 bout, in Saudi Arabia, against Andy Ruiz. KSI says yes, AJ got rocked and stopped in NYC June 1, but champs get felled now and again. “People get kayoed. Mike Tyson did, and he came back. I know AJ is very serious this time!”

I almost went over that line, into the promoter place, when I asked KSI, is he sure, that Staples Center beef was a critical success, mostly, and he made good bank, and there was controversy: that’s a recipe for a third scrap, no? 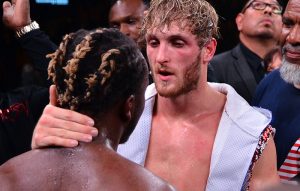 No, he said, chuckling. Been there and done that to Paul, that was his message. But, he said, he will be talking to the crew at DAZN, probably, about what might come next, in the not too distant future. First, there are probably another 5 (or 10?) million streams to add to the tally. This KSI should be respected; he’s playing it savvy as hell right now, if there is even a hint of a thought of a third fight, because people tend to pursue those who are hard to get. People like me will keep asking, When is the third fight, and in a few months, if he gets a itch he wants to scratch, bang, we see KSI-Logan Paul 3. How does summer 2020 sound, at Wembley?