Peter Manfredo Jr., a laborer by day, returns to his labor of love in the ring 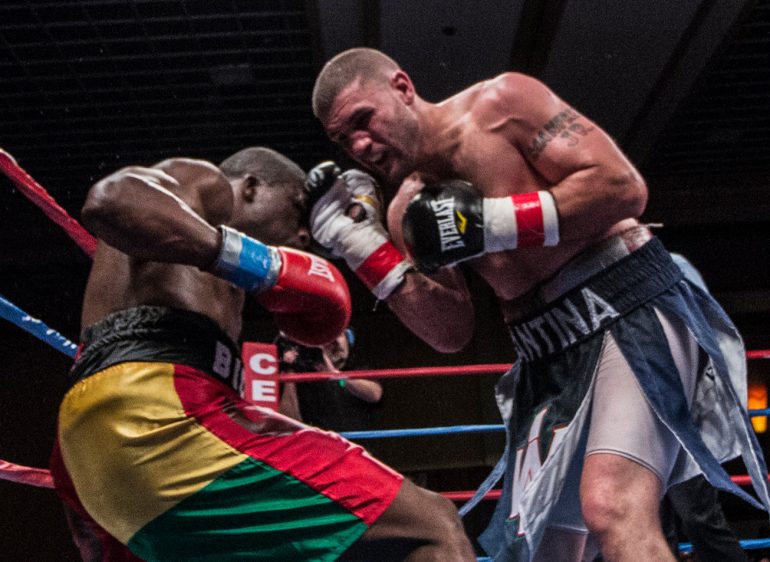 Peter Manfredo, in his most recent fight, against Vladine Biosse in 2016. Photo from Jake Aiken
19
Nov
by Ryan Songalia

Peter Manfredo Jr. hasn’t competed in a professional prize fight since 2016, but he’s been busy nonetheless. Every work day, he wakes up at 3:30 a.m. to drive from his home in Rhode Island to Boston, to begin work at 6 a.m. He’ll work until 2:30 p.m., and then drive back, arriving back home at 5 or 6 in the evening, depending on traffic.

Since 2008, he has worked as a laborer, first at the Dunkin Donuts Center, his hometown arena, sweeping floors and doing “change-overs” for events at the building where he fought five times. Now he works for the Lee Kennedy construction company, doing whatever the job calls for: mixing concrete, carrying bricks up three flights of stairs, cleaning up the job site after the carpenters do their tasks. It’s taxing work, but it’s nothing compared to life as a fighter.

“Boxing for me is harder because you’re physically and emotionally drained all the time. You’re always training, it’s a hard sport, you’re fighting for money, you’re getting hit in the head for money,” said Manfredo, now 38.

Manual work is easier, but it’s not his passion Manfredo says. “I’m just a laborer, that’s not my trade. Boxing is my trade, that’s all I know,” said Manfredo.

Manfredo (40-7-1, 21 knockouts) has taken the week off from work ahead of his ring return this Saturday against Melvin Russell (11-7-2, 7 KOs) in a ten-round bout at the Twin River Event Center in Lincoln, Rhode Island. Manfredo says he feels good, like he still has something to offer in the ring, but concedes that he won’t truly know until he steps in the ring with “The Romantic Cowboy” of Kentucky, a 40-year-old journeyman whom Manfredo says he’s only seen about 20 seconds of on YouTube.

He was a “fat, happy retired family man” at 200 pounds, he says, and agreed on a 175-pound weight limit because he figured he could still be comfortable there after dropping around 20 to 30 pounds. Still, he says he’ll never compete there again because the fighters would be too big.

Prior to the 2016 bout, a split-decision against Vladine Biosse, Manfredo hadn’t fought in over two years. Following his fifth round stoppage against Julio Cesar Chavez Jr. in 2011, Manfredo won three straight, but says he’d been ready to hang up his gloves for good by the age of 30.

“I never wanted to take punches for the rest of my life, but things happen. I got three kids, I got a wife. If I want to go on vacation one day, I can’t afford to do it unless I take a fight,” said Manfredo.

What about the danger of getting back in the ring, at what is considered by boxing standards to be an advanced age, and the possibility of being seriously hurt?

“I’m still OK now, I’ve got a couple brain cells left so I might as well use them.” 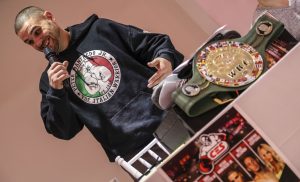 Through the platform of reality TV, Manfredo went from undefeated prospect to television star in 2004 when he joined the cast of The Contender. He was eliminated from the show in his first fight after losing a decision to Alfonso Gomez, but got a second chance after the late Jeff Fraza withdrew from the show with chicken pox, and Manfredo was voted back onto the show.

He made the most of his mulligan, defeating his next three opponents, including a rematch against Gomez, before facing Sergio Mora in the final. Manfredo lost, once in convincing fashion, and much less so in a rematch, but the likable every-man became a popular attraction from his exposure on NBC.

A pair of third round knockout wins in ESPN showcases earned him a title fight against WBO super middleweight titleholder Joe Calzaghe in 2007, but this time he was on the receiving end of a third round stoppage.

Manfredo may have been the “Pride of Providence”, but he freely admits he wasn’t the most talented fighter to come out of his New England state.

“I’m very humble, I’m a very good fighter but I’m not a great fighter. I was never an elite fighter,” said Manfredo. “The kid we have, Demetrius Andrade, on Rhode Island, he’s probably the best fighter talent-wise that ever come out of this state.

“I didn’t have his talent but I had toughness and I was willing and I didn’t care who I fought, I wanted to fight the best.”

He says the venue – a smaller arena that seats around 2,000 – is nearly sold out for fight night. In his corner will be Steve Maze, not his father Peter Sr. The two haven’t trained together in years, though they remain on good terms otherwise. “We can’t work together,” said Manfredo Jr. “We fight all the time. He’s my father, at the end of the day I just want a father-son relationship.”

Manfredo Jr. has no end game laid out – who knows how he’ll look three days before his 39th birthday – but he’s keeping an open mind. Perhaps he can coax Mora – a DAZN commentator now who hasn’t fought in 19 months – back into the ring for a third fight, he wonders.

“I want to see how I do on this fight, if I do well on this fight we’ll talk about the next one,” said Manfredo. “I don’t know if I’ll be hit by a truck tonight and die. You don’t know what tomorrow has to offer.”

Manfredo may not believe he’s the most talented, but there are few fighters more honest.