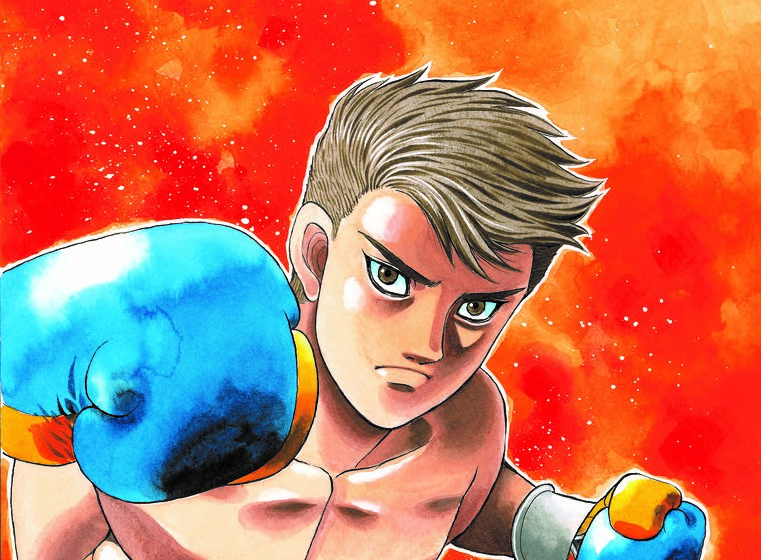 “The Monster” either went life and death with a 36-year-old veteran who had lost two of his previous five bouts, in which case the Japanese star merely held onto his pound-for-pound placement, OR Inoue turned back the spirited challenge of a future first-ballot hall of famer in the epic final of the World Boxing Super Series bantamweight tournament, which unified two major 118-pound world titles and merits his advancement in the mythical rankings. 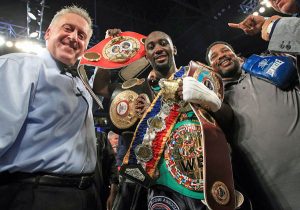 The Ring Ratings Panel was split, for days (which is why it’s taken a while for the rankings to be updated and for this Ratings Update to drop), leaving Yours Truly to be the tiebreaker. I voted for an advancement of one spot, allowing the No. 4 rated Inoue to supplant No. 3-rated Terence Crawford. That may not sit well with some, which is understandable. Crawford’s a three-division titleholder, former undisputed 140-pound champ and one of the most dominant elite boxers in the sport. However, due to the divisive nature of the boxing business, Crawford’s career momentum has stagnated with his move to the welterweight division, where he’s fought beltholder Jeff Horn (who was The Ring’s No. 5-rated 147 pounder at the time), Jose Benavidez Jr. and Amir Khan (both of whom were unrated). He’s scheduled to face No. 8-rated Egidijus Kavaliauskas next month.

Inoue (19-0, 16 KOs), the reigning Ring bantamweight champ, is also a three-division titleholder who is on his way to unifying the major 118-pound belts. Since moving to bantamweight, Inoue has defeated the division’s No. 2- (Jamie McDonnell), No. 4- (Juan Carlos Payano) and No. 3-rated contenders (Emmanuel Rodriguez and Donaire), crushing all but the decorated four-division titleholder. The career momentum, in my humble opinion, is with Inoue.

Here’s what the Panel had to say on the subject: 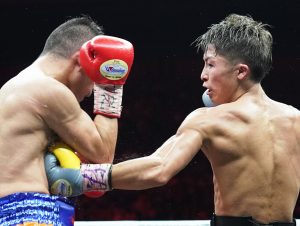 “Naoya Inoue stays at No. 4,” suggested panelist Anson Wainwright. “Excellent effort from both him and Donaire. Think he’ll learn from this fight. He had to fight through some adversity for the first time. High standards at the upper echelons of the pound-for-pound tree. It’s a hair between the top four.”

Associate Editor Tom Gray, who covered the showdown in Saitama, Japan for The Ring, suggested the move to No. 3.

“I’m not against Inoue remaining at No. 4, but Crawford’s lack of solid competition is starting to hurt him here,” said Gray. “As we all know, his being a Top Rank/ ESPN welterweight is what’s freezing him out, but that’s not our problem. I could see Inoue leaping over him to No. 3.”

Panelist Adam Abramowitz could see a much bigger leap.

“I will continue to vote for Inoue as No. 1 pound-for-pound,” he said.

“Naoya Inoue is my No. 1,” he said, “any lingering questions about how he would react when not in 100% control were answered. He battled through injuries and a tough challenger winning championship rounds in a fight of the year contender. When I see Inoue in action, I sense he is best. I don’t get that with Canelo who I also still view as PED tainted. Not much between Nos. 1 to 6 in the pound for pound. As I said, it is more of a sense than proof but that is what P4P is about I guess.”

Panelist Diego Morilla didn’t give a specific opinion on Inoue’s movement, but was against The Monster supplanting Alvarez in the No. 1 spot.

“Alvarez defeated a guy only SEVEN years older, a former P4P entrant, jumping TWO divisions and being a 5 to 1 favorite to win,” stated Morilla. “He stopped his man and walked away without a mark on his face. 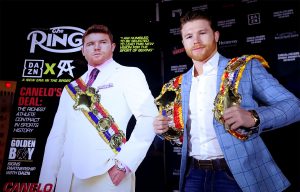 “Inoue defeated a guy TEN years older, a former P4P darling as well, in what appears to be his NATURAL division and being a 10 to 1 fave, only to win by decision after being cut, rocked and tested in ways no one imagined.

“I did say it last week: ‘If Inoue beats Nonito in 5 or less, the P4P roads will lead to straight to him.’ He did not achieve the type of career-defining highlight-reel win that we expected given the circumstances. Canelo is fine at No. 1, everyone else is at 1.1, 1.2 and 1.3 for all I care, but in terms of achievements, longevity, proven record and eye test, His Freckled Majesty still deserves the throne.”

Additional panel debate, carried on throughout the week, revealed that Mulcahey was adamant about Inoue going to No. 1, while Tris Dixon and Coyote Duran added votes for No. 3, as did Abramowitz in hopes of guaranteeing an advance for the burgeoning superstar.

Pound for pound – Naoya Inoue advances to No. 3.

Heavyweight – Kubrat Pulev remains at No. 10 after an uninspiring decision over unrated Rydell Booker.

“Saunders retained his WBO title with the (KO),” Wainwright said. “Move him up to No. 6. It’s a big move off this win but he does hold a win over (Chris) Eubank (Jr.) so he should likely be above him and Eubank is dropping to middleweight next month.”

Mulcahey wasn’t sure of Saunders making that big of a jump. 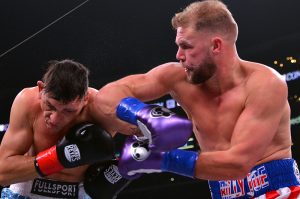 “He’s bit like Pulev,” he said. “I know Billy Joe Saunders has more to show but he’s not motivated to show more against an average foe who did not push him. I understand logic of needing to move him over Eubank, but that win did come at 160 pounds. Eubank has two very good wins at 168, while Saunders has not really beaten anyone at the weight. I can see him moving up one spot, above (Caleb) Truax, but no more.”

“Having followed his career closely, I can certify that Coceres was a legit contender (he did build up his record at 160, but that gives him even more credit when you see how well he did at 168, even leading on one scorecard at the stoppage), so yes to Saunders at No. 6,” said Morilla.

Middleweight – David Lemieux drops out due to inactivity and announcement of moving to the super middleweight division. Esquiva Falcao (25-0) enters the rankings at No. 10.

Mulcahey thought Haney looked good enough to merit advancing to the No. 1 spot.

“Devin Haney is the future and more and more looks like the now at 135 pounds,” he said. “My vote is to move him above (Richard) Commey (who I like and enjoy watching more) to No. 1 on strength of overall skill-set and dominance. 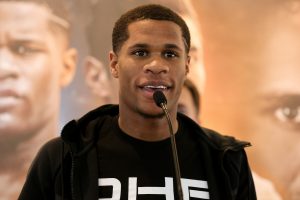 “Yes, Haney has not beaten level of opposition Commey has, but he has also not faltered (I thought Commey beat Robert Easter but did lose to Denis Shafikov) yet. If Commey beats back challenge of Teofimo Lopez he moves back up, but for now I favor youth and potential of Haney over known flaws of Commey.”

Wainwright, Abramowitz, Morilla (and Yours Truly) were against moving the 20-year-old to the top spot.

“As much as I love Haney, I can definitely wait to see him move up,” stated Morilla. “Santiago presented barely one or two challenging issues (reach, bit of power) and Haney had to work hard to finally break through. Young guy with tons of potential. He’ll get there one day.”

Junior lightweight – Jamel Herring remains at No. 5 after turning back the challenge of unrated Lamont Roach Jr.

“Real good win for Jamel Herring over Lamont Roach to retain his WBO title,” said Mulcahey, “though not enough to displace (Andrew) Cancio just yet given his hot streak and wins over (Alberto) Machado who I rated higher than most. Herring to stay at No. 5 for me as well.”

Bantamweight – Inoue defends Ring championship. Donaire remains at No. 3. Nordine Oubaali remains at No. 4 after outpointing Takuma Inoue, who drops to No. 10.

“What a fight! Both deserve their plaudits,” stated Wainwright. “Inoue reaffirms his status as the best 118 pounder in the world, adding the WBA belt to his IBF strap. Personally, I’d still like to see him face (Luis) Nery to erase any possible doubt. 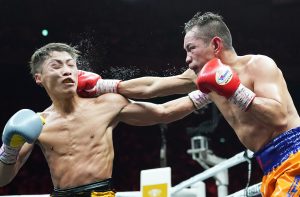 Donaire was dangerous veteran throughout. Photo by Naoki Fukuda

“Donaire showed why he is a future hall of famer with a brilliant performance. No losers, fans were the real winners from this Fight of the Year candidate. I’d like Donaire to stay where he is but could also see a drop of one place because Nordine Oubaali widely outpointed Takuma Inoue to retain his WBC title. Takuma to drop to No. 10.”

Gray was all for Donaire holding his ranking.

“Donaire stays put, it would be an insult to move him down after that. In a losing effort, he proved that he is STILL GREAT and tested one of the best fighters in the world to his very limits.”