Shields-Habazin Rescheduled for January 10 in AC on Showtime 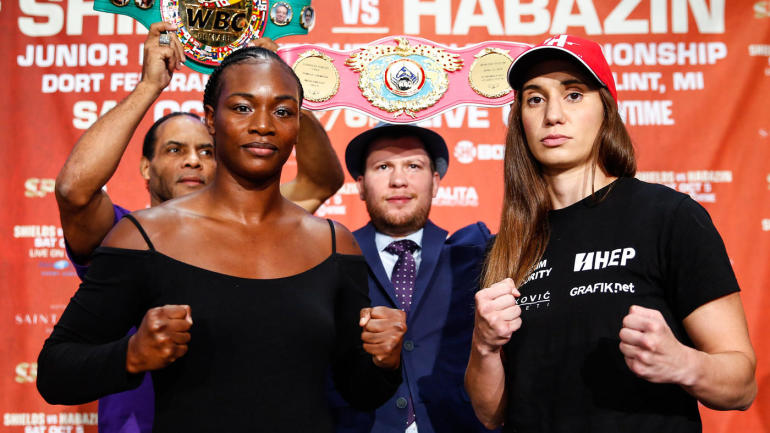 NEW YORK – Showtime announced on Friday that the long-awaited showdown between undisputed middleweight world champion Claressa Shields and former champion Ivana Habazin has been rescheduled for Friday, January 10 live on Showtime from Ocean Casino Resort in Atlantic City, N.J. Shields and Habazin will face off for the vacant WBC and WBO 154-pound world titles as Shields attempts to make history as the fastest fighter in boxing, male or female, to become a three-division world champion.

Shields and Habazin were scheduled to fight on October 5 in Flint, Mich. The bout was called off less than 36 hours from the opening bell following an altercation at the official weigh-in that resulted in an injury to Habazin’s trainer, James Ali Bashir. This is the third date for Shields and Habazin. They were first scheduled to meet on August 17 before Shields withdrew due to a minor knee injury.

The 24-year-old Shields (9-0, 2 knockouts) became the undisputed middleweight champion with a near-shutout victory over previously undefeated world champion Christina Hammer in April on Showtime. In doing so, the two-division titlist joined Terrence Crawford, Jermain Taylor, Bernard Hopkins, Oleksandr Usyk and Cecilia Braekhus as the only fighters to have unified all four major world titles in any weight class (Katie Taylor has since joined the prestigious list). On January 10, Shields will seek to make even more history in her sixth headlining appearance on Showtime. With a win over Habazin, Shields would become a three-division champion in just 10 bouts, breaking the record of Vasiliy Lomachenko and Kosei Tanaka, who both accomplished the feat in 12 fights.

“My goal is to become three-division champ faster than any man or woman in history,” Shields said.  “This is a very significant fight for both of us. We have both trained really hard twice and great opportunities await the winner, so hopefully three times is the charm.”

Habazin (20-3, 7 KOs), of Zagreb, Croatia, is ranked No. 1 by the WBO at 154 pounds. The 30-year-old, who will be making her U.S. debut, won the IBF Welterweight Title over Sabrina Giuliani in 2014. In her next fight, Habazin dropped a unanimous decision to Braekhus in a historic unification bout where Braekhus picked up all four major world title belts. Most recently, Habazin avenged one of only three losses in her career to Eva Bajic in Zagreb.

Habazin will train in her native Croatia and has dedicated the fight to Bashir.

“I’ve been thinking about this since October and I have more of an incentive now given what happened,” Habazin said. “I feel like I’m fighting for James Ali Bashir, as well as for my own pride and respect. I’m also fighting for my country. I want to make Croatia proud that I am their daughter, and I feel that I now have their full support. Claressa is just a brief stop on my journey. I have bigger dreams and bigger shoes to fill in my life. I’m on my way to fulfilling my personal legend – being crowned the undisputed women’s junior middleweight champion. This is just another step on that journey. Given my faith, I feel that while what happened in October was incredibly unfortunate, this was God’s plan.  And I have faith that my hand will be raised in victory in January.”

“January 10 is going to be an important date in boxing history as Claressa continues her unprecedented journey toward greatness,” said Dmitriy Salita, President of Salita Promotions. “A win over Ivana Habazin would make Claressa – in just her tenth fight – the fastest boxer ever to acquire world title belts in three weight categories. But a very determined, skilled and experienced boxer stands in her way, and Ivana is pursuing her own world championship dream. History will be claimed in the ring on January 10 at the Ocean Casino Resort in Atlantic City and live on Showtime.”

“With five world titles in just nine professional fights, Claressa Shields has been making women’s boxing history at a record pace,” said manager Mark Taffet.  “Now, in her 10th fight on January 10, she seeks to win a world title in a third weight division faster than any man or woman in history, and in remarkable fashion by going down in weight each time. Claressa continues to render the impossible possible. It’s truly Herstory.”

Hard-hitting super lightweight Shohjahon Ergashev (17-0, 15 KOs), of Uzbekistan, is ranked in the top-15 in three of the four major sanctioning bodies.  The 27-year-old Ergashev is coming off an impressive fourth round knockout of veteran Abdiel Ramirez this past August on ShoBox: The New Generation.  In his previous appearances on the prospect developmental series, the former member of the Uzbek national team scored a third round knockout against then top-10 rated Sonny Fredrickson, and a 10-round unanimous decision over previously unbeaten Mykal Fox.  The hard-hitting southpaw currently trains in Detroit with Javan “Sugar” Hill at the new Kronk Gym with stablemate Vladimir Shishkin.

“My goal is to be the junior welterweight champion of the world in 2020,” Ergashev said. “After I win this fight I will be just one step away from realizing my dream of bringing the world title home to my country Uzbekistan.”

The 27-year-old Hunter is ranked No. 12 in the WBA.  A native of Las Vegas, the 6-foot Hunter will make his national television debut against the first undefeated opponent of his career.  Hunter, who is the younger brother of former Olympian Michael Hunter, trains at Bones Adams Gym in Las Vegas and is co-managed by former heavyweight champion Hasim Rahman.

“I’m looking forward to making my national television debut on Showtime,” said Keith “The Bounty” Hunter. “Boxing is in my blood and January 10 will be my chance to take my career to the next level. Ergashev has a bounty on his head, I’m here to collect!”