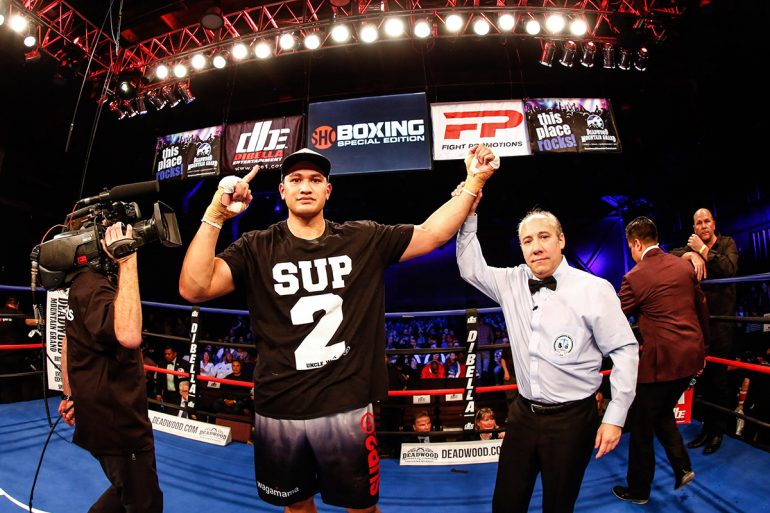 New Zealand’s Junior Fa was just about to leave for the United States in September when his father, who had recently been diagnosed with cancer, passed away, leaving the 30-year-old heavyweight contender planning a funeral instead of continuing his training camp for his third appearance of 2019 as he continues to climb his division’s rankings.

“We were surrounded by family which is what helped me,” Fa recalls. “In his diagnosis, the doctors gave him six months to live and he passed away in five weeks. It’s a reminder that our time is short here, so I want to make the most of my talent while I am still here on this Earth.”

Fa (18-0, 10 knockouts) said he allowed himself to mourn for a few days before getting himself together to move forward with his fight against former Olympian Devin Vargas, scheduled for this Friday night, at the Salt Palace Convention Center in Salt Lake City, Utah. The bout will be streamed live on UFC Fight Pass.

“My father wanted me to continue chasing my dreams, so that’s what I am going to do and I will continue to help and support my family,” Fa said. “I am so thankful to be fighting in Utah because it has become a second home for me so I am looking forward to seeing all those red flags in the crowd and my friends will get to see me put on a great show.”

Fa’s father Uaine, after whom Fa is named, was born in Tonga before moving to New Zealand. According to the Salt Lake Tribune, one out of every four Tongans in the United States calls Utah home, so a large crowd is expected to come out to support Fa, as he gets closer to a heavyweight title opportunity. The 6-foot-5 Fa is coming off a unanimous decision victory over Dominick Guinn last June, in California, in a bout in which Fa was knocked down in the fourth round from a left hook.

“That was important for me to go though that,” Fa admits. “I learned a lot from that experience. A lot of fighters get knocked down and jump back on their feet. I took a knee; I took my time. I wanted to make sure my head was clear. That is very important.”

Fa is not expecting a soft touch, as Vargas (21-5, 9 KOs) is coming off a surprise stoppage victory over previously unbeaten Niall Kennedy, in Massachusetts, last August.

“Vargas could be my toughest opponent yet,” said Fa. “He is not one-dimensional like some of my recent opponents. Vargas is motivated coming off a big win. He can mix it up; he can stay on the outside and box. I will have to be at my best to win.”

Vargas has been stopped in all five of his losses but Fa does not believe he must add another knockout loss to Vargas’ resume to make a statement. It is one of many tips Fa picked up from training with WBC titlist Deontay Wilder.

“I don’t need to knock him out but I believe I will do it because he will bring it out of me,” Fa explains. “I’ve been in two camps with Deontay Wilder and he taught me a lot, just the way he carries himself during and after training. He is so focused in the ring and carries himself like a champion inside and out of the ring.”

Fa holds two amateur victories over former WBO beltholder and fellow New Zealander Joseph Parker and believes if they fight professionally, it can be huge back home. However it’s not on his to-do list at the moment.

“He is not a target for me right now,” Fa explains. “Don’t get me wrong; it would make for a huge fight in New Zealand but he doesn’t have a belt right now and I am all about becoming a world champion. When he was the champion, I wanted that fight very badly.”