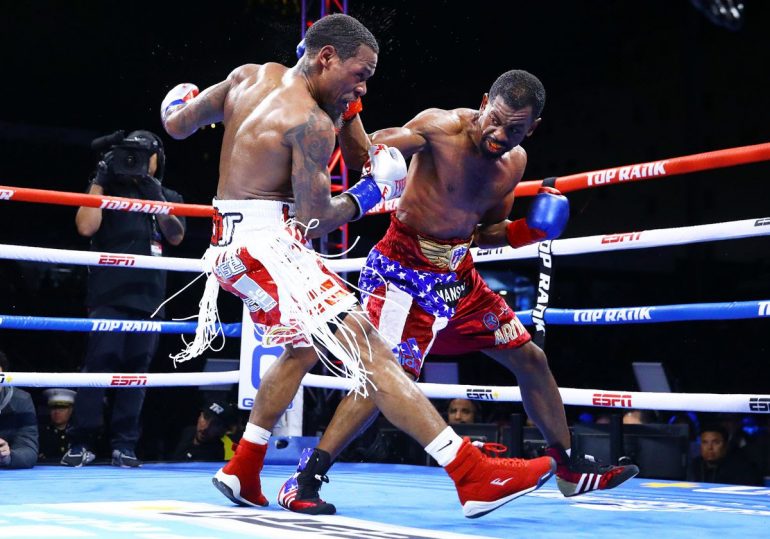 This recently released chapter is in keeping with the rest of the pages written to this point. Jamel Herring got ‘er done, he defended his WBO 130-pound crown on Saturday night on a Top Rank card in Fresno, Calif., which screened on ESPN+. But yes, he had to walk through some fire to get to the other side.

The Fighting Marine, whose battle with PTSD was laid out expertly by ESPN’s Mark Kriegel in a promo video which ran twice on the ESPN presentation, who additionally lost a daughter to SIDS, got buzzed bad in round 11 against Lamont Roach, and had to struggle through the moment.

He got through it, though his legs tried to betray him after Roach threw a Hail Mary right hand that caught Herring backing up, on the ear/neck. He got through it because that’s what the hell he does. In Iraq…at home…in the ring.

Now, the YouTubers took a lot of oxygen from the room Saturday night. Eyeballs were more so focused on the goings on at Staples Center, in that KSI versus Logan Paul bout, rather than the title defense for the fighting pride of Coram on Long Island, N.Y.

What’s Herring’s take on that?

“That was ridiculous.  It’s good for publicity but I would be upset if I was one of the fighters, fighting on the undercard. I’ll catch it today though,” he told me.

Back to his effort…What grade does he give himself for the unanimous decision win?

Nothing but love and respect for this man. I know he’ll bounce back in a major way!

“I give myself a B,” said the 34 year old who now owns a 21-2 (10 knockouts) record.  “A lot of people thought it was a good fight, but I’m a harsh critic on myself. I just feel if I want to face the other champions and be competitive, I have to tune some things up in the arsenal. Lamont (19-1-1 7 KOs) was very defensive and trying to counter a lot, so at times it became too much of a chess match for my liking but I pulled it out in the end. I became too defensive at times because I was wary about getting hit behind the head but as we got into the later rounds, I had to step on the gas more.”

Herring is ultra easy to like, and admire. His humility and vulnerability makes him a role model for anyone, of any age.

“I respect everyone’s opinion,” he said, when we discussed some things that he could maybe do better, moving forward. “I will go back to the drawing board and continue to work!”

He can be proud of this title defense. Getting through that 11th alone…

“Honestly, I had Patrick Day on my mind a lot lately. I don’t want to see my opponent permanently damaged, and I want to go home to my family in one piece. Like you said though, I’m ok, he’s ok, and I’m just happy to be here today. Mike, I had to really dig deep and find some soul searching,” Herring said. “I was buzzed majorly! If I’m being truthful, that minute in the corner got me back together! I knew he would come out hard in the 12th, but my legs and boxing ability got me through it.”

And what exactly goes on in a brain after getting buzzed in such a manner?

“Definitely a lot of confusion! Then you’re focusing on avoiding another big shot, that may end it all, so my instincts had to kick in! I had to quickly gather myself in that corner, but it’s a wild experience!”

We ended on a non-boxing topic—Any vet suffering PTSD, where should they go or who should they call for help?

“They should go down to their local VA (Veterans Affairs facility),” Herring said. “I know some VAs can be tough to deal with, but I gave it a chance and it honestly saved my life.”