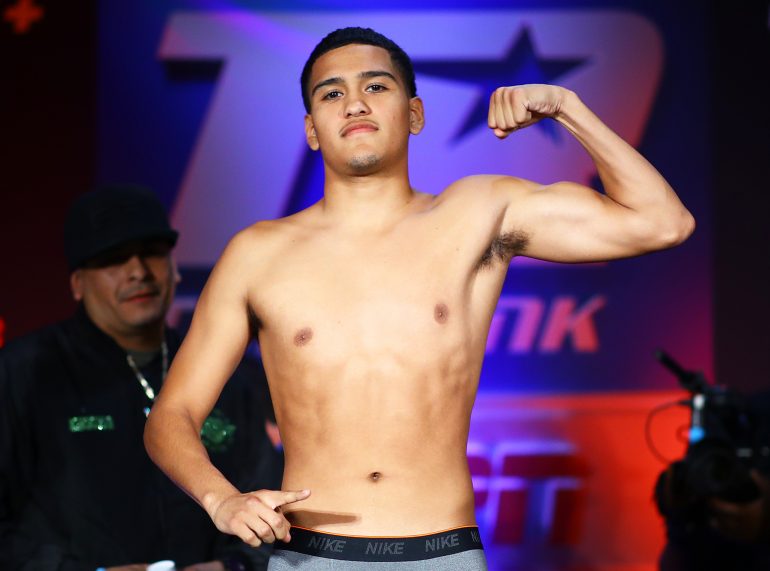 Flores, who defeated Miguel Angel Perez in his previous bout on Sept. 14, was fighting in his second eight-round bout of his career. From the opening bell, the 19-year-old closed the between himself and Mesquita, connecting to the head and body to the delight of the partisan crowd at Chukchansi Park, about a 75-minute drive from his hometown of Stockton.

Mesquita held his own during the middle rounds, connecting with lead or counter right hands to the head. An overhand right to the head at the end of round four caught Flores’ attention.

Attempting to build off the momentum, Mesquita was more assertive in his attack, choosing to stand and trade with Flores in the center of the ring. The rally was short-lived as Flores dominated the final two rounds by initiating the exchanges and landing the more-telling punches, forcing Mesquita to fight defensively until the final bell sounded.

Flores, who is trained by his father, Gabe, Sr., has now won eight of his last nine bouts by decision.

Welterweight Amir Imam dropped Marcos Mojica twice, ending matters in round four in his debut as a welterweight.

Imam (22-2, 19 knockouts), who had not fought since losing to Jose Ramirez for the vacant WBC junior welterweight title on Mar. 17 of last year, worked behind a consistent jab and utilizing his speed to outbox Mojica over the first couple of rounds. By the third round, Mojica (16-5-2, 12 KOs), who resides in Managua, Nicaragua, was in survival mode, backing up and rarely throwing more than one punch at a time.

The 29-year-old Imam scored the first of two knockdowns in round four, dropping Mojica to one knee from a left hood to the body. Mojica beat the count, but was dropped again from a combination from Imam. Referee Gerard White immediately stopped the bout at 56 seconds.

Falcao was the aggressor from the opening bell, ripping combinations to the head and body. Woods (16-9-1, 6 KOs), who resides in St. Petersburg, Florida, was game, but was beginning to feel the impact of Falcao’s punches. Falcao, who is trained by Robert Garcia, focused his attack to the body in round three, ripping hooks until Woods’ corner threw in the towel, prompting referee Edward Collantes to stop the bout at 2:18.

Featherweight and two-time Olympic gold medalist Robeisy Ramirez bounced back from his shocking loss to Adan Gonzales in his pro debut on Aug. 10, stopping Fernando Ibarra in the sixth and final round.

The Cuba-born fighter was more-aggressive Saturday night, sitting down on his punches and breaking Ibarra (2-2) down with each round. During the sixth round, Ramirez trapped Ibarra, who resides in Fairfield, California, in a corner, battering him with combinations to the head and body. Ibarra dropped to the canvas as referee Gerard White waved the fight off at 1:37.

Middleweight prospect Janibek Alimkhanuly stopped fringe contender Albert Onolunose of Canada in round six of a scheduled 10-round bout.

The southpaw Alimkhanuly (8-0, 4 KOs), who is originally from Kazakhstan and now lives and trains in Oxnard, outboxed Onolunose throughout much of the fight.

An overhand left to the head stunned Onolunose midway through the sixth round. Alimkhanuly followed up, landing a combinations to the head that forced the 39-year-old to drop to one knee against the ropes. Onolunose (24-3-1, 8 KOs) tried to fight back, but another barrage of punches from Alimkhanuly forced referee Eddie Hernandez to step in and stop the bout at 2:31.