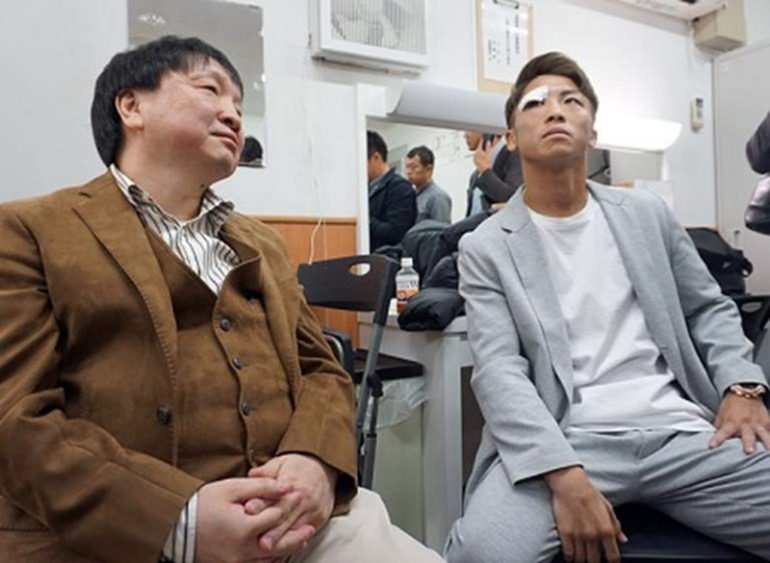 Naoya Inoue and his promoter Hideyuki Ohashi held a press conference to disclose injuries suffered during his slugfest with Nonito Donaire.
09
Nov
by Joe Koizumi

Naoya Inoue disclosed that he suffered fractures to his right eye socket (orbital bone) during his hard-fought victory over Nonito Donaire in Saitama, Japan on Thursday, according to hall-of-fame Japanese journalist Joe Koizumi.

Inoue (19-0, 16 KOs) and his promoter Hideyuki Ohashi revealed the diagnosis during a press gathering on Saturday at Korakuen Hall in Tokyo. The Ring Magazine bantamweight champion, who won the World Boxing Super Series tournament with his unanimous decision over Donaire, assured the Japanese media that the facial injuries he incurred against the Filipino legend, which includes fractures under his nose, are not serious enough to require surgery.

“The doctor said there would be no need for surgery, but I’ll have a re-examination after a month,” Inoue, who consulted the specialist on Friday, told the press. “Then I will decide my training schedule thereafter.”

After face timing with @naoyainoue_410 , I heard about his injuries. Relieved he doesn't need surgery and of course, sending healing prayers on the way! pic.twitter.com/1Xm9y2HEZS

Ohashi, a 54-year-old former two-time strawweight titleholder, is proud of his star fighter but lamented that the injuries will likely delay his anticipated return to the U.S. (and ESPN debut) under the Top Rank promotional banner.

“Despite his fracture and pain from the second round on, Naoya displayed such a great performance with the Filipino Flash,” he said. “It must become the new chapter of the Monster legend that proves his heart.

“Although Naoya announced his promotional agreement with Top Rank just after the invaluable victory, his new-year campaign next spring will have to be delayed.”

Inoue took a solid left hook from Donaire in Round 2 of their WBSS final, and he confessed after the bout that he had a double vision from that point on during the fight. Inoue also suffered nose bleeding unlike in his previous bouts midway in the slugfest.