Ring Ratings Update: Canelo Alvarez advances to pound-for-pound No. 1 as the debate continues 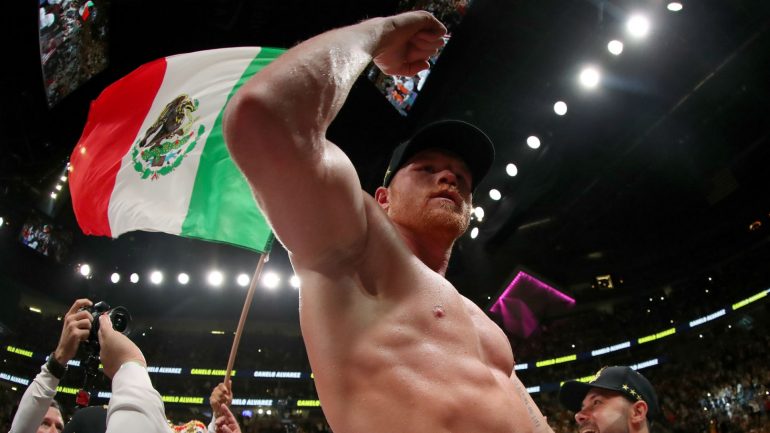 The Ring Ratings Panel has been in debate mode with the mythical pound-for-pound rankings since the Errol Spence Jr.-Shawn Porter fight in late September. The back-and-forth opinions and criteria between the panelists and Editorial Board members continued with light heavyweight world-beater Artur Beterbiev (who was voted to the No. 9 spot), newly crowned Ring Magazine 140-pound champ Josh Taylor (who was denied by the panel despite the thumbs up from the Editorial Board), and, most recently, No. 3-rated Canelo Alvarez, the reigning Ring Magazine middleweight champ who won the WBO light heavyweight title with an 11th-round stoppage of Sergey Kovalev this past Saturday in Las Vegas.

The debate will probably continue next week thanks to No. 4-rated Naoya Inoue’s dramatic unanimous decision over future hall-of-famer Nonito Donaire in their epic World Boxing Super Series final in Saitama, Japan, on Thursday.

But the past five days have been focused on Alvarez (53-1-2, 36 KOs) and his pound-for-pound ranking.

The question the Panel debated was how big of a statement was his victory considering where the 36-year-old Russian veteran is in his career, the close nature of the fight prior the KO, and past controversies. Was beating this version of Kovalev enough to advance Alvarez past Nos. 1 and 2 – Vasiliy Lomachenko and Terence Crawford? The panelists and the Editorial Board (consisting of Associate Editor Tom Gray, Managing Editor Brian Harty and Yours Truly) let their hands go (as we did with Taylor, Beterbiev and Spence). Read on for the “blow by blow”:

Panelist Anson Wainwright kicked off the debate by suggesting that Canelo advance one spot, to No. 2, in the pound-for-pound rankings.

“Canelo should move up one place after stopping Sergey Kovalev,” Wainwright said. “I give him huge credit for stepping up and rolling the dice and the educated way he went about his business makes me think he deserves a move up.”

Gray, who had pushed so hard for Josh Taylor following his fellow Scotsman’s thrilling WBSS final victory over top-rated junior welterweight Regis Prograis, did Wainwright one better and suggested that Alvarez jump all the way to the top spot.

“Canelo to No. 1 for me,” said the globe-trotting associate editor, who covered Inoue-Donaire for the publication. “His resume is insane and his march through the weights cannot be ignored.”

“There are con arguments about the Gennadiy Golovkin controversies and Kovalev’s decline, but this is the essence of ‘pound for pound’ for me,” said the managing editor.

Panelist Adam Abramowitz also agreed with Alvarez’s advancement to No. 1.

“Based on where we currently have fighters ranked, I agree that Canelo should be above both Lomachenko and Crawford,” he said. “Personally, I think the only fighter who has as good as a case for No. 1 is Inoue, but that’s something for another day.”

“I really appreciate what Canelo has done running up the weight classes, but I had him losing the first GGG fight and let’s not forget the PED concerns, either,” said Mulcahey. “Loma and Inoue have also covered some space in weight classes. I can see the argument for No. 1, but I would move Canelo to No. 2 at best.”

Newer panelist Michael Montero listed out several reasons why he believes Alvarez should stay where he is in the mythical rankings.

“At the risk of sounding like a Canelo detractor (which I absolutely am NOT), I think we have to be really careful not to get caught up in the moment here. There are some asterisks…

Canelo’s win over Kovalev was a carefully-calculated, impressive, victory that makes him a three-division titlist (154, 168, 175), but only a one-division champion (160).”

Panelist Tris Dixon seemed torn between the arguments, but ultimately gave his vote for a No. 2 placement.

“Tough one,” said the English journalist/editor/podcaster. “I agree with almost all that has been written, pro- and anti-Canelo.

“Not helpful, I know. But the PED thing is interesting and that it means more to some than others. I hate PED use. But unless we are going above and beyond to penalize these guys, can we count bans? And where does that leave someone like (Dillian) Whyte where we will probably never know what happened? And what about those who fail via contamination? I think that’s BS but until someone in the sport calls it and everyone keeps fighting, should we hold fighters to different standards?

“It’s unrelated, but this year (Shane) Mosley was on the IBHOF ballot and I believe he’s the first one in who got caught red handed, unless you count (Erik) Morales,” continued the British Adonis. “Would be interested to hear your take on that. Again, with rapists and murderers in there, the bar is morally low already, I know.

“I’d bring Canelo in at No. 2 at 175 pounds and begrudgingly put him above Crawford (in the pound for pound), because of the weight class and beating one of the top guys even if Kovalev was past his best, he was the one who properly knocked him off.”

Panelist Diego Morilla added his two cents all the way from Argentina (providing, along with the approval of Yours Truly, the majority votes Alvarez needed to gain the pole position in The Ring’s pound-for-pound top 10):

“Canelo at No. 1 is a good choice, even with all the asterisks that remain next to his name,” said the editor of the Spanish edition of The Ring digital. “His resume is three times bigger than Loma’s, both in quality and just sheer number of bouts, and his accomplishments are there. We moved Loma up based partly on the (Jorge) Linares win, and Kovalev is Canelo’s Linares: a great fighter who still looks great in the ring but is ripe to be chopped down to size by the perfect candidate.

“And to top it all off, if Inoue stops Nonito inside five rounds, maybe this discussion will be proven pointless. So yeah, the guy stopped a great fighter with a one-two after trailing (on some people’s) scorecards, two divisions above his weight. Let’s give him the props he deserves.”

Pound for pound – Canelo Alvarez advances to No. 1.

Cruiserweight – Lawrence Okolie advances from No. 8 to No. 7 following a seventh-round stoppage of Yves Ngabu, who drops out of the rankings, which makes room for Alexsei Papin to enter at No. 10.

Light heavyweight – Canelo enters at No. 2. Kovalev drops to No. 5.

Junior middleweight – Brian Castano holds onto the No. 5 spot with a TKO (due to a shoulder injury) of unrated Wale Omotoso. Erickson Lubin holds onto No. 9 following a 10-round decision over unrated Nathaniel Gallimore.

Junior welterweight – Josh Taylor is the new champion. Regis Prograis, who fought valiantly during the title unification bout, drops from No. 1 to No. 2. Jose Ramirez assumes the No. 1 spot. Arnold Barboza enters at No. 10.

Lightweight – Anthony Crolla exits the rankings after announcing his retirement after a close decision over Frank Urquiaga. Ryan Garcia advances to No. 6 following a first-round blowout of unrated Romero Duno. Veteran Yvan Mendy re-enters at No. 10.

Featherweight – Shakur Stevenson advances from No. 7 to No. 6 with a near shutout decision over No. 10-rated Joet Gonzalez, who exits and is replaced by Mark Magsayo.

Bantamweight – Joshua Greer holds his No. 9 spot after a razor thin 1—round decision over unrated Antonio Nieves.

Junior flyweight – Elwin Soto holds onto his No. 5 spot following a close, spirited unanimous decision over Edward Heno, who drops one spot to No. 8.

Strawweight – Wanheng Menayothin advances to No. 1 following a unanimous decision over Simpiwe Konkco, who drops to No. 8.