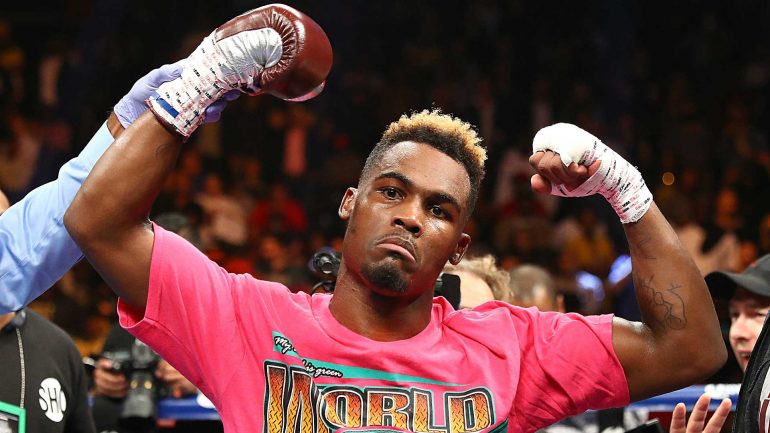 Jermell Charlo did a hit on Wednesday’s PBC podcast and the Texan spoke about his forthcoming 154-pound title scrap against Tony Harrison.

Charlo meets the Michigan boxer on Dec. 21 in California. The match was delayed when Harrison hurt his ankle in camp. Charlo (32-1, 16 knockouts) speculated aloud if the injury was pre-existing and he tweaked it. He said he heard the news, and yes, wondered if it was legit. He admitted, then, that he basically thinks the ankle thing was “BS,” because he feels Harrison wasn’t prepared.

In their first tango, Harrison (28-2, 21 KOs) snagged the WBC strap off of Charlo, and people were split on who they believed won the faceoff. “You have to do a lot more than what he did,” to get the belt off the champ, Charlo told PBC hosts Kenneth Bouhairie and Michael Rosenthal.

Jermell continued, saying that we will see how the current champ proceeds. He then said he doesn’t like to do interviews, and didn’t want to do this podcast hit, because people can twist his words, in his mind.

Yes, it was a pretty stream of consciousness going on here. Charlo said going into the last bout, he had legal issues hanging over his head. He got acquitted of felony domestic assault and misdemeanor assault charges for allegedly choking and striking a woman on May 16, 2018.

The hitter rejected a plea deal, though he was facing a three-to-10-year sentence, if convicted.

More from the junior middleweight: He said he wants to show an even better version of himself, he wishes to master this art of pugilism. A B-plus day for Jermell beats an A-grade Harrison, in his mind.

Charlo admitted he had to change things up. He said he was making “massive mistakes” outside the ring, which he didn’t specify. He talked about over-spending, but not much beyond what was going on. “I’m bringing a different animal,” he declared of his demeanor going into the December rematch.

Jermell was asked about folks calling him out. He then showed fire, and said he can still be a bad “em-effer;” he still has a sharper edge to him, even though he’s trying to be that better man. More riffing: He said he no longer pays attention to rankings. He won’t pay attention to belts; he believes he has an invisible belt around his waist now.

It is clear he still has axes to grind; he railed against unspecified persons. And that will result in him looking to get KOs, make it conclusive, so no one can screw him, he stated.

But on Dec. 21, he will be on TV, and yes, he is curious himself to see how making changes outside the ring will affect him. Getting dialed in mentally, seeing that light, he believes, that will make him that much better.

And then, beyond that, he is thinking maybe Julian “J-Rock” Williams will be in front of him down the near line. J-Rock has been cool with him, he said, though the Philly fighter talked stuff to Jermall (who stopped J-Rock in their December 2016 battle). J-Rock isn’t better than him, skills wise, Jermell said.

He also let us know who he looks up to: Bruce Lee, and Muhammad Ali, an undersized guy, and a guy who had to deal with so much flak; those two gents are role models for him.

Jermell seeks to boost his legacy, and he wants to make it clear on Dec. 21 what sort of fighter he is.

He spoke on his “Lions Only” promotional company, which he declared was all his, so the guess here is that Jermall isn’t as involved. Jermell wants to be aligned with fighters who are hungry, who need to get past hard upbringings. “I might even be promoting two celebrities,” he said, referring to mystery bold-faced names who might sort out a beef in a ring. “End of the day, I’m working my tail off, being un-traditional.”

Jermell gave Al Haymon his props, and then he said he made money before boxing. He worked on the streets, he said, and he didn’t need to make money in fighting. He called Haymon “awesome.”

There will be more to come, and Lions Only will be doing more and more down the near line. Bouhairie asked where his entrepreneurial drive came from. He didn’t want to answer to others so much, “working for something else is not my thing.” He also owned a landscaping company, while he was on the come up in boxing, and that makes him respect hard workers and people who own their business who also do the hard. He said he’s owned a car wash, and that he isn’t just a twin. He has a 10-year-old son, he shared, so yes, there’s more to him than most know about.

Jermell said that he wanted to pay for Patrick Day’s funeral. He spoke to Patrick’s mom, and he appreciates the interaction they had. Danny Jacobs, though, took care of those costs. “I just made a very large donation, $7,500 or so,” he stated. He hopes that people would step up if something dire happened to him, he told the hosts.

Boxing is what it is, so it’s hard to legislate. It’s hard to make the lethality rate zero. It’s an ugly game, and life can be ugly, Jermell said.

He is hitting the prime of his athletic life, he was told, so what else does he want to accomplish? He wants to get deserved respect, and also, outside of boxing, he wishes to be someone who young ones can look up to as a business role model.

Here is the podcast, if you wish to listen for yourself.