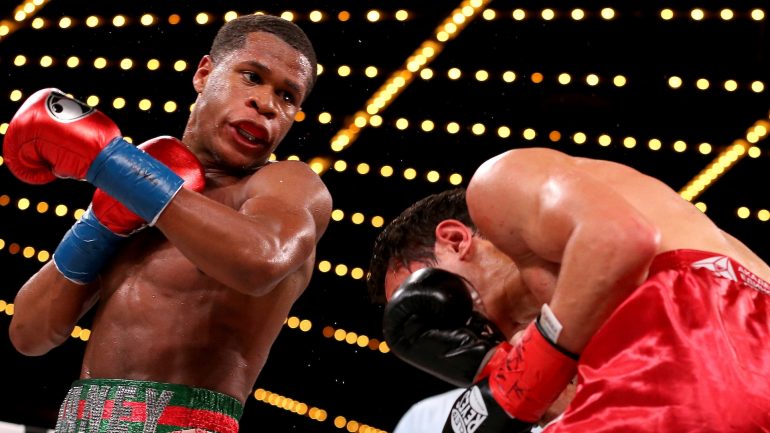 Haney (23-0, 15 knockouts), who resides in Las Vegas, last fought on Sept. 13 in New York City, stopping Russia’s Zaur Abdullaev after the fourth round in a WBC world title elimination bout.

At last week’s WBC convention in Cancun, the sanctioning body ruled Haney would be elevated to full titleholder and Vasiliy Lomachenko would be ‘the franchise champion.’

The 20-year-old Haney, who is ranked No. 2 by The Ring, is glad the WBC ruled in his favor and can focus on landing bigger fighters to prove he is the best lightweight in boxing today.

“I’m happy we got this deal done,” said Haney, who scored a highlight-reel knockout win over Mexico’s Antonio Moran on May 25. “I’m not just a WBC world champion that’s holding someone else’s belt. I’m the sole champion, and I will defend the lightweight world title on Nov. 9. I’ve been working hard and I’m extremely focused.”

“All the fans at Staples Center and the millions watching on DAZN are going to witness another dominant performance. I’m going to continue to show the world that I’m the best in my division. Alfredo Santiago is undefeated. He’s hungry and he’s coming to win. I take every fight very serious and this fight is no different. Tune in next Saturday and you’ll see that the hype is real.”

Haney, who will turn 21 on Nov. 17, was penciled to face contender Petr Petrov, but the WBC did not approve him. Instead Haney will face a fighter who be fighting in the United States and will take a major step-up in opposition against Haney.

The 24-year-old also has a majority-decision victory over Jayson Velez in December of 2016. Santiago believes he has what it takes to pull off the upset victory over Haney.

“This is the moment that I’ve been dreaming of since I was a kid, and the one I’ve been waiting for since I became a boxer,” said Santiago. “I am physically and mentally ready, and I am going to show who the best lightweight in the world is. Mr. Haney is a formidable fighter who chose the wrong opponent. He cannot beat me. This is my time.”

Also fighting on the card will be Billy Joe Saunders defending his WBO super middleweight title against Argentina’s Marcelo Coceres and the rematch between YouTube stars KSI and Logan Paul.