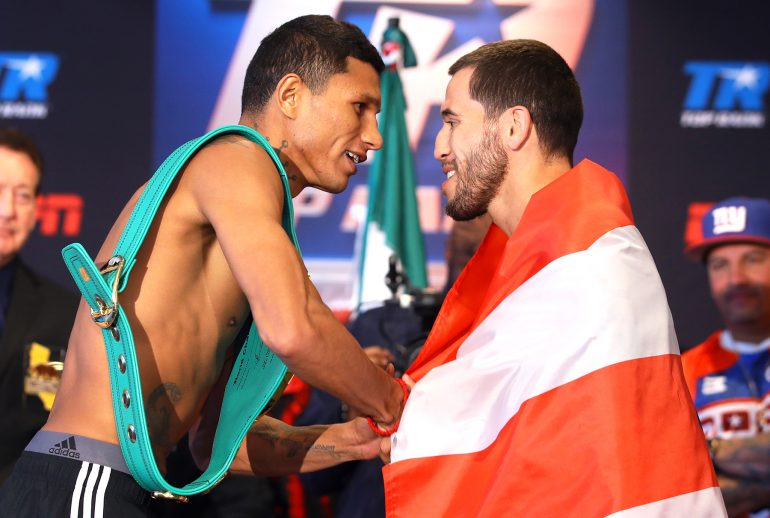 Berchelt, who resides in Merida, Mexico, was making the sixth defense of his WBC title that he won from Francisco Vargas in January of 2017. In his last bout on May 11, Berchelt battered Vargas before the fight was stopped before the start of the seventh round.

Sosa stopped Haskell Rhodes in round seven of his last bout on Aug. 10 in Philadelphia. The 31-year-old has won his last three bouts since losing by majority decision to Yuriorkis Gamboa in November of 2017.

Playing off Berchelt notoriously starting slow in fights, Sosa did well by countering Berchelt in the opening round. Sosa’s offense was short-lived as Berchelt’s punches began taking their toll.

About midway through the second round, a barrage of punches dropped Sosa to the canvas. Sosa beat the count and chose to trade with Berchelt, who landed several vicious punches that seemed to shake the Puerto Rican-American until the round ended.

Sosa continued to be game, standing in the pocket and trading in the center of the ring, but Berchelt’s blistering punches, especially to the body, broke Sosa down.

The end came during the final minute of round four when Berchelt dropped Sosa with a right-left combination to the head, ending with a well-placed left hook to the body. Sosa beat the count and tried to fight back, but was pinned against the ropes, where Berchelt punished him. Sosa’s corner wisely threw in the towel, prompting referee Jack Reiss to stop the bout at 2:56.

Berchelt has stated in the past he is open to facing any of the world titleholders at 130 pounds, but is willing to face Oscar Valdez, who is now campaigning at 130 pounds.

“It was an excellent fight tonight,” said Berchelt, who is co-promoted by Top Rank and Zanfer Promotions. “I respect Jason. He’s a great fighter. He came to fight and I have a lot of love for him.”

Valdez is scheduled to face Andres Gutierrez in his debut at junior lightweight on Nov. 30 in Las Vegas.