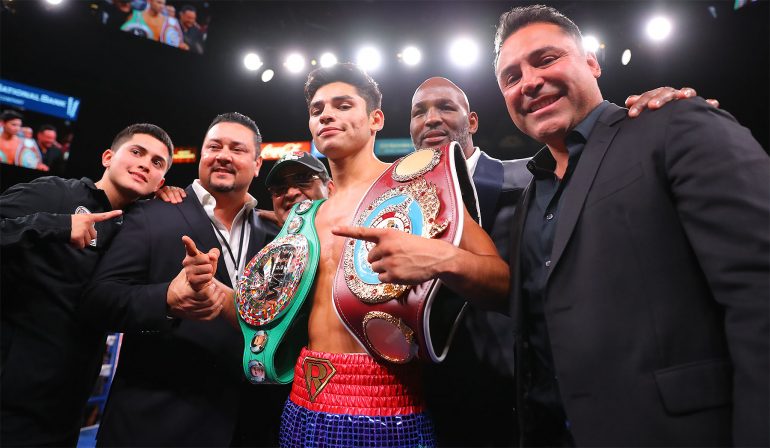 LAS VEGAS – Ryan Garcia needed to make a statement after all the drama he’s been through this year and the young lightweight contender delivered with a first-round KO of dangerous fringe contender Romero Duno in the co-main event to the Canelo Alvarez-Sergey Kovalev light heavyweight title bout on Saturday at MGM Grand.

Duno, a 24-year-old puncher from the Philippines, was viewed as a threat because of his power, aggressive style and solid whiskers, but Garcia proved that he could take a good shot and deliver shots powerful enough to dent the Filipino’s chin.

“All respect to Duno, he came to fight, he came in shape, he caught me with an overhand right and I took it and from there I knew I could keep taking them and keep coming at him,” Garcia said during his post-fight interview on DAZN. “When I took his best shot, I knew alright, I got him. Everybody knows he has a big overhand right, he’s put a lot of people to sleep with that, and then when I took it, I thought – oh okay, that’s what it is. And I felt good from then.”

Garcia (19-0, 16 KOs) had personal and professional beefs that have played out for months on social media this year, the most recent conflict between he and his promoter, Golden Boy, which flared up after his last opponent (Avery Sparrow) fell out of a September fight at the 11th hour. Golden Boy offered Romero Duno as a last-minute substitute and Garcia declined citing that he wanted to be paid for that fight.

The two sides went at it on Twitter but cooler heads prevailed during a meeting that resulted in a new contract for Garcia, one which the 21-year-old Californian boasts is the most lucrative of any prospect in boxing. The cherry on top of his new deal with Golden Boy was a spot underneath the Canelo-Kovalev main event — against the lightweight that some said he was afraid to fight. 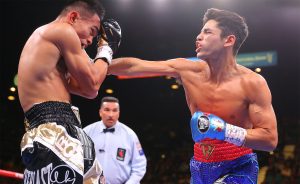 But once the bell rang, neither Garcia nor Duno fought with any fear. The young up-and-comers came out gun blazing, both loading up with big right hands. The difference in the brief fight was Garcia’s ability to move and control distance with his jab, which set up right hands and left hooks. It was a lead right-left hook combination that clipped the hard-charging Filipino in the middle of the ring and the middle of the opening round.

“He came at me like a bull,” Garcia said. “I was like damn, oh shoot, I was trying to move out the way. I’m like, okay I’m going to start swinging. I’m going to let mine go then. I tried to fake with the overhand, jab right, bang bang, and it’s over – temple shot. Once you hit the temple, it’s almost over right there. There’s three places to knock somebody out, it’s right in the temple, behind the ear, and right in the chin. You hit anywhere with a solid punch and it’s over.”

Duno (21-2, 16 KOs) went down in a heap and attempted to roll over onto his hands and knees but was too groggy to coordinate standing. Referee Tony Weeks waved it off at 1:38 of the round. And just like that, Garcia, whose popularity continues to climb, proved to be worth every cent of his new contract.

“I just want better competition, the more I step up,” he said. “I’m only 21 and a lot of people forget that. But I’m going at my pace, whatever I feel I’m ready for, I’ll take on. Those fights down the line are huge fights, once my team feels I’m prepared. I’m always going to listen to my team.”