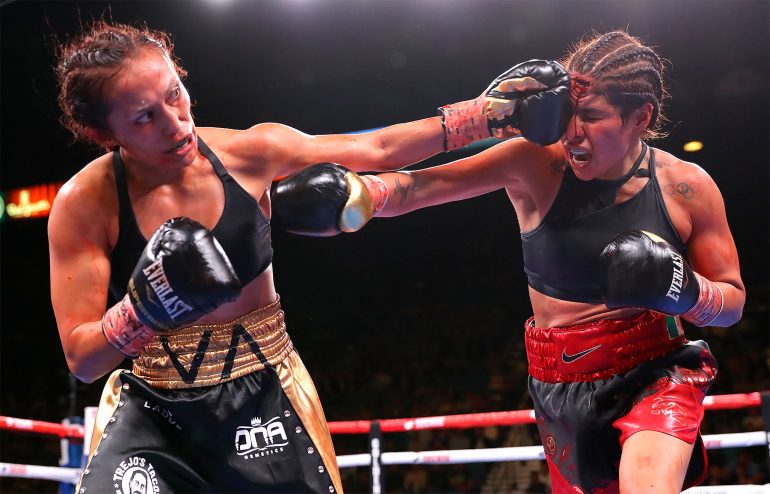 LAS VEGAS – The bad blood between Seniesa Estrada and Marlen Esparza was real. And blood turned out to be factor in how their grudge match would play out.

Esparza suffered a horrific cut on the hairline above her forehead after an accidental clash of heads in Round 5 of the scheduled 10-round bout, and the gash poured blood down her face for the next four rounds. She was deemed unfit to continue (because of the cut) after the ninth round so the bout went to a technical decision won by Estrada, who was comfortably ahead by scores of 90-81, 89-82 and 88-83.

The fight was more intense than the official scorecards would indicate. After two years of trash talk, the skilled female flyweights, both signed to Golden Boy Promotions, were eager to go at it on the undercard of the Canelo Alvarez-Sergey Kovalev light heavyweight title bout and they let the leather fly over nine 3-minute rounds (2-minute rounds are the norm in women’s boxing matches). It was a hotly contested, technical battle of attrition, and it was Estrada (18-0, 7 KOs), the slightly more versatile and crafty odds favorite, who prevailed.

“I had an amazing training camp and I felt great tonight,” Estrada said after the fight. “Head butt or not, I still whooped her ass every round. I didn’t really target it too much. I felt great, I’m made for the late rounds. I can go 15 rounds, take it back old school.

“The beef is not settled. Respect to her team, but I still don’t like her.”

Esparza (7-1,  1 KO), a 2012 Olympic bronze medalist, said should could have performed better had the blood from her cut not impeded her vision as much as it did.

“I’m sorry guys I couldn’t continue but I couldn’t see anything,” she said during her post-fight interview on DAZN. “I could have stopped after the 3rd round, 4th round, whenever it happened, but it was really hard to deal with, it was really hard to see. I didn’t think I was losing that many rounds at all though. She says she has a lot of power, she doesn’t, it was a head butt. I continued fighting but I had to stop because I couldn’t see. I think it was a poor decision. Some of the rounds she did win, but it wasn’t like that. I couldn’t see.”