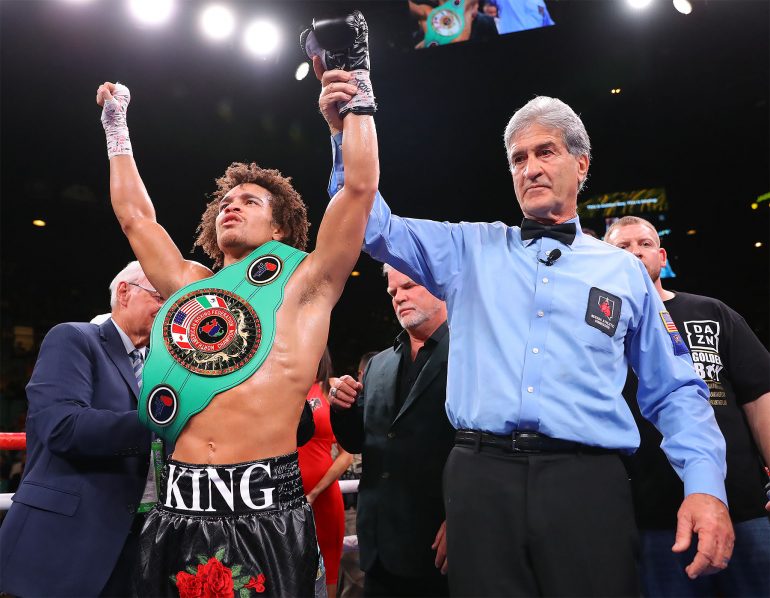 LAS VEGAS – The Blair Cobbs show continues to be a thrill a minute.

The welterweight fringe contender, whose flamboyant “Flair” ring persona borrows a lot from pro wrestling, is as vulnerable as he is dynamic in the boxing ring. The quick, mobile and twitchy southpaw once again had to get up from a knockdown before scoring a stoppage in a tit-for-tat fight. Last time it was vs. unbeaten Steve Villalobos, this time it was Carlos Ortiz (11-5, 11 KOs), who scored a technical knockdown (with a left cross) in the final seconds of the opening round of their NABF title bout.

Cobbs (13-0-1, 9 KOs) looked a bit shaky in the next couple of rounds as he pecked and poked at his hardnosed Mexican opponent while on the move, but he gradually closed the distance and gained the confidence to stand and trade with a fellow southpaw who may have hit a little bit harder than he did. Cobbs, a Las Vegas resident with roots all over the place, buzzed Ortiz with a straight left in Round 5 and then dropped him with a right hook in Round 6. Ortiz’s corner kept him on his stool after the sixth on the advice of referee Vic Draculich.

“It was a wonderful performance, I tip my hat off to my opponent,” Cobbs said during his post-fight interview with DAZN’s Chris Manix. “He’s a tremendous athlete and had tremendous power. Ortiz took a tremendous shot to the back of my head, but I just got right back up. I got right back on my horse and kept persevering. I’m working and getting better and better every time, there’s nothing I can’t do. Now it’s game time baby. I’m ready for anybody, anytime, anywhere. Nobody can stop me, viva Mexico!”

Cobbs’ post-fight interview was just as entertaining as his fight, a mixture of graciousness and bombastic boasts (and Rick Flair-inspired “Whooooos!”), but it got a reaction from the audience inside the MGM Grand Garden Arena. Some booed, some cheered, some let out “Whoo!” of their own.

Cobbs is a genuine personality and he moves the needle. He’s also got legitimate athletic talent and boxing ability but at the advanced age of 29, he’s still a work in progress. There are flaws that need to be ironed out before his promoter, Golden Boy, advances him into bouts against the real contenders of the 147-pound division.

Cobbs has come a long way in 2019, winning three of his four bouts by stoppage (vs. solid opposition), and garnering the attention of general sports media and fans on social media. How far can he go? Who knows, but it will be a fun ride.