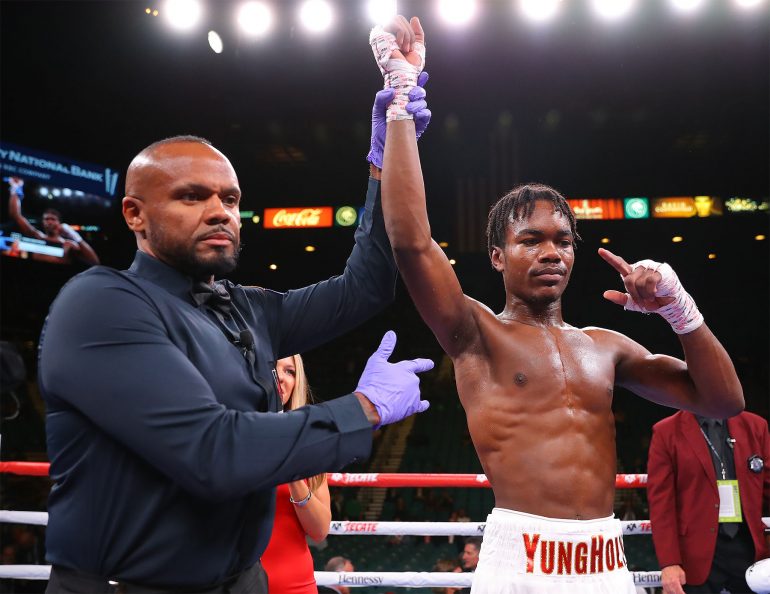 LAS VEGAS – Evan Holyfield’s pro debut took all of 16 seconds, so we don’t if the 22-year-old junior middleweight and son of legendary cruiserweight/heavyweight champ Evander Holyfield is a chip off the ole block.

But we know he was too much for poor, hapless Nick Winstead (0-2) who overwhelmed from the proverbial get-go.

Holyfield, billed out of Atlanta, had between 80-85 amateur bouts at the regional/state level and he’s got a strong team behind him with manager-trainer Maurice “Termite” Watkins (a former world title challenger who retired with a 61-5-2 record) and nutritional guru Tim Hallmark (who was his father’s chief conditioning coach). He can be matched tougher than he was tonight.

The sparse crowd that gathered inside a drafty MGM Grand Garden Arena to watch the early undercard bouts of the Canelo Alvarez-Sergey Kovalev light heavyweight title bout booed the stoppage (and poor matchup), but given the obvious talent and athleticism of “Yung Holy,” the tall (6-foot-2) and rangy 154 pounder will be back soon against better opposition. Holyfield is promoted by Main Events. 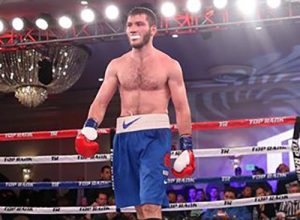 Murtazaliev, who was a little more aggressive and busier on the inside, won by scores of 120-108, 119-109 and 118-110. Despite the one-sided official scorecards, it was a competitive, mainly tactical boxing match that featured heated exchanges in spots.

Murtazaliev, who was fighting with new trainer Virgil Hunter in his corner for the first time, is now in line to challenge The Ring’s No. 1-rated junior middleweight Julian Williams, who holds both the IBF and WBA 154-pound titles.

He will need to if he hopes to compete with Williams.

Texas prodigy Tristan Kalkreuth (3-0, 2 KOs), a 17-year-old light heavyweight/cruiserweight prospect who stands at least 6-foot-4, outboxed and outhustled the spirited efforts for Oklahoma native Twon Smith (3-4, 2 KOs), who had his moments. Kalkreuth, a high school student who is managed by Lester Bedford and promoted by Golden Boy Promotions, won by scores of 40-36 (twice) and 39-37.

Middleweight technician Meiirim Nursultanov (13-0, 8 KOs) pounded out a 10-round unanimous decision over Cristian Olivas (16-6, 13 KOs). Nursultanov, who is managed by Egis Klimas and promoted by Main Events, won by shutout (three scores of 100-90). He’s a Kazakhstan native based in Southern California where he trains in Oxnard and Northridge under Buddy McGirt’s guidance. 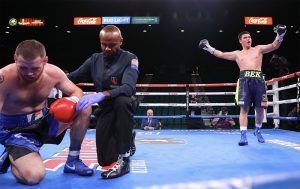 Collard (4-2-3, 1 KO) to a fourth-round stoppage (2:22 of the round). Melikuziev, a brute strong body snatcher from Uzbekistan (now based in Indio, California where he’s trained by Joel Diaz), recently signed with Golden Boy Promotions.

He flattened his first two professional opponents with vicious body shots in the opening round. Collard, a Las Vegas resident, was able to extend “Bek Bully” a bit, though he took a frightful pounding to the midsection.

“I was very surprised at how durable he was,” said Mulekuziev, who is managed by Vadim Kornilov. “But it was a good experience. He was very tough. I needed this to get rounds of experience.”