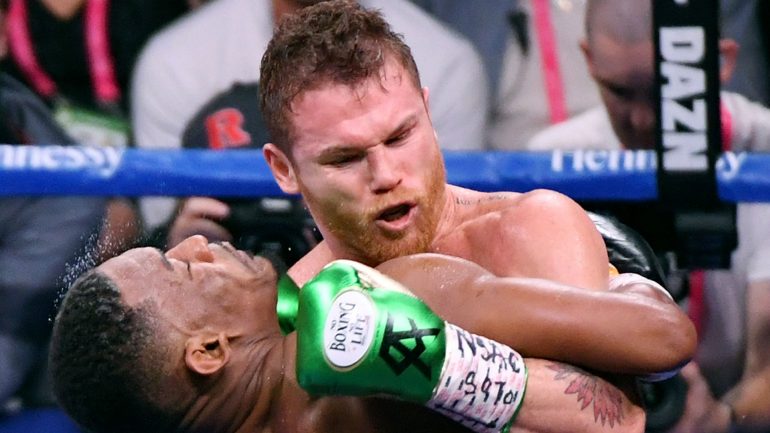 Alvarez stepped up to take out an overmatched Rocky Fielding and win the WBA super middleweight title last December before reverting to his more natural home of the middleweight division.

That is where the 29-year-old Mexican’s long-term future is expected to lie regardless of the weekend outcome, although victory over the aging but still-fearsome Kovalev would have to rank among his finest accomplishments.

Here, we look back at some of Canelo’s best nights in the ring.

James Kirkland had been dubbed a “mini Mike Tyson” before he came face to face with Canelo. Erislandy Lara worked Alvarez hard in his prior fight 10 months beforehand, but the Mexican was back in top form at Houston’s Minute Maid Park. Kirkland was first knocked down with a right in the opening round and lasted only until the third before another spectacular blow sent him crashing over and stopped the fight early.

After taking out Kirkland, Miguel Cotto and the WBC middleweight title were next on Canelo’s list. The judges’ scores — 117-111, 118-110 and 119-109 — had Alvarez the clear winner as he claimed the belt from the in-form Puerto Rican, landing a big win for Mexico after a complete performance in which Cotto was out-thought and out-fought.

A huge fight for Mexico saw compatriots Canelo and Chavez do battle during the 2017 Cinco de Mayo weekend. Victory secured bragging rights for Canelo and it never looked in doubt, as his opponent was schooled and scarcely landed a punch as all three judges called the fight 120-108 in a simple points decision.

This was a victory long in the making. Canelo and Golovkin had battled to an entertaining draw a year earlier, before a rematch was put on hold as Alvarez served a six-month ban for failing a drug test. Despite many observers judging it differently, Canelo was awarded a majority decision after 12 rounds.

After dispatching Fielding, Alvarez underlined his status as the world’s premier middleweight with a 12-round win over the accomplished Jacobs. Although plenty of the rounds were competitive and the scores rightly close, there was none of the controversy that followed Canelo’s verdicts against Golovkin after the Mexican built up an early lead in a well-rounded display.