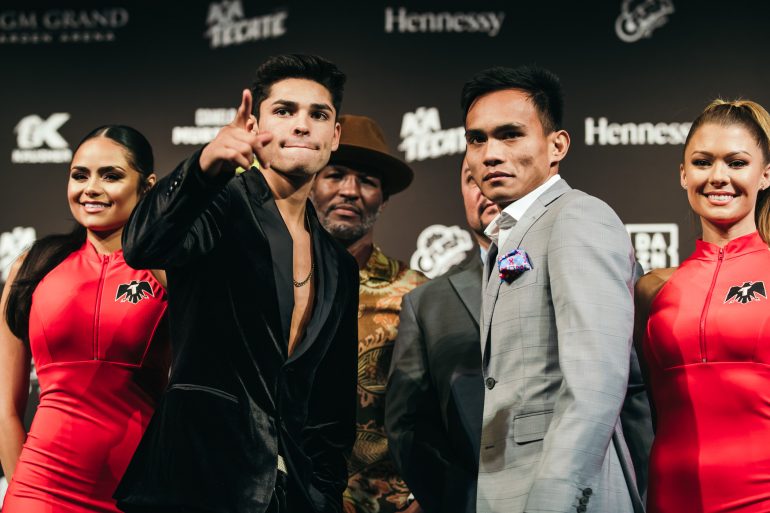 Romero Duno isn’t the type of boxer you’ll find down at the poker tables in the casinos at two in the morning. His idea of unwinding on fight week is laying in his hotel room bed, playing video games on his phone. It isn’t uncommon for his room to be full of various associates and assistants, all with phones out, tapping screens like it’s a gamer convention.

It was no different on Wednesday evening, following a public workout to promote his bout against Ryan Garcia, as he conducted an interview via Facebook messenger, all the while playing Call of Duty on his phone. One thing you won’t see him do much of on his phone is his check his Instagram.

Duno’s co-promoter Jim Claude Manangquil says that while Garcia’s posts showing him throwing haymakers at the punching bag get millions of views, it does little to impress them.

“That’s what his style is, it’s working for him, but Duno is nothing like that. We’re boxing people, we know what’s true or not,” said Manangquil.

The fight will be the co-feature to the Canelo Alvarez vs. Sergey Kovalev at the MGM Grand in Las Vegas, and will air live on DAZN.

Though no world title is at stake, the fight represents a significant junction for both fighters’ careers. They are the two highest profile lightweight prospects in the Golden Boy Promotions stable, and a win over the other would be a major credibility boost to their careers.

“It feels like a world title fight because my opponent has a big following,” said Duno, who was raised in Tagum City, Philippines and is trained by former WBC junior flyweight titleholder Rodel Mayol.

They’re absolute contrasts in everything but professions. In Garcia, Duno sees the popular star he has yet to become. In Duno, Garcia sees the rugged fighter who has gained the respect from purists that still evades him.

“You can see in the style that they fight, [Garcia is] flashy and fights like a rich guy. You can see how hard [Duno’s] life is in how he fights. He always fights like he has nothing to lose, because he came from nothing,” said Manangquil. 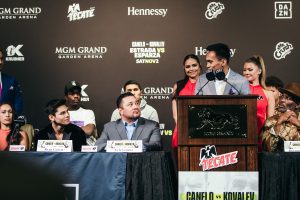 In the end, Manangquil says it was social media that helped put the fight together, after an initial round of discussions for a September meeting, and another attempt to put it together on short notice after Garcia’s opponent for that fight was arrested at the weigh-in, failed to produce the fight.

“After it went public that he turned us down, it was not that hard because all the social media was bashing him, and that’s his life, social media,” said Manangquil, who has handled Duno’s career since he turned pro in 2014 alongside his Sanman Promotions partner Dexter Tan. “It was easy for him to get pissed and take that fight because everyone on social media wanted it.”

Garcia admitted at Thursday’s undercard press card that Duno is a “dangerous” opponent, and took exception to some of Duno’s attempts to goad him into the fight, like wearing a shirt that read “Stop Running” after Duno’s stoppage win over Ivan Delgado in September. He says that, even if he wins on Saturday, he doesn’t expect to get the respect he feels he’s due.

“I feel like my skills are better. I just feel like I’m going to win fairly easy. I don’t see it going all ten rounds,” said Garcia, while wearing a blazer and chain, sans dress shirt. Duno was far more conventional in his attire, wearing a gray suit and white button-down Oxford.

Duno says he has seen some improvements in Garcia since he switched trainers to Eddy Reynoso, who also trains Alvarez, but expects Garcia to fall into some of his old patterns as the fight progresses.

“It really depends on him. I think if he cannot handle my power, we can easily make this a brawl and that will be my chance,” said Duno.

One of the changes Duno has made for this camp is working with Angel “Memo” Heredia, the former performance enhancing drugs distributor turned Las Vegas-based conditioning coach. Heredia has been working with several Filipino boxers, including John Riel Casimero, Marlon Tapales and Jhack Tepora. Manangquil says any added boost, however small, could be the difference in the fight.