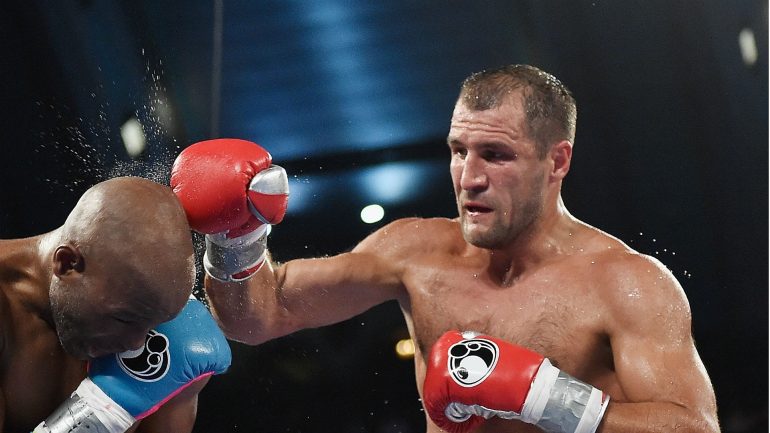 Sergey Kovalev will contest the 17th consecutive world title bout of a decorated career on Saturday in Las Vegas when he squares off against pound-for-pound superstar Saul “Canelo” Alvarez.

While middleweight king Alvarez is stepping up two weight classes in a bid to become a four-weight world champion, the 175-pound light heavyweight ranks have been Kovalev’s domain for much of the past decade.

The 36-year-old is currently in possession of the WBO portion of the title, a belt he first got his hands on more than six years ago.

Canelo will arguably present a challenge unlike anything Kovalev has had to reckon with over the course of a 38-fight career but, as the triumphs below show, his combination of classic skills and chilling power usually find the answer.

An emphatic breakout performance away from home earned Kovalev his first world title as he battered Cleverly, then one of British boxing’s brightest stars, to a fourth-round loss. The champion’s home crowd in Cardiff was stunned as he wilted under a relentless assault, going down twice in the third before referee Terry O’Connor waved it off in the next session.

The third defense of his WBO crown was supposed to be a formality as a huge unification clash lay in wait, but unheralded southpaw Caparello landed a solid left that made Kovalev touch down in round one. The response was brutal — the Australian taking a knee after being sapped by a straight right to the body and Kovalev dumped him down twice more in the neutral corner to bring an early close.

Hopkins defied age and most sane conceptions of normality when he dominated Beibut Shumenov to unify the WBA and IBF light heavyweight titles at the age of 49. That set up a meeting with Kovalev for three of the four major titles and the younger, more powerful man ensured the all-time great finally ran out of road. Kovalev dropped Hopkins heavily with a right hook in the opener and proceeded to win every round on all three scorecards.

Kovalev’s reputation as a fearsome puncher, one backed up by a considerable weight of evidence by this stage of his career, contributed to plenty of one-sided beatdowns. More of the same looked to be in the cards in round three of his initial meeting with Pascal, who was repeatedly staggered and knocked halfway through the ropes in the third.

The Canadian roared back, thrillingly fighting fire with fire and putting Kovalev on the retreat, only for the champion to grind him down with straight, hurtful shots. A pair of withering right hooks resulted in a stoppage, although Pascal did enough to earn the dubious consolation of a rematch, staged the following year.

Andre Ward handed Kovalev the first defeat of his career before stopping him in the rematch, crushing an aura in the process. A further loss to Eleider Alvarez appeared to spell the end, although a switch of trainer to Buddy McGirt proved inspired. Kovalev went back to basics and boxed off his imperious jab to win a wide decision in the return.