Ruiz versus Joshua 2: ‘Clash on the Dunes’ retro cover pays homage to ‘The Rumble in the Jungle’ 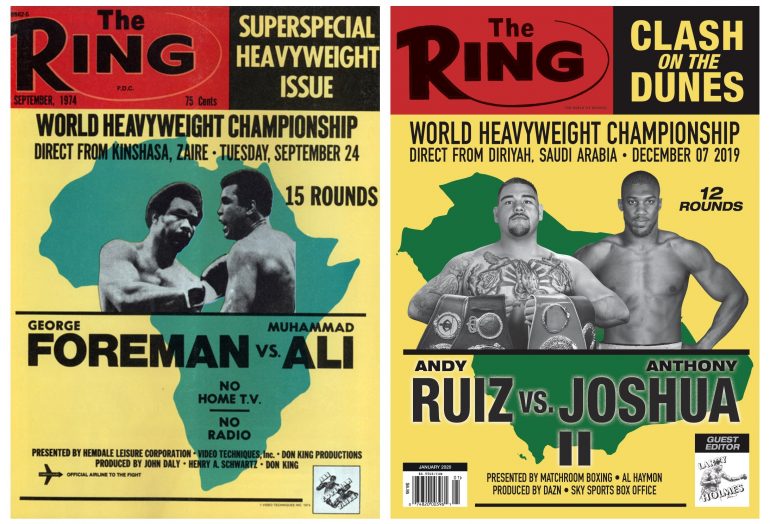 Today marks the 45th anniversary of “The Rumble in the Jungle”, the legendary heavyweight championship showdown between Muhammad Ali and George Foreman, which took place in Kinshasa, Zaire on October 30, 1974.

Over the decades, The Ring has paid homage to what is arguably the most famous fight in boxing history by speaking to the participants or gathering anecdotes from those who were there. This time, we take a more unique approach.

On December 7, 2019, unified IBF, WBA and WBO heavyweight titleholder Andy Ruiz Jr. will face off against Anthony Joshua, the man he sensationally upset in seven rounds at Madison Square Garden on June 1.

As with “The Rumble in the Jungle”, Ruiz-Joshua 2 will take place far from the boxing meccas of Las Vegas, New York or Atlantic City. Ruiz will not enjoy home advantage in Mexico. Joshua will not have the backing of 90,000 supporters at Wembley Stadium in London. “Clash on the Dunes” will take place in Diriyah, Saudi Arabia.

An enormously controversial locale. A global event that is eagerly anticipated the world over. A bout that could conceivably change the course of the heavyweight division for years to come. “Clash on the Dunes” has the same feel as those colossal heavyweight superfights that made the world stop in the 1970s, and The Ring will replicate our iconic “Rumble in the Jungle” cover ahead of this event.

The original concept for the Ruiz-Joshua 2 cover design was to include the colors of the Saudi Arabian flag (green and white) but this was too much a departure from its predecessor. The Foreman-Ali design from 1974 adopted colors from the now defunct Zairian flag (yellow, green and red) and we elected to retain those.

Here’s what fans can expect from this spectacular heavyweight issue that is due out on digital before its subsequent print release:

The Ring will also run a special subscription offer to coincide with our digital release, so keep your eyes peeled.

Ruiz-Joshua 2 will be televised live by DAZN in the U.S. and Sky Sports Box Office in the U.K.