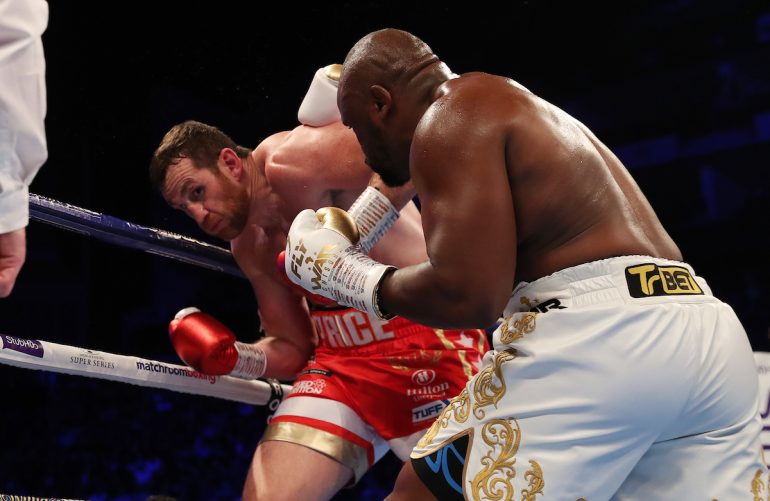 LONDON – This one was never going the distance.

In an all-British heavyweight collision, London’s Derek Chisora scored a convincing fourth-round stoppage over David Price at the O2 Arena on Saturday. The official time was 2:00.

Chisora, a former British, Commonwealth and European champion, hurt Price badly on the inside in the fourth and the colossal Liverpool fighter tumbled to the canvas. He rose bravely but his corner wisely threw in the towel when their man used the ropes to hold himself up.

“I came to seek and destroy,” said Chisora in an interview with Sky Sports in the U.K. “I knew if I caught him it would be over.”

Perhaps anticipating that Price would wilt under the pressure, Chisora, a notoriously slow starter, opened fast. The Liverpool man got the worst of most of the exchanges, but he did counter punch well and his vaunted power made him a consistent threat.

After two rounds, however, Price was breathing heavily and Chisora was already too close for comfort. Huge shots landed from both sides at the end of the third and the action continued after the bell. Already exhausted, Price returned to his corner with no sand left in the hourglass.

The writing was on the wall and Chisora closed well.

The 35-year-old Chisora has always been able to reinvent himself and his perseverance is to be admired. A brutal knockout loss to domestic foe Dillian Whyte in December could have been the end of the road, but the former world title is now back in line for another big fight.

Price accepted this assignment at just over three weeks’ notice when Chisora’s original opponent Joseph Parker, the former WBO heavyweight titleholder, was forced to pull out due to illness resulting from a spider bite that occurred in his native New Zealand.

The Parker-Chisora bout can hopefully be repackaged for early 2020.