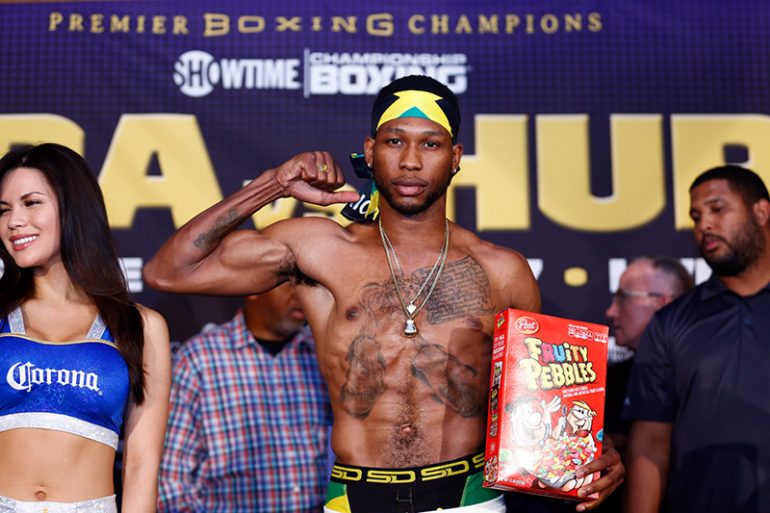 Nathaniel Gallimore says he finds inspiration in Ed Brown, his former training partner who was gunned down in 2016. Photo / Stephanie Trapp-SHOWTIME
26
Oct
by Francisco Salazar

Nathaniel Gallimore is confident he has the tools to pull off an upset victory when he faces junior middleweight contender Erickson Lubin at the Santander Arena in Reading, Pennsylvania. The 12-round fight will air tonight, live on Showtime (9 p.m. ET/ 6 p.m. PT).

Gallimore has suffered a rough stretch of late, losing two of his last three fights. Both losses took place in 2018, losing by majority decision to Julian Williams and by unanimous decision to Patrick Teixeira. In his last bout on Aug. 4, his first fight in almost a year, Gallimore defeated little known Antonio Todd by split-decision.

The 31-year-old attributed the rough stretch to the change in management and trainers, but believes he is a more effective fighter.

“I’m a completely different fighter now compared to a year and a half ago,” Gallimore told The Ring Thursday morning. “I’m a free agent now. I parted ways with my manager (Andrew Zak) and then I was in between trainers, which is why I didn’t get a fight. I had to mesh everything together. Now I have a trainer in John Pullman.”

“I had to deal with a lot of personal things last year. That’s no excuse though (for the losses), but I’m a better man now than what I used to be.”

Gallimore is currently not ranked by any of the sanctioning bodies, but still considers himself to be a contender in a very competitive and talented junior middleweight division. On paper, a victory over Lubin, who is ranked No. 9 by The Ring, would be an upset that would put Gallimore back into world title contention.

Gallimore is motivated, but more so by the memory of Ed Brown, an undefeated fighter who was shot dead while sitting in a car in a Chicago neighborhood back in December of 2016. Having trained alongside and later becoming friends with Brown, Gallimore hopes he can carry on Brown’s legacy throughout his triumphs.

“Ed was 24 years old when he died and it was a senseless act,” said Gallimore. “I miss him a lot, but I continue to carry his name on my trunks. I’m motivated to carry his name and work hard to succeed. I believe if I success, he succeeds too.

Gallimore attributes his mental toughness to his upbringing in Jamaica and the streets of Chicago, where he has lived since the age of 11. After picking up the sport during his early teens, Gallimore had modest success as an amateur before turning pro at the age of 26.

He does have victories over Jeison Rosario and Justin DeLoach, fights in which he struggled early, but was able to win by knockout. Gallimore believes he can persevere and come out victorious Saturday night.

“I had a very difficult upbringing in Jamaica. My family was poor and I came from a large family, but we were able to persevere. Chicago is my home and I was able to overcome obstacles and make a better like for myself. I’m still trying to do so today. I believe what I went through in my youth gives me an advantage in boxing.”

Gallimore will face an uphill battle when he faces Lubin Saturday night. He will be the underdog, but is confident he can defeat the southpaw fighter.

“I took the long way, but I’m finally here. I missed the big lights, but I believe I have the experience to really do damage. My time is now. I will show it on Saturday night.”

“It will be legendary.”