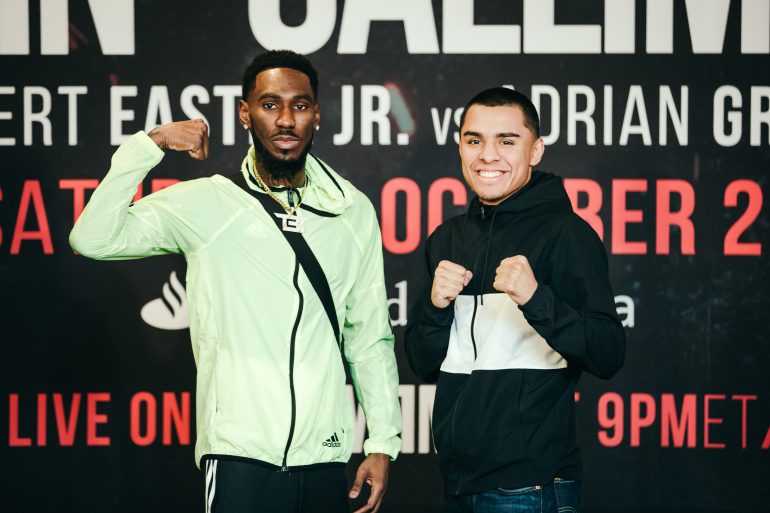 Robert Easter Jr. is keeping his focus on the present. The past, as the former IBF lightweight beltholder stresses, is in the past. Easter (21-1-1, 14 knockouts) wants to keep it that way, as he embarks on a new journey as a 140-pounder, after years of squeezing a 5-foot-11 frame into a 135-pound package.

Easter hasn’t won a fight in 21 months and six days, before he takes on Adrian “El Tigre” Granados (20-7-2, 14 KOs) in a 10-round super lightweight co-feature attraction on the undercard of the Erickson Lubin-Nathaniel Gallimore super welterweight bout this Saturday on Showtime Boxing: Special Edition (9 p.m. ET/6 p.m. PT) from the Santander Arena in Reading, Pa.

“I have a game plan and I’m going to stick to it,” Easter said. “My team is still the same. My father, Robert Easter Sr., is still my trainer. We’ve been through some stages and going back to the drawing board to see where adjustments had to be made.

Easter, 28, also stresses that there will be a lot of flash and power.

He says his past fights don’t play on his mind.

In July 2018, Easter Jr. lost the IBF lightweight belt to Mikey Garcia by unanimous decision. Easter Jr.’s next fight, against Rances Barthelemy, ended in a split-decision draw. Easter’s last victory came against Javier Fortuna, who came in overweight, in his third title defense on January 20, 2018, which resulted in a split-decision victory.

“I can’t change the past,” Easter said. “It’s why I keep saying my focus on this fight and what’s ahead. I feel better and I can only learn from it.”

Granados has some history that he would like to escape from, too. He is coming off a seventh-round TKO to Danny Garcia in April.

“This is a really good fight and I’m happy that Robert Easter took this fight,” Granados said. “Our styles are going to mesh well and there’s definitely going to be some fireworks. I have a statement to make. I’m going to re-establish myself and I’m more than ready to do just that. It’s going to be a great night on Saturday.

“It’s no secret that I made my name making a statement at 140. After that statement I never got an opportunity in that division. I was fortunate to share the ring with some of the best in the sport at welterweight, but I’ve always wanted to make a strong charge at becoming a champion at super lightweight.

“I know that Robert has a lot of talent and is a former champion for a reason. I’m coming in with a new slate, a new plan and I’m going to be ready for anything.

“Some people may see me as a stepping-stone and that’s okay. I want people to write me off. I know that people say my back is against the wall. But if it is against the wall, I’m going to come out swinging and give it all I’ve got.

“You can definitely expect fireworks and the Adrian Granados that the boxing world knows. It’s going to be a great fight and may the best man win. I’m more than ready to take home victory.”