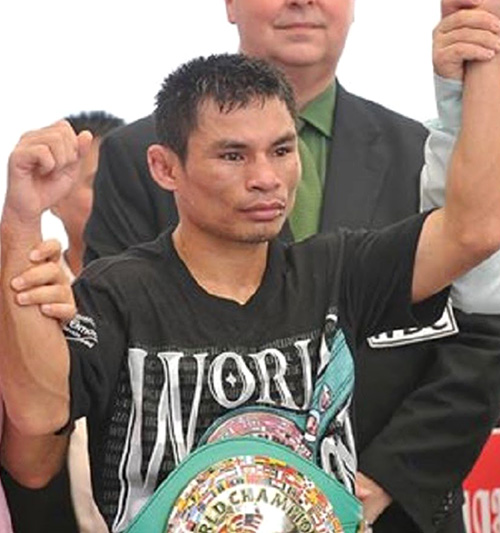 Wanheng Menayothin ran his record to an unbeaten 54-0, with 18 of those wins by knockout, with a dominant victory over Simpiwe Konkco on Friday at City Hall Ground in Chonburi, Thailand.

Despite his inauspicious record, Konkco (19-6, 7 KOs), the South African had a respectable track record, giving countryman Hekkie Budler a solid fight in a 2015 losing effort, and defeated Siyabonga Siyo and Nkosinathi Joyi in an unbeaten streak that stretches to 2016.

After a slow opening round, Menayothin began imposing himself in the second, using combinations to open up right hands and left hooks which pushed Konkco back. His aggression picked up further in the third when he let go with a seven punch combo highlighted by uppercuts.

Konkco began to get the fight he wanted in the fifth as he used his jab to back Menayothin up and landed punches from distance. Konkco landed a clean left hook counter as Menayothin came forward with his right hand.

Menayothin scored the fight’s only knockdown in the seventh, or rather, immediately after the seventh, when he let go with a right hand that coincided with the bell, and Konkco, who was in the process of diving in with his own right, was knocked to his knees.

Konkco had not fully recovered by the beginning of the eighth as an uppercut once again buckled his knees, but he was able to rebound with a few counter punches to earn some respect from his opponent. After eight, Konkco had won just a single round on two of the cards, according to open scoring, and needed a knockout to win. Though he earned a bit more consideration on the final cards, Konkco was never close to scoring that much needed finish.

Golden Boy Promotions announced in July that Menayothin had signed with their promotional company. An email seeking comment on what comes next for the unbeaten Thai was not immediately responded to.