Angel Ruiz takes a step up in class against Javier Flores, Thompson Boxing has high hopes 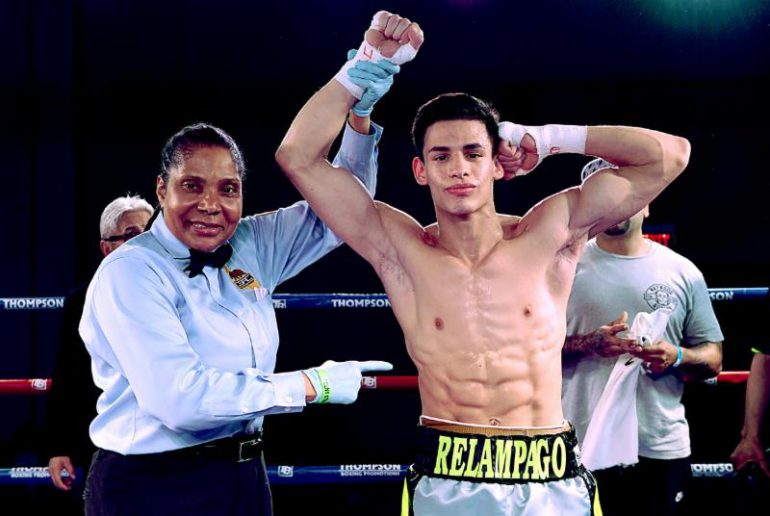 Welterweight prospect Angel Ruiz has passed the eye-test thus far with his power and aggression, but he will now face his toughest test to date as a pro.

The unbeaten Ruiz will square off against Javier Flores of Puerto Rico at the Doubletree Hotel in Ontario, California on Friday. The eight-round bout will stream live on ThompsonBoxing.com and the Thompson Boxing Facebook page (11:00 p.m. ET/ 8:00 p.m. PT).

Ruiz (16-0, 12 knockouts), who resides in Tijuana, has obliterated his opposition of late, knocking out his last five opponents, four of them within the first two rounds. In his last bout on June 14, Ruiz knocked out gatekeeper Miguel Zamudio inside the opening three minutes.

The 22-year-old southpaw has made an impression on Alex Camponovo, the general manager and matchmaker for Thompson Boxing Promotions.

“Angel is a diamond in the rough,” Camponovo told The Ring on Thursday afternoon. “He has raw power and tremendous speed. We have high hopes to see him become a prospect and take him to a world title. He will be tested this Friday against a strong Puerto Rican in Javier Flores. This truly is an explosive main event.”

Flores (14-2, 12 KOs) dropped a unanimous decision to Ronald Cruz in his last bout on April 6. His only other defeat came at the hands of Jaime Herrera, also on a unanimous decision, in November 2015. Overall, however, the 33-year-old Flores has faced the better opposition.

In the co-feature, unbeaten lightweight Golden Garcia will make his U.S. debut against Hector Garcia in a six-round bout.

Golden Garcia (11-0-1, 6 KOs), who resides in Montreal, Canada, stopped Mexico’s Adalberto Borquez in his last bout on Mar. 24 of last year. He has won his last three bouts since a draw against Jorge Luis Melendez in April 2017.

The 31-year-old is promoted by Banner Promotions and is co-trained by Otis and Howard Grant.

Hector Garcia (14-7-2, 8 KOs) defeated Ivan Chavela by unanimous decision in his last bout on Mar. 30. The Tijuana resident has won three of his last four bouts.