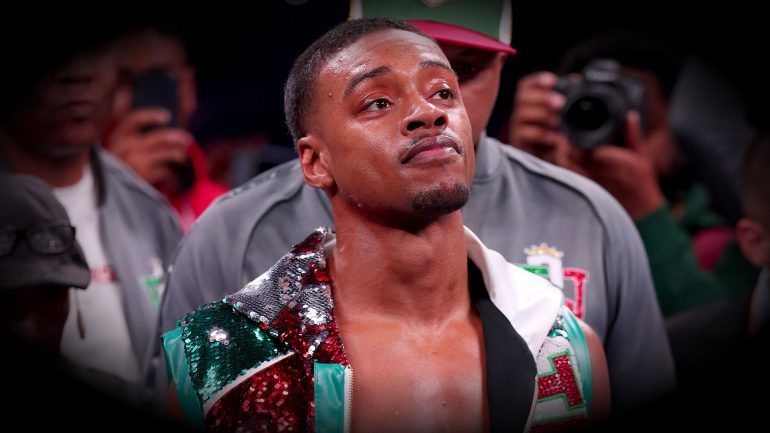 Fate shined kindly upon Errol Spence Jr. when he rolled his Ferrari, was ejected from the vehicle after a late night out, and managed to escape with not a singe broken bone last week.

The fighter, age 29, could possibly have to pay the piper. According to Dallas Police Department, Spence will face a charge for driving while intoxicated, a Class B misdemeanor in Texas, but won’t face additional charges because there were no other cars involved.

“As for getting a speed of the vehicle, we will not be getting one. It was a single car accident with no other criminal charges,” read the statement, which was provided to The Ring. 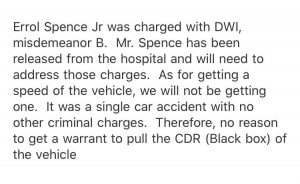 The Forth Worth Star-Telegram posted the news that Spence was discharged from Methodist Dallas Medical Center, and it seems he exited in a buoyant state.

In the first correspondence from the fighter since that accident occurred after midnight on October 10, the DeSoto, Texas-based welterweight with a 26-0 crowed on social media about his relative good fortune, writing “No broken bones I’m a savage!!”

There was some blowback, from fans who had been waiting patiently to hear from the fighter, and get more specificity about his health status. If one expected humbled grace, well, maybe that would come later.

Some people were puzzled, and fearing for the worst, when the information on the fighter stopped clod. No details, and no Spence; was the fighter maybe actually in worse condition than originally announced? The social media age encourages rampant and unfounded speculation, so this less-is-more level of sharing catalyzed a bit of chatter.

PBC, the Al Haymon-headed company under whose banner Spence operates sent out a short note not long after word spread.

It is probably too early to speculate on whether the boxer will fight again. But if his social media statement holds true, it seems a lock that the fighter will be able to defend his straps and seek further glory within the pugilism realm. Will he move into a more contemplative mode, and understand how lucky he was to dodge this speeding bullet he fired upon himself, some will wonder.