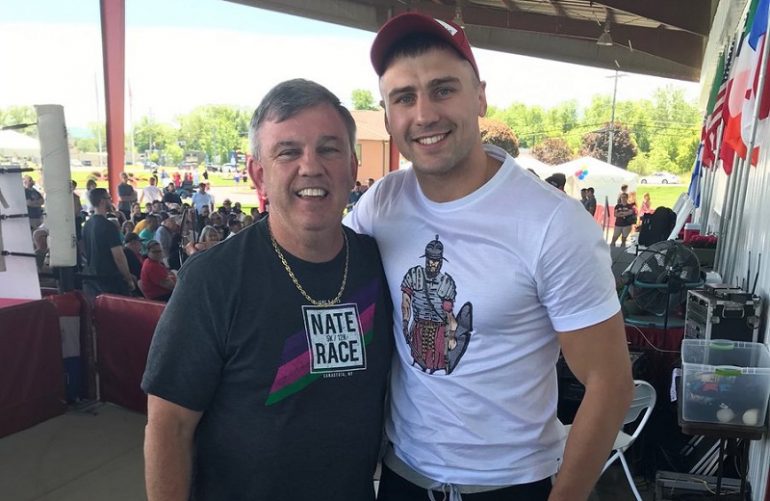 Teddy Atlas has been a world-class trainer for more than half of his life, learning his trade from the late, great Cus D’Amato. During their time together Atlas worked with a teenage Mike Tyson and the otherworldly gifted Wilfred Benitez.

Since then Atlas has worked with a cache of champions. His achievements were recognized by the International Boxing Hall of Fame when he was inducted.

Atlas was born on July 29, 1956, in Staten Island, New York. The son of a doctor grew up in a good home; however, as a youngster, he was never far from trouble and dropped out of school, eventually serving time at Rikers Island Penitentiary.

From his mid-teens, he enjoyed boxing and was invited to the Catskill Mountains by his friend Kevin Rooney to work under D’Amato. During this time Atlas won 1976 Adirondack Golden Gloves title. However persistent back problems forced him to hang up the gloves.

That wasn’t the end though; Atlas began working as a trainer under D’Amato’s supervision.

“I was fortunate to work with a few special fighters over the years,” Atlas told The Ring. “Not that I deserved it, I was 21 years old and I was with a great man, the great Cus D’Amato. He was my mentor and because I was with him, he got sent a fighter named Wilfred Benitez. You could call him a protege.

“The youngest fighter to ever win a world title. that record will never be eclipsed. When you think about the enormity of it, it’s mind-boggling. He won a world title when he was 17 years old. What do kids do at 17? They’re not winning world titles against great fighters like Antonio Cervantes.”

Atlas continued, “Wilfred Benitez was brought to Cus and he gave him to me to train for the Carlos Palomino fight when he won the welterweight world title. When I trained Benitez, it was because I was with Cus and he had confidence in me.

“(Benitez) was definitely the most complete package and most gifted guy I had worked with but it had been developed. As far as most pure, God-given talent, raw, from the earliest stage that you saw, it would have to be a 12-year-old Tyson, who was 190 pounds but no fat. He had to impress me and Cus; he had to box his first day with a 27-year-old man who was a professional fighter and he was able to do that.”

The gregarious character is famed for delivering empowered speeches midway through fights.

Atlas, now 63, lives in Staten Island with his wife Elaine and their two children. He founded the Dr. Theodore Atlas Foundation in honor of his father in 1997 http://dratlasfoundation.com/. He worked as a color commentator for ESPN for 21 years. During that time, he won the prestigious Sam Taub Award for excellence in his field. In 2006, he published his autobiography “Atlas: From the Streets to the Ring: A Son’s Struggle to Become a Man.”

He graciously took time to speak to The Ring about the best he’s trained in 10 key categories.

BEST JAB
MICHAEL MOORER: First of all, he was coming from the wrong direction, the southpaw direction, which has less people prepared to deal with that direction, especially heavyweights, back then, 25 years ago. It was coming from the lefty position and it was very accurate and was hard. He didn’t always use it enough but it won him a title from (Evander) Holyfield, so that’s enough from me. You win a title against Holyfield, primarily because of your jab, guess what? I’m gonna say you have a pretty good jab.

BEST FOOTWORK
OLEKSANDR GVOZDYK: His legs allowed him to basically keep a tremendous puncher like (Adonis) Stevenson off balance all night long, allowed him to win the light heavyweight title in the first fight we were (in) together. His ability to keep out of danger, Stevenson, a southpaw, is one of the greatest punchers I’ve ever seen. To be able to follow that very definitive fight plan, mentally shows you where (Gvozdyk) was, to keep that type of concentration, in that kind of environment, that should be applauded. He had to keep angles and never stay in one place too long and he was able to execute that and his legs were a big part of him becoming the light heavyweight champion of the world.

BEST HAND SPEED
TIM BRADLEY: I’m going to say Timothy Bradley. I don’t know if people realized how fast his hands were; they were very fast. Benitez had fast hands but his greatest strength but his ability to land clean and accurately because his defense put him in that position. He may have given you the perception that his hands were faster because he was so clever and ghost-like. When it came down to really calculating speed, you have to have something to gauge it against, so if you gauge it against one of the fastest hands maybe in the history of the sport, a guy named Manny Pacquiao, and you had an opportunity to gauge Bradley’s handspeed against somebody of that level of speed then you can get a better feel and he was very close and that’s pretty damn good if you can be close in that company with the speed of a Pacquiao. For me I have to have something grounded to base things on, something that’s relative and that’s pretty real to see that his hands matched up close to Pacquiao’s.

SMARTEST
GVOZDYK: I’m gonna say Gvozdyk is maybe the smartest fighter I’ve worked with in such a short period of time to make such an immense statement. I understand some people may say it’s ’cause I’m with him now but trust me; I try to care about the accuracy of things I say. Gvozdyk in that way but if you’re talking an in-ring I.Q. and an innate intelligence, I have to say Benitez. That guy started when he was six years old. God-given talent but also what allows that God-given talent to be used to the level it’s used and the way it’s used. That’s developed by great instincts, great experience, teaching and also an innate instinct.

STRONGEST
KALLIE KNOETZE: He was a South African cop; he was like a rugby player. He had that physique, natural strength, not from weights, just big-boned. You can feel his bulk. He’s grounded into the floor when you push against him. He was a strong mass because of where he came from and his genetics. Knoetze was a man. Tyson was 12. Tyson was extremely strong. (Knoetze) had man strength, like a piece of concrete sitting on the floor that was hard to move.

BEST CHIN
TYSON: Tyson had a tremendous chin and he had a helluva neck for shock absorbers. His neck was close to 20 inches. If you trace his career, he didn’t disappear straight away. He took those shots. What wasn’t strong was his will; that’s what cracked. His will cracked before his chin. He absorbed those punches and he took big punches before he got knocked out. He showed a chin to handle those punches at a very high level. His will wasn’t nearly as strong as his chin.

BEST PUNCHER
TYSON: That’s pretty easy. Anyone who could be knocking out men when he’s 12, 13 years old is a pretty damn good puncher. He learned the technique to make you miss and catch you clean but power’s power and punchers are born not made. Tyson’s maybe one of the best punchers in history. When you’re developing a guy who’s 12 years old and you can’t put him in with kids to spar because there are none and so you’re hiring sparring partners and they’re men and he’s hurting them and knocking them out.

BEST BOXING SKILLS
BENITEZ: It’s got to be Benitez. Boxing is about hitting and not getting hit, Benitez was doing it at the highest level since he was 17 and when beat Cervantes. Benitez was the guy.

BEST OVERALL
BENITEZ: Sometimes you go to the Academy Awards and one movie wins all the awards. What are you gonna do? That would be Benitez. Anyone who could beat Roberto Duran, amongst many other great fighters, that’s a pretty good resume. I would say Benitez overall was the package. He was a special fighter.