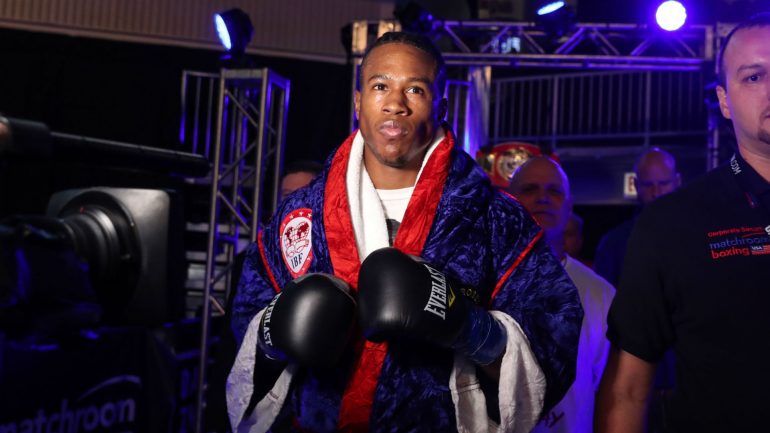 Patrick Day is in a coma right now, and the boxing world has been feeling low since word dropped Saturday night that the boxer lost consciousness after being kayoed in round ten of a junior middleweight contest against Charles Conwell.

Promoter Lou DiBella, who handles Day (17-4-1, 6 knockout), sent out a release which updated the pugilism world of the condition of the 27-year-old fighter, who was knocked down twice against the 2016 Olympian Conwell, a Ohio native.

“Patrick Day suffered a traumatic brain injury during his bout on Saturday night. He was rushed to Northwestern Memorial hospital where he underwent emergency surgery. As of Sunday evening, Patrick is in a coma caused by the injury and is in extremely critical condition. On behalf of Patrick’s team, we appreciate the outpouring of support, prayers, and offers of assistance from all corners of the boxing community.

Updates will be provided as circumstances change. In the meantime, we ask that the privacy of Patrick and his family be respected during this difficult time.”

Conwell, a 21-year-old fighter with an 11-0 (8 knockouts) record, bravely spoke on his emotions after the fight.

“Feeling very down, praying as we speak,” the boxer admitted. “Pray for Patrick Day, keep him in your prayers, so he can make it back to his family safe!”

On Sunday night, after 11 p.m. ET, Conwell said he was feeling hopeful and upbeat that Day, a 2012 Olympic alternate from Freeport, Long Island, N.Y., could come out of this. “I’ve been up all night praying,” he shared.

Not my business, but I told him, implored him, to talk to friends, a pastor, share his feelings, because bottling them in would not be good. He is doing that, he said.

NOTE: People are debating, some of them, whether this fight should have been stopped. I don’t know. But I will say, after the second knockdown, in round 8, Patrick popped up and his eyes looked clear and his legs looked OK. And he came out for round ten with decent energy, I thought. The fight is not available on replay on the DAZN app, as of now, however.

I do get the sense that being we’ve one too many instances of ring fatalities recently, that maybe enough folks are stricken by the sadness to maybe mobilize and at least TALK more about how we can better minimize risk.