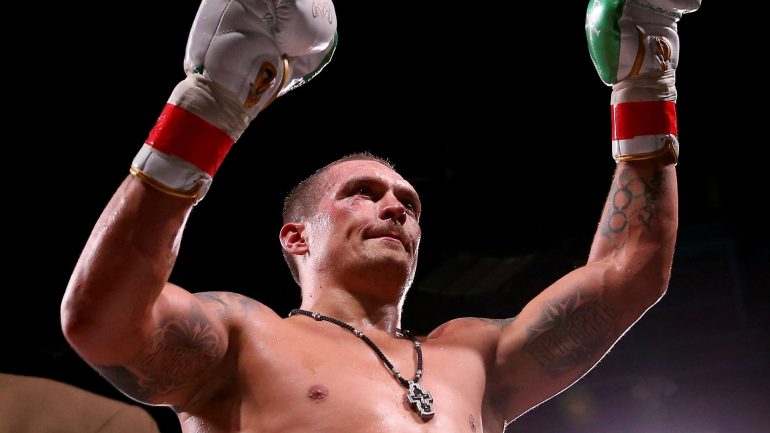 Oleksandr Usyk has some thoughts on facing the winner of Anthony Ruiz Jr. and Anthony Joshua’s world heavyweight title rematch.

The former undisputed cruiserweight king made his long-awaited debut in boxing’s blue-riband division on Saturday, claiming a comfortable win over late replacement Chazz Witherspoon in Chicago – the veteran American pulled out by his corner at the end of round seven.

And Usyk is in a hurry for a shot at becoming a two-weight world champion.

“It’s not a question for me, it’s a question for Eddie [Hearn, his promoter], whatever he can bring to me,” Usyk told a post-fight news conference when asked who he wants to fight next.

“But if it were up to me, I probably will pick up the winner of Joshua–Ruiz.”

Asked which of the two he would prefer to box, Usyk replied: “I think Joshua.”

Joshua – like Usyk a London 2012 Olympic gold medalist – lost his IBF, WBA and WBO titles to Ruiz in a stunning upset defeat earlier this year, with the pair set to square off again in Saudi Arabia in December.

Usyk has been installed as the mandatory challenger for the WBO belt and has no doubts over his capabilities despite limited exposure against the big men.

“I will be getting ready [for the winner of Ruiz v Joshua]. Now I am ready,” he told iFL TV.

Hearn is confident he will deliver a title shot for Usyk next, while acknowledging that fight could be for the vacant WBO belt if the Ruiz-Joshua winner chooses to go down a route other than taking on the mercurial Ukrainian.

“You’ve got to understand, Usyk’s next fight is for the heavyweight title,” Hearn said to iFL TV.

“It’s dangerous for everybody, but isn’t that what you want? He won’t not let it happen.

“He will fight for the world heavyweight title next, I don’t know who that’s against but he’s in that position.

WBC champion Deontay Wilder, who is preparing for his own rematch against Luis Ortiz at the end of next month before another proposed return contest with Tyson Fury, dismissed Usyk as being “too small” to make an impression on the heavyweight division.

“Bring Wilder here,” Usyk added. “I will fight him here [in the United States], no problem. He would never come to Ukraine.”