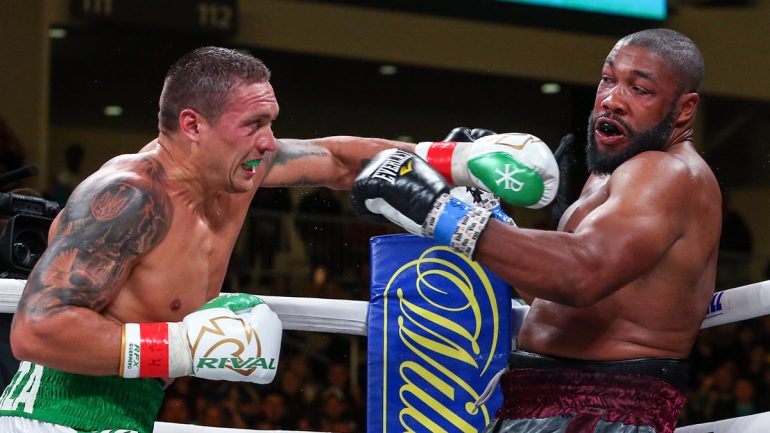 CHICAGO – Welcome to the heavyweight division Aleksandr Usyk. The former amateur standout improved to 17-0 (13 KOs) as a pro with a seventh-round stoppage victory over Chazz Witherspoon tonight.

Usyk-Witherspoon was streamed live on DAZN from the Wintrust Arena.

The Ukrainian fans in attendance chanted “Usyk-Usyk” as the former undisputed cruiserweight champion of the world walked to the ring. There were tons of flags waving in the stands and the fans erupted when Michael Buffer announced Usyk’s name.

The first round was technical, as both men attempted to establish their jab, Usyk from the southpaw stance and Witherspoon orthodox. The Ukrainian began to find his range more in the second round, scoring with straight left hands upstairs and to the body. By the third round Usyk was landing 1-2’s straight through the guard that got Witherspoon’s attention. He battered him in the fourth with combinations from every angle.

The Philadelphia native never stopped trying, but Usyk’s footwork and hand speed were on another stratosphere. It was target practice in the fifth and sixth round, as Usyk punished Witherspoon to the head and body, swelling both of his eyes. The seventh round could’ve been scored 10-8, as Witherspoon took an absolute shellacking on the ropes. He made it out of the round and back to his corner, but his corner had seen enough and retired before the start of the eighth.

Witherspoon did get some licks in, as Usyk sported a mouse under his right eye. But this was a completely one-sided bout that honestly could have been stopped a round or two earlier. Usyk was returning from nearly a year-long layoff, the longest of his career, and appeared to want to get some rounds in tonight. After fighting on the road in front of hostile crowds for the last year or so, Chicago must have felt like a home away from for him tonight. The Ukrainian fans made the Wintrust Arena feel like little Kiev. “I love all of these people and I am fighting for them,” he said.

CompuBox stats were scary. Usyk landed 139 of the 347 punches he threw (40%), including an insane 70% of his power punches (86 of 123). Witherspoon landed just 21 of 208 punches (10%) in the entire fight. It is worth noting that although Usyk was able to land at will, he could not drop Witherspoon. Questions will remain is the former cruiserweight will have the power to get it done at the elite level at heavyweight.

Aleksandr Usyk is WBO mandatory at heavyweight, which is one of the titles on the line for the Ruiz-Joshua2 fight in Saudi Arabia on December 7. When asked if he is ready for Anthony Joshua, Andy Ruiz or Deontay Wilder, Usyk said, “I am ready, I am ready to fight whoever.”