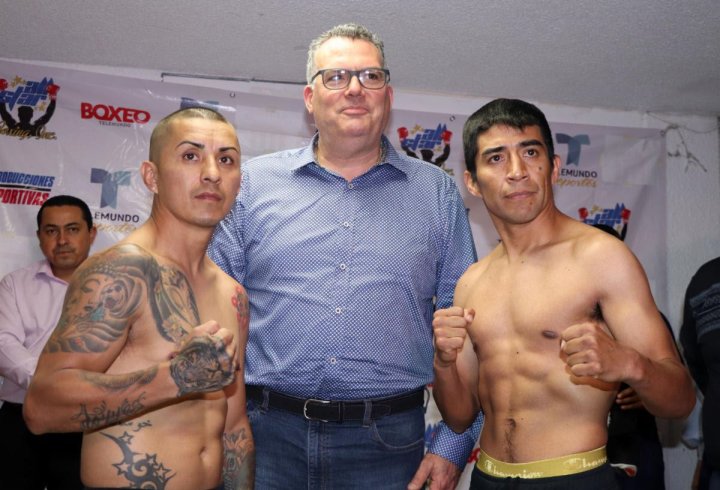 Ganigan Lopez’s pursuit of a world title in another weight class was surprisingly thwarted by a familiar foe late Friday night.

In a shocking upset, Lopez was stopped by veteran Armando Torres in the opening round at the Auditorio Blackberry in Mexico City. With the victory, Torres improved to 25-18 (18 knockouts).

The 37-year-old Lopez has had previous success at 108 pounds, winning a world title that he would eventually lose to Ken Shiro in May 2018.

In March of this year, he attempted to get back on the world scene against then-WBO titleholder Angel “Tito” Acosta but was knocked out in eight rounds.

Subsequently, Lopez decided to move up to flyweight in order to challenge for another world title, and a win over Torres, whom he defeated in January 2011 by decision, would put him one step closer to that goal. Torres, however, was eager to even the score.

From the opening bell, Lopez was getting the better of the exchanges against his opponent, who switched stance intermittently. However, with less than a minute remaining, a right uppercut to the chin dropped Lopez against the ropes. He looked more surprised than hurt but moments later, Lopez was dropped again, this time by a sweeping left-right combination.

Bleeding from the nose, Lopez did beat the count, but referee Laurentino Ramirez waved the fight off at 2:51 and dismissed all protests.

Torres believed his hard work in the gym combined with Lopez’s overconfidence was what got him the win Friday night.

“To me, this was not a rematch. What happened in the past is the past,” said Torres, while holding his infant daughter during the post-fight interview. “I defeated him. He said he was going to defeat me, but I was confident I was going to defeat him tonight. We worked really hard in the gym for this fight. I’m going to keep working hard until I fulfill my goal of fighting and winning a world title.”

Flyweights Giovanni Garcia (5-2-2) and Sergio Mejia (3-3-1) fought to a majority-decision draw over eight rounds. One judge scored the bout 78-75 for Garcia, while the other two judges scored the bout 76-76.