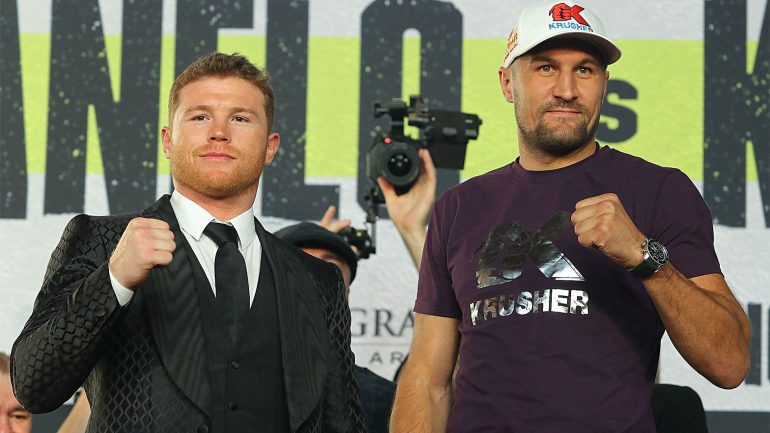 Canelo Alvarez is looking for more history in his history-making career when he takes on WBO light heavyweight beltholder Sergey “Krusher” Kovalev (34-3-1, 29 knockouts) on Saturday, Nov. 2 at the MGM Grand Garden Arena in Las Vegas, which will be streamed live exclusively on DAZN.

On Thursday, Alvarez addressed the media in a conference call, and the points he wanted to make was that he’s the one who choose Kovalev and he’s fighting at 175.

“I spoke with my team, and Eddy (Reynoso, Canelo’s trainer) more than anything, he wanted that fight, and wanted that fourth title,” Alvarez explained as to what the process was in taking on Kovalev. “Kovalev is one of the best fighters in that division, and (Reynoso) wanted to make history in boxing.

“I’ll be 175 pounds, that’s what I’ll be, God willing that’s what we’re working on,” he said. “I’m lifting more weights. I lifted previously, without that much weight. I’m eating more carbs, eating more protein. We’re sparring with fighters who are taller and stronger.”

Oscar De La Hoya, the Hall of Fame fighter who is the Chairman and CEO of Canelo’s promoter, Golden Boy Promotions, said this jump in weight shows Alvarez’s character and what he would like to accomplish in boxing. His goal, De La Hoya said, is to one day be considered “the best in the business.” De La Hoya also stated that a catchweight was never discussed and it was Alvarez who stressed the fight take place at a full 175.

“Moving up two divisions is a big challenge for me,” Alvarez said. “But I also think it’s the most important fight of my career. That’s why we’re doing this, making history.”

Asked for his response to detractors about moving up two divisions, Alvarez said, “The truth is, the critics who aren’t with me who are always going to talk about anything that I do, I have nothing to respond to them with. I don’t plan on making them happy, and I don’t hope to. We started to think about moving up after the (Danny) Jacobs fight.

“We know it’s a risk moving up two divisions, but we feel we have the tools to accomplish this. We’re focused 100-percent on this fight, and we’ll see what comes after.”

Back in 2013, Alvarez met Kovalev while Canelo was training for his fight against Floyd Mayweather. Canelo said the two got to know each other, when Krusher was fighting at the four- and six-round level and Team Alvarez liked Kovalev’s progress.

Alvarez said he’s not placing any limits on himself. His obvious focus is on the task in front of him on Nov. 2.

Asked whether he saw the Gennadiy Golovkin-Sergiy Derevyanchenko fight last Saturday, a bout in which many thought Derevyanchenko may have won, despite the tight, though unanimous scores in the favor of “GGG,” add Alvarez to the Derevyanchenko contingent.

Against Kovalev, going to the body will a key.

“Without a doubt,” Alvarez said. “(Body shots) are the most important punches for any fighter; not just in this fight, in all fights. Of course more so for this fighter, that’s a weak link that he has, so of course, we’re going to bang to the body.”