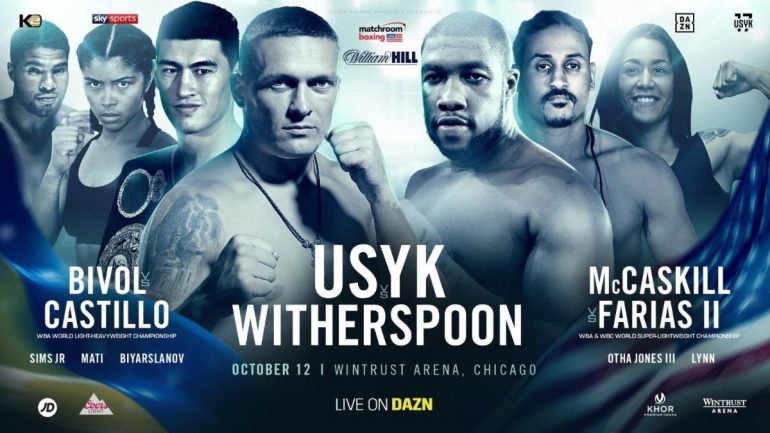 CHICAGO – Eddie Hearn’s Matchroom Boxing put on public workouts on Wednesday for Saturday’s fight card headlined by the heavyweight debut of Aleksandr Usyk. For Ukrainian-American fans in The Windy City, it was a chance to catch Usyk in person before the Olympic gold medalist and former undisputed cruiserweight champ from Ukraine displayed his celebrated skill and athleticism against heavyweight veteran Chazz Witherspoon.

Usyk-Witherspoon will be streamed live on DAZN from the Wintrust Arena and it’s undercard is stacked with talent, both youthful and experienced.

Before the main event fighters worked out, several undercard fighters got into the ring for both diehard fans and casual passersby at Chicago’s Pioneer Loop. “Chi-Town” native Summer Lynn, a two-time national amateur champion, kicked things off. She makes her pro debut in a four-round welterweight bout Saturday night.

Giovanni Mioletti (17-0, 7 KOs) and Joshuah Hernandez (9-2, 7 KOs), both fighting out of Chicago, were next. They will square off in a super featherweight bout scheduled for ten rounds. Super welterweights Charles Conwell (10-0, 7 KOs) and Patrick Day (17-3-1, 6 KOs) broke a sweat as well.

Next up was undefeated super middleweight prospect Anthony Sims Jr. (19-0, 17 KOs), a cousin of former pound-for-pound star Floyd Mayweather Jr. TJ Doheny (21-1, 15 KOs), the rugged southpaw who gave unified super bantamweight beltholder Daniel Roman all he could handle back in April, did his thing as well. Neither man’s opponent was present.

Unified super lightweight champion Jessica McCaskill (7-2, 3 KOs), the only reigning world titleholder from Chicago, worked out after her opponent, Argentina’s Erica Anabella Farias (26-3, 10 KOs), a former two-division champion herself. These two fought last October in an entertaining scrap that McCaskill won by unanimous decision. They know one another very well and should make for a memorable rematch.

WBA light heavyweight titleholder Dmitry Bivol (16-0, 11 KOs) entered the ring next. He stretched, did a little shadowboxing, then worked the mitts for a few minutes with trainer Gennady Mashianov. His opponent, Dominican Republic native Lenin Castillo (20-2-1, 15 KOs), was not present.

A good crowd had gathered by the time the main event fighters entered the ring. Philadelphia’s Witherspoon (38-3, 29 KOs), a last-minute replacement after it was reported that originally scheduled opponent Tyrone Spong had tested positive for PEDs Monday night, took his time getting loose. Although Witherspoon is experienced and naturally bigger than Usyk, he will be a massive underdog Saturday night.

About two hours after the beginning of the ceremonies, Usyk (16-0, 12 KOs) was finally up. A good crowd of Ukrainian-American fans mobbed him as he made his way to the ring. Usyk was all smiles as he shadowboxed, then he threw tee shirts and jerseys into the crowd. With nearly 50,000 Ukrainians in Chicago, the Usyk-Witherspoon card has been a hot seller in terms of tickets. Expect a good crowd Saturday night inside the Wintrust Arena.