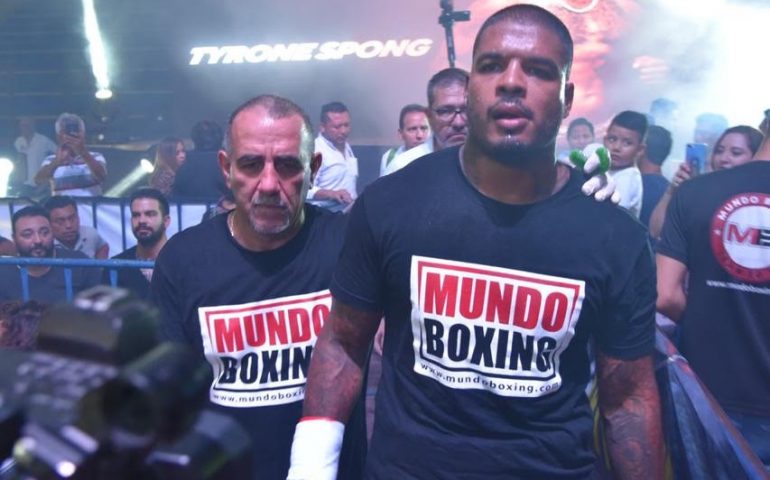 Fight week in Chicago isn’t off to the start that organizers would have hoped for.

The main event for this Saturday’s DAZN card was thrown into uncertainty when promoter Eddie Hearn announced Monday evening that Tyrone Spong had failed a test conducted by the Voluntary Anti-Doping Association ahead of his fight against Oleksandr Usyk.

“We have been contacted by VADA to inform us that there has been an adverse finding in Tyrone Spong’s test,” Hearn tweeted Monday. “It has been sent to the State of Illinois commission and further information will be released in the morning. We have reserve opponents standing by.”

The substance Spong had come up positive for was clomiphene, according to a report by Jake Donovan. An email to Matchroom Boxing seeking confirmation was not responded to by the time of this story’s publication. Clomiphene is an anti-estrogenic substance that is used to treat infertility in women, but can also be used to increase testosterone circulation, according to the U.S. National Library of Medicine. The United States Anti-Doping Agency website says that it’s not FDA approved for use by men and therapeutic-use exemptions for this substance are “unlikely to be granted to men.”

Just who those reserve opponents would be is not immediately clear. Of the fights listed on the card from the Wintrust Arena, only the Usyk-Spong fight is at heavyweight. An email to Usyk’s manager Egis Klimas was not responded to by the time of this story’s publication.

This is just the latest setback for the 32-year-old Usyk (16-0, 12 knockouts), who was stepping up to heavyweight after dominating cruiserweight and becoming undisputed champion. The southpaw Ukrainian had intended to return on May 25 against Carlos Takam, but suffered a torn bicep just beforehand and had to withdraw.

Spong (14-0, 13 knockouts), originally from Suriname but now fighting out of Florida, had been a kickboxing champion during a decade-plus long career and dabbled in MMA too before coming to boxing in 2015.

Having several backup opponents waiting may be a product of learned experience, who saw Jarrell “Big Baby” Miller have to withdraw from his fight against Anthony Joshua earlier this year after failing VADA tests for multiple substances. Heather Hardy, who recently fought Amanda Serrano in another fight on DAZN, also had an adverse finding for the diuretic Lasix afterwards.