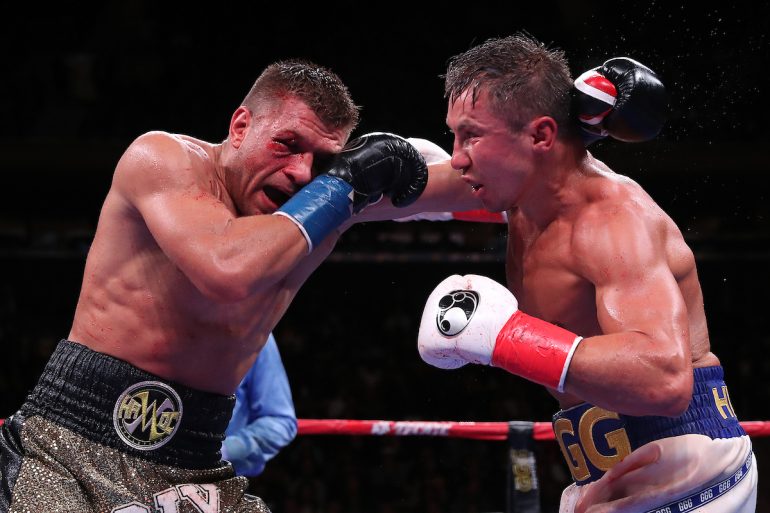 NEW YORK — It was a bigger drama show than even Gennadiy Golovkin could have expected.

Swollen around his cheeks and out of breath, Golovkin looked every one of his 37 years after the fifth round. A left hook to the body from Sergiy Derevyanchenko – hidden after a 1-2 combo upstairs – had Golovkin in greater peril than any could remember.

With time seemingly running out on his Hall of Fame career, Golovkin, the old boogeyman of the 160-pound division, posed a question to the relative upstart Sergiy Derevyanchenko: “How badly do you want to win?” Golovkin was willing to bet it wasn’t as badly as he did.

After twelve rounds of brutality, both men looked as if they didn’t have another punch left to throw. The scores finally dispelled the drama at Madison Square Garden: 114-113 on one card, and 115-112 on the other two, giving Golovkin the vacant IBF middleweight title in a brutal contest.

The seriousness of the battle was as apparent in numbers as it was on Golovkin’s face. Derevyanchenko landed more total (230 of 738) and power punches (183 of 472) than anyone had ever on Golovkin, even more than Canelo Alvarez (202) in Golovkin’s lone defeat, according to CompuBox. Golovkin landed 243 of 720 attempts, but was dwarfed in power connects (136 of 314).

Both fighters stated afterwards that they’d be open to a rematch.

The crowd, which appeared to be heavily partisan in favor of the Kazakh at the outset, booed Golovkin afterwards as the Ukrainian played to the crowd. Derevyanchenko’s promoter Lou DiBella was incensed as he stormed the ring nearest press row, stating vehemently that his fighter deserved the victory.

“Gennadiy’s legacy is determined…Tonight should have been Sergiy’s moment,” said DiBella. “I’m not gonna call it a robbery…but I will always believe I know who won.”

Neither fighter would attend a post-fight press conference, and would instead head to nearby Bellevue Hospital for a precautionary check-up. DiBella, who co-promoted all three Arturo Gatti-Micky Ward fights, said the manner in which they left, in one ambulance after the other, reminded him of those bouts.

There was no hint of just how long the night would be as Golovkin (40-1-1, 35 knockouts) started the fight quickly, dropping Derevyanchenko (13-2, 10 KOs) at the outset when an uppercut followed by two left hooks set up a right hand high on the head that put Derevyanchenko down. The 33-year-old Derevyanchenko didn’t appear too hurt, and just as he did two fights earlier, when he was dropped by Daniel Jacobs in the opening round of his only prior loss, he came back firing. 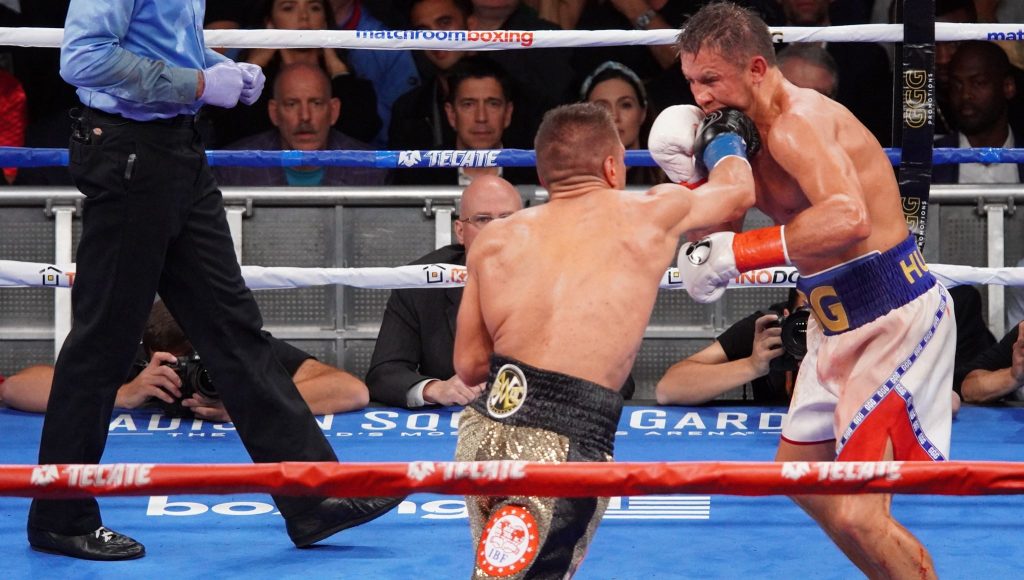 Derevyanchenko began landing his right hand with laser accuracy in the second, but Golovkin opened up a nasty cut above his right eye with a left hook that sliced his eyelid at an angle. The cut was ruled on the spot as a headbutt, though it was clear in replays that it was caused by a punch.

“The cut really changed the fight. I couldn’t see at times. And he was targeting the eye. But no excuses, it is what it is, I was trying my best,” said Derevyanchenko.

Derevyanchenko continued banging away, stunning Golovkin periodically and forcing him to back up. Michael Bazzel, a Swiss Army knife in a number of corners throughout the years, did as heroic a job as could be asked to keep the cut under control.

After a near disaster in the fifth, Golovkin came back and started firing away, trying to drain the will of the underdog. The crowd, which filled most of The Garden’s big room, chanted “Triple G!” to keep their fighter going. Derevyanchenko had sustained success with his right hook, rocking Golovkin as the fight took on the texture of the Marvin Hagler-John Mugabi fight of 1986.

Golovkin continued to target the right eye with his left hook, and Derevyanchenko defied logic by standing up to the punches. Doctors inspected the cut before the beginning of the eighth, but it was the baseball-sized welt under Golovkin’s eye that was emerging as a storyline.

Unwilling to let his second title opportunity pass without giving it everything, Derevyanchenko survived a devastating right uppercut to begin the ninth, and then had Golovkin backing up from a combination that appeared capable of cracking Golovkin’s chin.

As good as the fight was to this point, it went to another level in the tenth. It began with Golovkin nearly out on his feet, as an era in middleweight boxing looked set to wrap. It ended with Golovkin firing away at a bloodied, dazed Derevyanchenko along the ropes. Had Golovkin not interpreted referee Harvey Dock’s positioning as an attempt to stop the fight, he would have had another couple of songs to try for the finish.

Golovkin was the stronger of the two in the eleventh, but Derevyanchenko came back with one more determined rally in the twelfth.

Johnathon Banks, who was working his second straight fight as Golovkin’s trainer, wasn’t pleased overall with his fighter’s performance.

“I liked the fact that he kept rallying back, but I didn’t too much like his overall performance because that’s not what we were working on,” said Banks. “I just personally don’t like to see my guy get hit like that.”

With the win, Golovkin keeps his hopes – however faint – of securing a third fight with Alvarez to settle the dispute of their controversial two fights. The first one in 2017 ended in a draw, while Alvarez won the rematch by majority decision last year.

Tom Loeffler, who runs Golovkin’s GGG Promotions, said that WBO middleweight titleholder Demetrius Andrade, who was in attendance at the fight, was a “viable option,” as were Kamil Szeremeta (21-0, 5 KOs), the Polish fighter who knocked out Oscar Cortes in two on the undercard, and Japan’s Ryota Murata. And of course, there’s Alvarez, though Loeffler admitted he had no way to know how the Mexican star felt about a third fight after watching Golovkin’s latest outing.

“That’s really up to Canelo,” said Loeffler. “He’s got this fight with [Sergey] Kovalev coming up. That’s a question you can ask Canelo after the Kovalev fight.”

Golovkin, also knowing the score, kept the invitation open to Alvarez, as always.

“Everything is ready, just call Canelo,” said Golovkin. “If he says yes, let’s do it.”

Ryan Songalia is a member of the Boxing Writers Association of America and part of the Craig Newmark Graduate School of Journalism Class of 2020. He can be reached at ryansongalia[email protected]