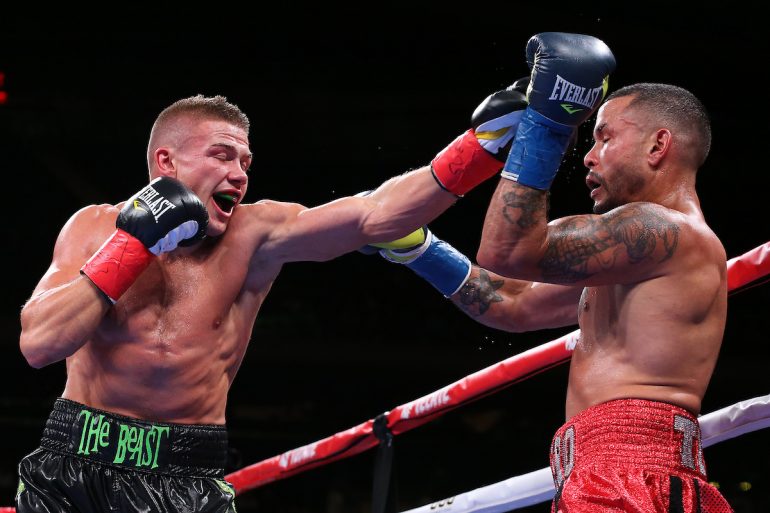 NEW YORK — Ivan Baranchyk came in to MSG in NYC off a loss, having dropped the IBF junior welterweight crown to Josh Taylor in his previous bout. He was seeking to get back on the sunny side against Gabriel Bracero, who is seeking to stay on that straight and narrow, and be a fully productive member of society.

Bracero hung tough, he showed his chin is of a pretty good grade, but Baranchyk came to the ring looking strong and determined to wreak havoc on his foe. He succeeded, in round four, when a left hook to the body sapped some soul from Bracero, and then a right hand buzzed him. He went to the mat, and his corner stepped up to pull the plug.

The Sunset Park, Brooklyn native Bracero, age 38, finished an incarceration stint this summer, and had been training boxing on work release. The Russian born Baranchyk, promoted by Lou DiBella and promoted by Split T, was able in round one to send Bracero to the mat, but off a push. Bracero was boxing smart, moving a lot, and down went Baranchyk, off a push.

To the second, we saw Ivan edge forward, sting Gabe with a left hook. He answered with a single leg takedown. Bracero scored with a conuter right, the crowd dug it. The hooks were clanging on Bracero but his chin held up. Baranchyk looked strong to this point, and we saw a slice on the loser’s left eye.

To the third; that left hook, Baranchyk craved landing it. The right landed as Bracero was on the ropes but he handled it and spun out. They traded after the bell, after Gabe landed a counter or two that impressed the crowd. In the fourth, Gabe was again smacked with back to the ropes, but again, his chin held up. Ref Artie Mercante warned Gabe hard, then the resumed fighting. Down went Bracero, and his corner hopped up. His left eye was bleeding. A left to the body, filthy, and a crisp right hand, Bracero was buzzed. The corner then saved him from himself, in their minds.

The end came at 1:30 of the fourth, a TKO was called, and the WBA intercontinental 140 pound belt was Baranchyk’s.

Bracero looked up at the screen watching the replay, to see how it went down. He watched the finale, and off to the dressing room he went, contemplative.

Ali Akhmedov tangled with Andrew Hernandez with a WBC minor belt at stake. For a short spell, anyway…

In the first, the athlete from Kazahkstan scored a knockdown off a right. Hernandez got up, but on Johnny Walker legs, and referee Eddie Claudio waved it off. The right hand landed on the left side of the skull, as the loser dipped down to his right. It was a clean opening and the winner took it. 44 seconds in, and the richly proportioned lady sang the sang, game over.

The fighter from Phoenix, coming in 1-0-1 (1 NC) in his last three, protested but he was not on solid ground there.