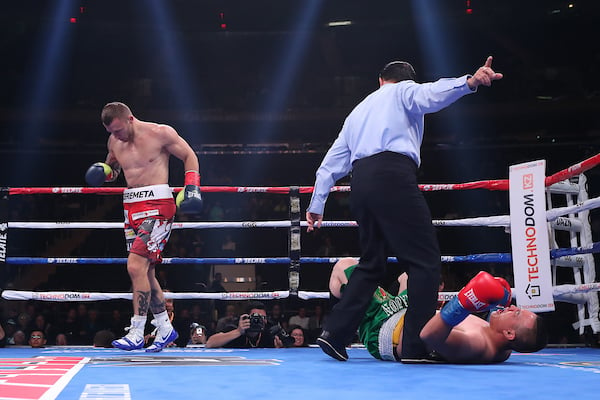 NEW YORK — Unbeaten Polish middleweight contender Kamil Szeremeta takes one step closer to a world title opportunity with a scorching second-round TKO victory over Oscar Cortes on the Gennadiy Golovkin-Sergiy Derevyanchenko middleweight title bout at Madison Square Garden in New York City. The official time of the stoppage was 45 seconds of the second round.

Szeremeta (21-0, 5 knockouts) landed a huge right hand which hurt Cortes (27-5, 14 KOs) the followed up with another two-punch combination sending Cortes down for the second time in the bout. Cortes’ body language very bad prompting ringside physicians to advise referee Benji Estevez to end the bout.

The 29-year-old Szeremeta, fighting in the United States for the first time, dropped Cortes in the first round with a counter left hook. Cortes barely got back to his feet and did just enough to survive the round.

Szeremeta is coming off a unanimous decision victory over Edwin Palacios this past July in his native Poland but it was his win over then unbeaten Andrew Francillette in France earlier this year almost won him the GGG sweepstakes before Team Golovkin settled on Steve Rolls for their first bout under Golovkin’s lucrative deal with DAZN.

In a rather unfortunate professional debut, highly-touted amateur standout and 2016 Irish Olympian Joe Ward (0-1) suffered a self-injury and was unable to continue resulting in a TKO loss to Marco Delgado (6-1, 5 KOs. The official time of the stoppage was 1:00 of the second round. 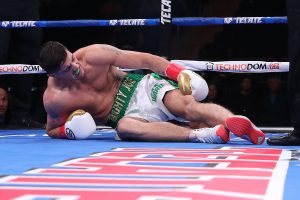 The 25-year-old Ward was attempting to move backwards when his knee completely gave out from under him causing him to go down in a heap of pain. Referee Eddie Claudio ultimately had to call an end to the bout with Ward unable to even get back to his feet.

Ward controlled the first round working behind his jab and his 3-inch height advantage. Twice in the opening stanza Ward had Delgado fighting off the ropes. The southpaw Ward began the second round the way the first ended by controlling the pace and the distance with his jab. In addition to representing Ireland at the 2016 Olympic Games in Rio, Ward also captured the silver medal at the 2017 Amatuer championships in Hamburg, Germany.

In the opening bout of the evening red-hot middleweight prospect Nikita Ababiy (7-0, 6 KOs) made quick work of Isiah Seldon (13-3-1, 4 KOs) scoring a first round knockout. The official time of the stoppage came at 1:45 of the opening round.

The 20-year-old Brooklyn native unleashed a fierce assault of body shots followed by a lethal hook upstairs to down the overmatched Seldon, who is the son of former heavyweight Bruce Seldon. Referee Arthur Mercante did not even start the count and motioned for ringside physicians to race into the ring. Seldon was down for more than five minutes as medics checked on him and he was ultimately helped to his feet. In 17 pro bouts this was only the second time Seldon was stopped.

Ababiy is coming off a unanimous decision victory over Yunier Calzada last July which snapped his 5 consecutive knockout streak which opened his career.