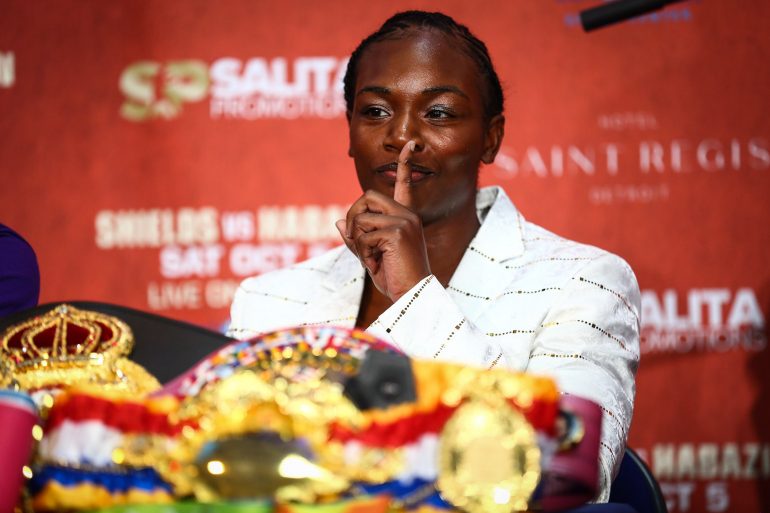 Shields is out to silence the doubters. Photo by Stephanie Trapp/ SHOWTIME
03
Oct
by Joseph Santoliquito

The war face will eventually come on as fight time nears. Otherwise, Claressa Shields has a tendency to laugh during fight week, at her opponents, at the prefight talk that goes on, and the crazy predictions.

It’s because there is no more dominant professional fighter—male or female—in the world today than Shields (9-0, 2 knockouts).

The reigning undisputed middleweight champ will be taking a dip in weight this Saturday when she faces Ivana Habazin (20-3, 7 KOs) for the vacant WBC and WBO women’s junior middleweight titles on Showtime Boxing: Special Edition (9 p.m. ET/6 p.m. PT) from the Dort Federal Event Center in Shields’ hometown of Flint, Michigan.

This will be the first time Shields, the two-time Olympic gold medalist, will be fighting at around 154 pounds since 2016, when she won her first gold medal. She said the nine-week training camp helped her, and she says she feels quicker and faster at 154.

“I feel a lot faster,” Shields emphasized. “I just don’t feel big. I’m one of those women that likes my size. I like the meat on my arms and legs. I’m cool with that. I still have huge legs and my arms still look big. But my pants that I fit in a month ago are super huge now.”

Habazin, 29, a native of Croatia making her U.S. debut, is 5-foot-9 and once held the IBF welterweight title, before being shutout by Cecilia Braekhus in September 2014.

This fight seems to be setting the stage for what could be a colossal showdown between Braekhus and Shields, if Braekhus, who is 38 and hasn’t fought since December 2018, is willing to come up from welterweight to meet the 24-year-old Shields.

For now, “T-Rex,” who is 5-foot-8 and will be giving up an inch in height to Habazin, is focused on what’s currently in front of her.

“That’s it,” Shields said. “I know (Habazin) and her coach are delusional. She has quick hands, but she makes a lot of mistakes, and she only knows how to fight going backwards. When she throws, she swings for the fences and hopes something lands. She’s delusional because she’s talking about knocking me out.

Habazin says she’s ready for Shields. She says she had a tough four-month training camp and that she’s in the best shape of her life.

That may all change once she feels Shields’ power.

“I am 100 percent focused on this fight,” Habazin said. “I trained harder than I ever have before. I had the ability to work on a lot of new things. I had five different sparring partners who brought a lot to help me improve. I gave everything into this camp and I believe I will receive something in return. None of the pre-fight talk bothers me. I’m not going to make a big show and trash talk. For me, this is just part of the job of what I have to do before I fight. All that matters is what is going to happen in the ring. 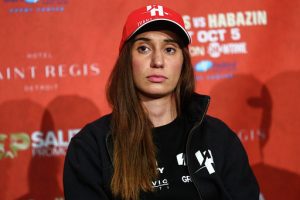 Ivana Habazin says she’s in the best shape of her life for Claressa Shields. (Photo by Stephanie Trapp/SHOWTIME)

“This win on Saturday is going to change my life. This is my biggest fight ever. She’s right now the top women’s boxer, so there couldn’t be a bigger victory. I didn’t come here to lose. I came here to win. I don’t want to waste my energy talking before the fight, but I just want to say I’m excited to see how happy everyone here is right now for Claressa, because they’re going to be sad on Saturday when I win.”

If Shields wins, and there is a high likelihood she will, she’ll become the fastest fighter in boxing history to own world titles in three weight classes, already having captured the undisputed middleweight belt and previously holding the WBC super-middleweight title.

“Saturday night, I don’t see it going past five rounds, and that’s not because Ivana is a weakling or anything, it’s more because how much stronger and faster I am,” Shields said. “I feel sharp and she’s going to have a lot to deal with. She says her game plan is to stand there and fight me.

“She doesn’t realize that I’m a fighter who gets better with every fight. I’m going in there to look better than the last time I fought.”

Shields laughed after that one, too, because she could.