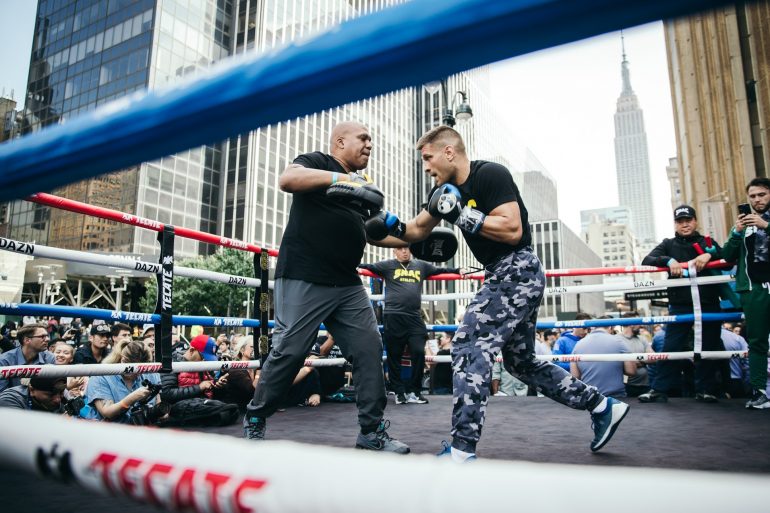 No hedging, no iffing, no talk of “if the best version of my guy shows up, he wins.” Andre Rozier said, point blank, no punches pulled, Sergiy Derevyanchenko will win on Saturday night at Madison Square Garden, on DAZN, against Gennadiy Golovkin.

And no, you’re wrong if you’re thinking Rozier is thinking that GGG is 37, and he’s seen slippage, and thinks his 13-1 (10 knockouts) guy, known as “The Technician,” will take advantage of the aging legend.

Nope, Rozier said he wants A-grade GGG, top tier Triple G in the joint Saturday, and so, when his kid beats him, the 33-year-old gets full credit.

“I don’t want people saying my guy beat a diminished fighter,” the Brooklyn based tutor stated.

“The Techneeshun,” he said, because he wants to say it with some spice, to indicate that his guy is special. And, he said, he will be seen across the board as such come Saturday.

Now, let no one think Rozier is over confident. That would be silly flippancy. “It’s going twelve,” he said. And yes, he knows how this world works. And so does his fighter. The Ukrainian has been told that he will come to the arena two points down. GGG is the A side, and damn right, everyone and their brother and their mother’s brother knows that DAZN seeks a third GGG versus Canelo bout. And so the Kazahk will get the benefit of the doubt in close rounds. Rozier knows it, and says his guy knows it…thus, we will see a Derevyanchenko who knows he must be mightily impressive, so the judges can’t not do the right thing.

I went back at Rozier, asking him, c’mon bro…truly, you think your guy beats GGG Saturday…you don’t think this is a coinflip fight? Nope, he repeated, Derevyanchenko gets the W Saturday.

You might recall Derevyanchenko sat across from Rozier when Andre worked Danny Jacobs’ corner, and Gary Stark Sr took the chief second space for the Ukrainian. Then, in Dervyanchenko’s next bout, against Jack Culcay, when SD won a UD, by a pretty tight margin. Culcay was awkward, in a tough way, Boo Boo Andrade told Rozier, the trainer told me…so we can expect the sharpest version of the Derevyanchenko come Saturday in Manhattan.Rozier and Stark Sr both helming the sled, Derevyanchenko is at the top of his game, this minute.

No punch pulled….no hedging, no caveat that the best version of his guy needs to be in the building Saturday….that guy will be present and showing fight fans that the tippy-top of the middleweight class must make room for a superlative talent in “The Techneeshun.”