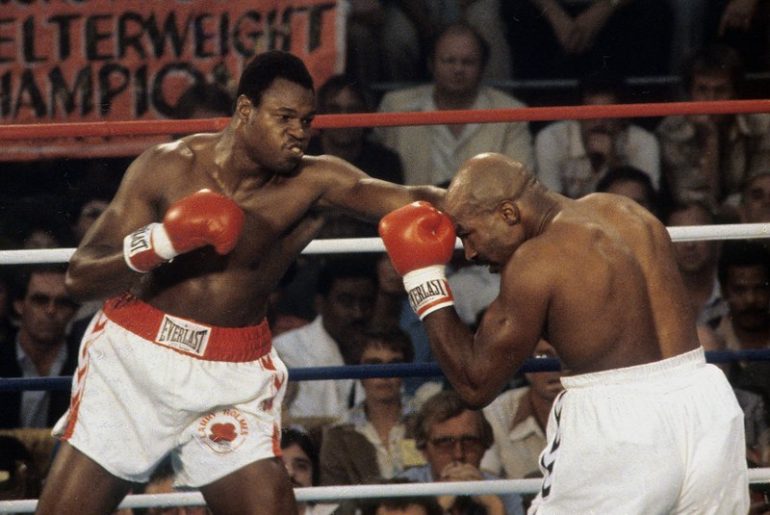 Larry Holmes (left) works Earnie Shavers over with the jab in their 1979 rematch. Photo from The Ring archive
28
Sep
by Tom Gray

The noise when the punch landed was sickening.

It was midway through Round 7 and Larry Holmes went limp, momentarily unconscious, after being struck by a sonic-boom overhand right from the hardest single-shot hitter on earth. Earnie Shavers had landed the lottery punch, a blow so devastating that ringsiders looked on in horror as the champion hit the canvas like a piece of dead meat.

On September 28, 1979, at Caesars Palace in Las Vegas, Holmes, the WBC heavyweight titleholder, had been enjoying a cakewalk through six and a half rounds. Eighteen months earlier, in the very same arena, “The Easton Assassin” has schooled Shavers for the duration of a 12-round non-title bout, but this time the job was even easier. Then the lights went out.

“Early in the fight, he was actually bleeding from the eyes,” Holmes told The Ring. “I said, ‘Earnie, why do you keep taking these punches?’ He said, ‘Shut up, I’m gonna knock you out!’ I said, ‘OK, take this…’ and I went to throw an uppercut, but my left hand was down.

“When Earnie Shavers hit me with that shot, there was a noise [Holmes makes a prolonged buzzing sound]. I found myself on the floor and said, ‘I’ve got to get the hell up!’ That was the hardest punch that ever hit me. I still dream about Earnie Shavers.”

Holmes came back to win by stoppage in Round 11, and how the hell he got up from Shavers’ most lethal of signature moves is anyone’s guess. The former champion once told me that he was out on impact and woke up when he hit the canvas. That might sound like exaggeration for dramatic effect, but when you watch the fight back, the description looks as accurate as a Holmes jab. 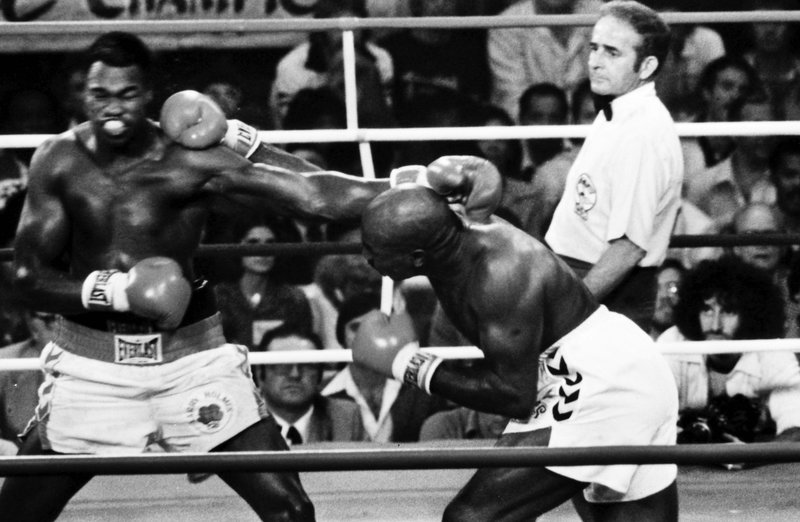 Shavers’ right hand is one of the most lethal punches in boxing history. Photo from The Ring archive

Shavers had already lost a world title bout to Muhammad Ali, who outpointed him in September 1977. A second title shot looked unlikely, but the Alabama native secured his chance by scoring a devastating first-round knockout of former heavyweight titleholder Ken Norton on the undercard of Holmes’ second title defense against Ossie Ocasio in March 1979.

“I told Earnie that he’d knock Norton out,” remembered Holmes. “I’m pretty good at picking fights, and I knew what was going to happen. Norton can’t circle, he comes forward, and you can’t come forward on to a guy who punches as hard as Earnie Shavers. Shavers could knock out a mule, he would knock a cow out, that’s how hard that man hit.

“The other thing is that Norton didn’t have a lot left after I took the title from him (in June 1978). He was very bitter afterwards because he really didn’t want to lose. He wanted to beat me so bad. Even after the fight, he said, ‘I beat you!’ I said, ‘You didn’t beat me, man! I kicked your ass!’ He blamed Don King and everybody else, but I won that fight.”

The one-sided nature of their first encounter meant that Holmes-Shavers 2 was a hard sell. However, the card was stacked with some of the best fighters in the world. Wilfredo Gomez successfully defended his WBC junior featherweight title for the ninth time with a 10th-round stoppage of Carlos Mendoza, the legendary Roberto Duran scored a 10-round unanimous decision over Zeferino Gonzalez and Sugar Ray Leonard knocked out Andy Price in one. 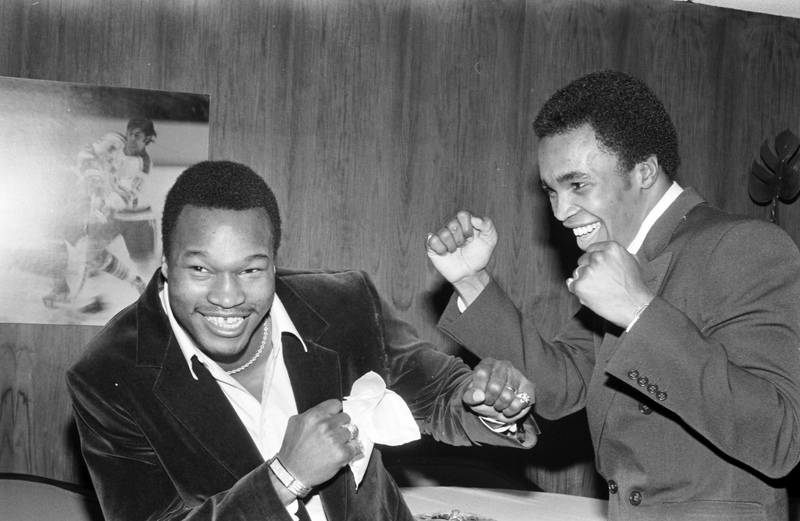 Pure greatness. Holmes and Leonard meet up at a WBC award show in 1980. Photo from The Ring archive.

“I loved Larry Holmes as a fighter,” said Leonard with respect. “In the beginning there was this negative vibe that stopped us from becoming close. It wasn’t until one day, we just said hi to each other and became friends from there. Larry supported my foundation and I supported his foundation. We also did a Ford commercial together.

“Larry never got his just dues for his ability as a fighter. (Muhammad) Ali still overshadowed the heavyweight division, naturally, but Larry was an amazing champion. The heart, the power, the speed and that jab. It’s the most simple of punches, but Larry demonstrated to other fighters why that punch is so important.”

Leonard always recognized the quality in Holmes but for others it took a very long time. The former heavyweight champ habitually recites his story as being a battle for respect and that narrative will probably never change. But Holmes’ boundless desire to prove people wrong is what made him special. Maybe that’s why he survived that Shavers cannonball 40 years ago.

“I proved what I could do, and my record speaks for itself,” Holmes once told me. “I had 75 fights, 69 wins and 44 knockouts. That shows you the ability of a great fighter. I’m not saying I was the greatest because there’s been a lot of great fighters, but I’m one of the guys you have to recognize. I was a force to be reckoned with and you had to be ready or I would take you out of there.”