Sugar Ray Leonard: ‘I get more and more impressed with Errol Spence, Shawn Porter has to make him fight’ 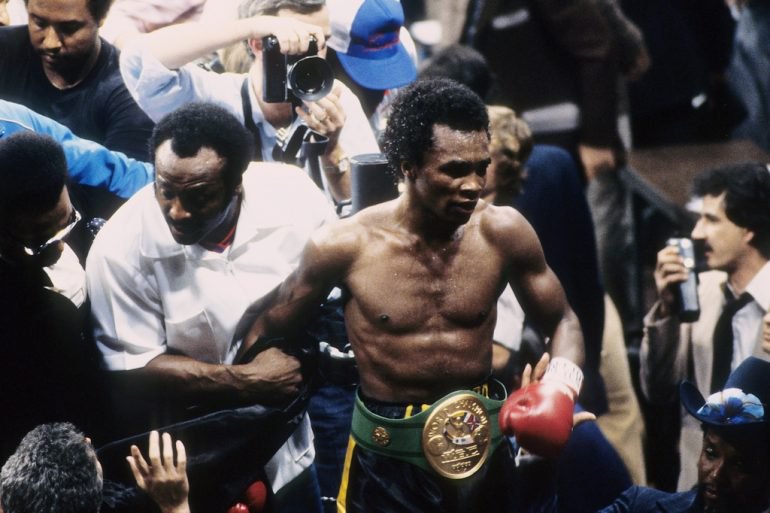 Photo from The Ring archive
25
Sep
by Tom Gray

If the weight is 147 pounds and the stakes are high, there’s one man you need to hear from.

Sugar Ray Leonard won what was arguably the greatest welterweight fight of all time when he scored a 14th-round stoppage over Thomas Hearns on September 16, 1981 at Caesars Palace in Las Vegas. The victory saw Leonard add the WBA title to his WBC version and secure his position as the undisputed welterweight champion of the world.

On Saturday, Errol Spence, the IBF titleholder, faces WBC counterpart Shawn Porter at the Staples Center in Los Angeles. While no one expects the action to rival Leonard-Hearns, this is a fascinating boxer versus brawler matchup that could produce some serious action.

Spence, who is rated No. 1 by The Ring at welterweight, is coming off a near-flawless 12-round unanimous decision shutout victory over former four-weight titleholder Mikey Garcia in March. The quick-fisted Texan is unbeaten in 25 fights with 21 knockouts and holds the No. 6 position in The Ring’s mythical pound for pound rankings.

“I get more and more impressed with Errol Spence every time he fights,” Leonard told The Ring. “In terms of being technical, his hand speed, his power, the way he moves, the way he thinks, the way he breaks an opponent down – it’s almost choreographed.

“Spence is also huge for the weight, like Tommy Hearns was, and to be a southpaw with all that talent – it’s very difficult to overcome that. He can box and he can fight. He’s got it all.” 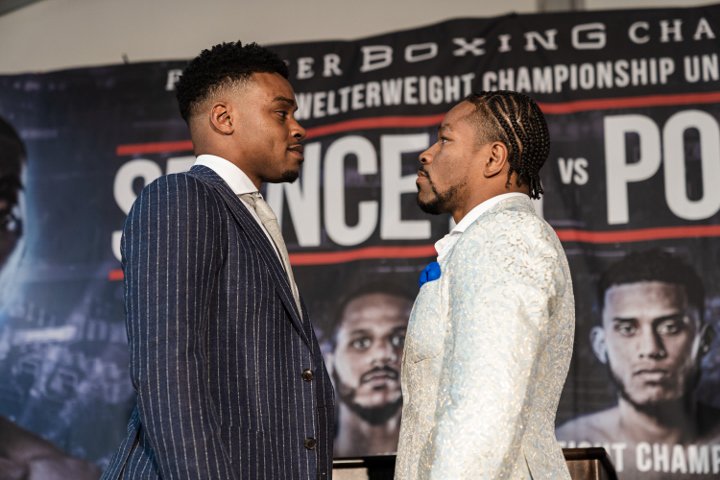 Porter, who is rated No. 5 by The Ring, is a two-time welterweight titleholder. Originally from Ohio and now based in Las Vegas, “Showtime” bounced back from points defeats to Kell Brook and Keith Thurman to claim a vacant title belt at the expense of Danny Garcia. The hard-hitting 31-year-old is coming off a 12-round split decision win over Yordenis Ugas in March.

“I like Shawn’s attitude,” Leonard said. “He doesn’t care who’s in front of him, it could be King Kong and he’ll still feel like he can win. He’s got the right mindset. Joe Frazier had that mindset. Roberto Duran had that mindset. Having that type of desire is very important.

“Against Spence, he’ll have to engage, engage, engage. It has to be that type of fight in order for it be competitive. Styles make fights. Against Tommy Hearns, I found out quickly that I couldn’t stand off. I had to be aggressive, more aggressive that he was, and I had to make things happen.”

Spence, like Leonard in his heyday, has many layers to his game. The 29-year-old lefty can box beautifully and has incredible craft, but he can mix it up when the moment moves him, and he’s a devastating body puncher. Porter (30-2-1, 17 KOs) surely has to cut the distance and work on the inside, but he’s unlikely to get there free of charge. Can Porter take what’s coming back?

“That remains to be seen,” responded Leonard. “In my first fight with Tommy Hearns, Tommy never hurt me in that fight. He may have knocked me off balance, but he never really had me in trouble. In the second fight, he had me in trouble a lot of times, almost knocked out. Things can change from fight to fight and that’s what’s intriguing here.

“You’ve got to give the edge to Errol Spence, but Porter has the attributes to spring a surprise. When I fought Tommy, Duran, (Marvelous Marvin) Hagler – people always tell you what you can’t do. But it doesn’t matter what people think, it’s about what you think. It’s all about what you’re willing to do. Porter has to do what he does best and make Errol fight, he really has no choice.”

The bout will be televised live on Fox Pay-Per-View