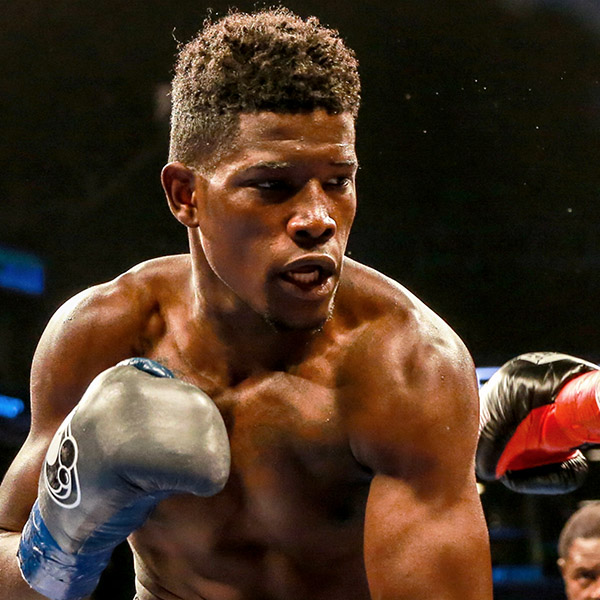 The 12-round bout will take place at the Santander Arena in Reading, Pennsylvania. The PBC card will also feature former IBF lightweight titleholder Robert Easter Jr., who will move up to face Adrian Granados and bantamweights Emmanuel Rodriguez and Rau’shee Warren will square off in a title eliminator.

The clash between Lubin, who is ranked No. 2 by the WBC, and Gausha is a compelling crossroads clash between once-beaten fighters who have fallen short in their only attempt at a world title belt. The winner would become the mandatory challenger to face WBC titleholder Tony Harrison.

Lubin, a southpaw who resides in Orlando, Florida, was victorious in his last bout on June 29 in Houston, stopping Zakaria Attou of France in the fourth round. He has won his last three bouts since losing by knockout in the opening round to then-WBC titleholder Jermell Charlo in October of 2014.

“I’m focused on the task at hand, and that’s beating a world class opponent in Terrell Gausha,” said Lubin, who is ranked No. 9 by The Ring. “My plan is to put all of the belt holders in my division on notice with a victory. I’ve been in camp for five weeks with five weeks to go. I’ll be supremely conditioned and fundamentally sound on Oct. 26.”

Gausha, who is originally from Cleveland and now resides in the Los Angeles suburb of Encino, fought to a split-decision draw against Austin Trout on May 25 in Biloxi, Mississippi.

In his only attempt at a world title belt, the 31-year-old Gausha (21-1-1, 10 KOs) was knocked down once en route to a unanimous decision loss to then-WBA junior middleweight titleholder Erislandy Lara. The fight also took place on the same card as the Lubin loss to Jermell Charlo.

Despite having only one victory in his last three bouts, Gausha believes the level of his recent opposition will be the difference on why he will be victorious on Oct. 26.

“This is going to be an action-packed fight with me and a strong young fighter like Lubin,” said Gausha, who represented the United States at the 2012 Olympics in London. “He’s a good test for me. Lubin will be the fourth southpaw in a row that I’ve faced and I’m ready to go again. I’m just at a point where I want to fight the best and most challenging fights possible. He called me out and I’m definitely going to be ready for him on Oct. 26.”

In the co-feature, Easter will attempt to snap a two-bout winless streak in his first bout at 140 pounds against Granados.

Easter, who resides in Toledo, Ohio, fought to a split-decision draw against Rances Barthelemy in his last bout on Apr. 27. In his previous fight on July 28 of last year, Easter (21-1-1, 14 KOs) lost by unanimous decision to Mikey Garcia in a unification bout, losing the IBF lightweight title in the process.

“I’m moving up to 140 pounds and I’ve been preparing really hard for this fight,” said Easter. “Expect me to come out and be very explosive on Oct. 26. I anticipate Granados coming to fight like he always does. He’s a fighter who always comes prepared and puts his heart into it, but I’m going to do the same thing and show that I’m ready to make a statement in this division.”

Granados, a resident of the Chicago suburb of Cicero, last fought on Apr. 20, losing by knockout in round seven. Granados (20-7-2, 14 KOs) has lost five times by either split or majority decision.

“I’m expecting a tough fight against Robert Easter Jr. on Oct. 26,” said Granados, who is best known for beating then-unbeaten Amir Imam in November of 2015. “Our styles mesh well. Easter is a sharp fighter and that’s why I’m giving it everything I have in training camp. I’m looking to bounce back from my last fight and show everyone that I still have a lot to give the sport of boxing. Easter is a technician in the ring but I’m a warrior and I’m going to come with everything that I have.

Warren, who resides in Cincinnati, is one spot below Rodriguez, who is ranked number five, in the WBC rankings. A resident of Vega Baja, Mexico, Rodriguez (19-1, 12 KOs) lost the IBF title after he was knocked out by Naoya Inoue in his last bout on May 18.

The winner will become the mandatory challenger to face WBC titleholder Nordine Oubaali, who defeated Warren (16-3, 4 KOs) by decision on Jan. 19 to win the vacant WBC title.

Francisco A. Salazar has written for The Ring since October of 2013 and has covered boxing in Southern California and abroad since 2000. Francisco be reached by email at [email protected] or on Twitter at @FSalazarBoxing.