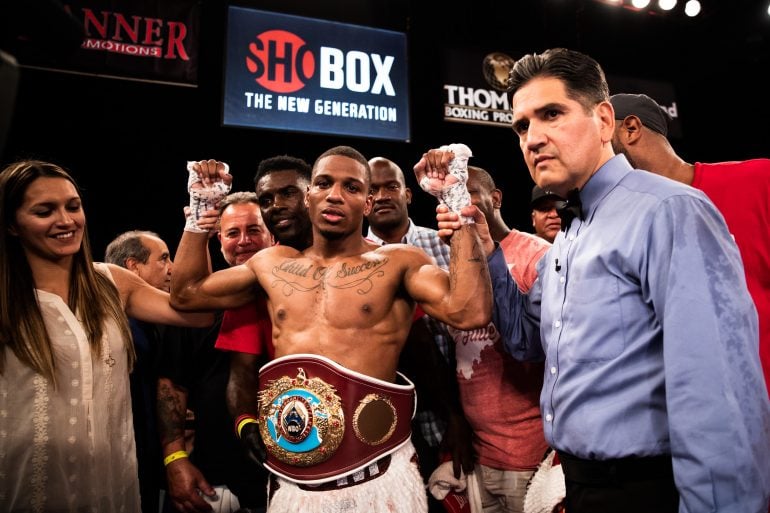 Thomas Mattice has had a habit of doing this throughout his career. The Cleveland, Ohio lightweight gets called into test the A-side fighter, and sometimes he pulls off a shocker (as he did in a highly controversial eight-round split-decision victory in July 2018 in Iowa over Zhora Hamazaryan).

There was no controversy Friday night.

Mattice (15-1-1, 11 knockouts) pulled off yet another shocker by ruining the homecoming of Michael Dutchover (13-1, 10 knockouts) with an eighth-round TKO on cuts in what was a scheduled 10-rounder on Showtime’s ShoBox: The New Generation from the La Hacienda Event Center, in Midland, Texas.

Referee Robert Velez stopped the fight with 1:33 left in the eighth, when Dutchover suffered a gaping cut over his left eye. The ringside physician made the call that Dutchover couldn’t continue, and since Velez ruled the cut was caused by a punch, Mattice was awarded the biggest victory of his career—and a possible future date again versus Dutchover in a rematch.

“I wanted a stoppage but not that kind of stoppage. Round by round was a tough fight,” Mattice said. “I kind of thing that when I pushed him back, he got in trouble, because he can’t really fight going backwards. Honestly. He couldn’t box with me, but I got my mind stuck on knocking him out to make it more competitive.

“My corner told me, ‘It’s the eighth round and we probably need a knockout.’ And that’s when I pressed him. He only hurt me twice with his overhand right, but it was just a pop. I’m a big guy. I can take his pops. I’m a little older, I’ve been with bigger guys. That gave me the edge.”

In the beginning, it looked like Dutchover would enjoy a successful homecoming in making his first national TV main event debut. He worked well to the body, though most of his shots were caught by Mattice’s arms and gloves. Dutchover was easily the busier fighter.

With 2:37 left in the second, Dutchover caught Mattice with an overhand right. Later in the round, Dutchover closed in and chopped at the body. After two, it appeared Dutchover was in command.

Mattice started coming back in the third, especially in the last minute of the round. Mattice landed a left on Dutchover, followed by a body shot. It may have been the first round Mattice won.

In the fourth, Mattice came out aggressive again. He went from being chased to the stalker.

Dutchover rebounded later in the fifth, once again going to the body and possibly doing enough to win the round.

Dutchover entered new territory when the fight entered the seventh. Dutchover had never been seven rounds before. It wound being a good round for him. Mattice attempted to steal the round in the late portion of the stanza, but he had taken too much punishment from Dutchover earlier in the round.

In the eighth, Mattice opened a cut over Dutchover’s left eye. Referee Robert Velez stopped the fight with 1:33 left in the eighth, ruling the gaping cut was caused by a punch and not a clash of heads.

“I’m disappointed. It was a great fight for the fans,” Dutchover said. “The fight unfortunately got cut in the eighth round. I was up in the scorecards and I was going to finish the fight but it was out of my control, the referee stopped it and there’s nothing that I could do about it and that’s that. I got cut with a big punch and it opened up and the ref said I couldn’t continue. I wanted to continue but they didn’t let me.

“I was feeling good, I thought I was going to win. I was sticking to my game plan but the cut changed the course of the fight. I’ll be back.

“The crowd here in Midland came out to support me. It was amazing. I didn’t get the win but these types of things happen in the sport of boxing.”

Ruben Villa was touched up a few times, and that’s all Enrique Vivas could manage in a 10-round featherweight co-feature under the Dutchover-Mattice main event. 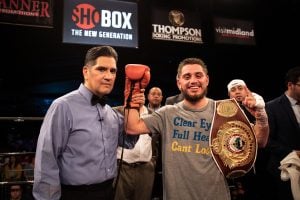 One of Villa’s power shots was a flush left behind a jab that caught Vivas on the chin, sending him down.

The sixth-round delay didn’t derail Villa. Vivas did land a right near the of the round, though Villa’s precise punching frustrated Vivas.

In the opening TV bout, Brandun Lee (17-0, 15 KOs) made easy work of Nicaraguan Milton Arauz (10-2-1, 5 KOs), stopping him at 2:59 of the second round in a scheduled eight-round welterweight bout. Lee was devastating behind a jab and blunt right that crumbled Arauz to the canvas. 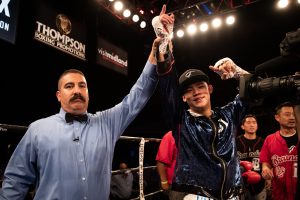 Entering the fight, Lee’s previous 16 opponents had a combined record of 52-225-18. Lee fought for the fifth time this year. By Arauz going two rounds, it snapped Lee’s streak of six-straight, first-round stoppages.

Lee was surprised that Arauz didn’t go down in the first round.

“I think I’m back in November. I’m not sure when or where but I want to fight again this year.”