Buddy McGirt: Canelo-Kovalev is going to be a very interesting, calculating fight 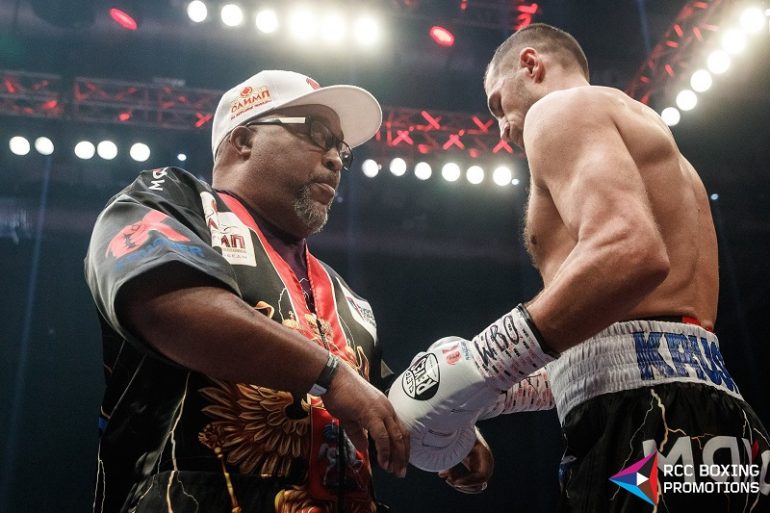 Canelo Alvarez will rise from the 160-pound division to challenge Sergey Kovalev for the Russian veteran’s WBO 175-pound title on November 2 in Las Vegas. The DAZN-streamed showdown, which will be hosted by the MGM Grand Garden Arena, will mark the first time the reigning middleweight champ will challenge a reigning light heavyweight champion since Sugar Ray Robinson attempted the feat against Joey Maxim in 1952.

Kovalev survived a bold challenge from Yarde and triumphed. Photo by Valery Sharifulin-TASS via Getty-Images

Alvarez (52-1-2, 35 KOs) is coming off a unanimous decision over middleweight beltholder Daniel Jacobs in May. In February, Kovalev (34-3-1, 29 KOs) avenged a KO loss to Eleider Alvarez by soundly outboxing the unbeaten Colombian standout to a unanimous decision victory in his first bout under the guidance of respected training and recent hall-of-fame inductee Buddy McGirt. Last month, August 24, Kovalev defended the WBO belt he regained from Alvarez with an 11th-round stoppage of unbeaten mandatory challenger Anthony Yarde.

Alvarez, the early odds and media favorite, will make history if he defeats Kovalev. Should the three-time light heavyweight champ upset the odds, he’ll regain the pound-for-pound status he once had before losing back-to-back bouts to Andre Ward (in controversial fashion) and make a strong case for being 2019 Fighter of the Year.

Ring Magazine Editor-In-Chief Doug Fischer visited McGirt’s gym in Northridge, California the day before the kick-off press conference in Los Angeles to get the former two-division champ’s thoughts on the matchup.

Fischer: What were your thoughts when this talked-about fight was finally announced last Friday?

McGirt: I was excited when the matchup was finalized because boxing needs fights like these. You’ve got Porter-Spence, that’s gonna be a hell of a fight, then right after that you got Canelo vs. Sergey. I’m excited and I really respect Canelo for making that jump and not asking for a catchweight. He’s doing what real world champions so and you gotta respect that.

(McGirt said he’s not aware of any rehydration clause that would limit how much weight Kovalev is allowed to put on following the weigh-in. “I don’t think so, I’m going to say no to that because if that was the case, you’d make it catchweight.”) 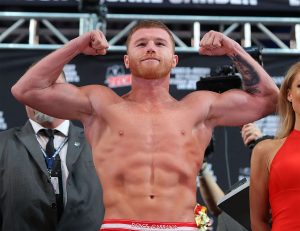 Canelo weighed in at 167.25 pounds (the heaviest of his career) for his super middleweight bout vs. Rocky Fielding. Photo by Tom Hogan

McGirt: I’ll say this, I don’t think Canelo is going to come in heavier than 168 pounds. That’s what I believe, for the simple fact that he’s gonna eat the night before and the day of the fight, so he’s gonna put on pounds, but to come in heavier than 175 or 180 pounds is not going to work in his favor. You stay where you’re good at, where you’re comfortable at. Ten pounds above his natural weight is enough and really isn’t going to make a difference if you can fight.

Fischer: I hear from fans on Twitter that this fight is between a calculated risk and “easy work” for Canelo. They say Kovalev is old, shot, or that he can’t take it to the body. What’s your response to that line of thinking, especially following two camps with Kovalev.

Seriously, Sergey is excited about this fight. He knows it can cement his legacy. He’s really taken this to heart. He’s called me 100 times already. He wants to start sparring tomorrow. I’m like “Relax, you just fought, relax.” He called me again last night and said, “Are you sure?” I’m like “Take it easy, man, hold on, let me skin this cat.”

We got the rest of this month and October. He just fought so it’s not going to take long to get in shape.

Fischer: So, what do you say to folks who think it’s too quick of a turnaround to fight Canelo on November 2 after fighting in late August?

Fischer: Break the fight down, stylistically. What’s Kovalev’s keys to outpointing Canelo or breaking him down?

Fischer: What are Kovalev’s strengths in this matchup? 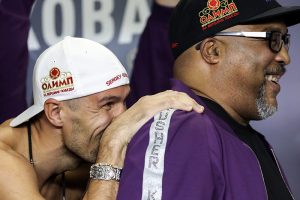 McGirt: His strength is his left jab, baby. And he’s smarter than what people think. His boxing IQ is higher than what people think. A lot of people think he doesn’t have a boxing IQ. They think he’s just a puncher, but he’s smarter than what people give him credit for. I didn’t realize he was that smart until I started training him because he was knocking everyone out, so he got away from it. One day he sent me a video of him from the amateurs. I watched it and asked him “What happened to this guy?” He said, “I don’t know, I got away from him, Buddy.” I said, “How bout we add a little bit of this guy to the guy now and let’s see what happens.”

Fischer: And what about Canelo’s strengths?

McGirt: Canelo is one hell of a fighter, very smart, very technical. You gotta be on point when you fight him. You can’t go straight at him because he’ll eat your lunch. If you try to box him, you gotta be busy. If you’re not busy, he’s going to walk right through you. What you gotta do is not let him get his rhythm going. Once he gets his rhythm going then he’s got ya.

Fischer: Any flaws in Alvarez’s game?

McGirt: Not really, but yes. Sometimes Canelo can get a little lax. That’s because he’s always in control. So, we gotta take him to a position where he’s never been, and that’s a position where he’s not in control, ya know what I mean? Once he’s in control, he relies on his ability and he’s very good, he can really fight, so we gotta take him to where he’s never been, mentally, not just physically. That’s why I say it’s going to be about mind games. It’s going to be interesting.

Fischer: The fight takes place in Las Vegas and there’s a line of thinking that Canelo can’t lose a decision in competitive fights there. Does that weigh on your mind or impact how you prepare Kovalev?

McGirt: Not at all. Let me tell you why. The whole world is gonna be watching. So, if you get jerked, it’s gotta be a rematch.

Fischer: I guess there are worse fates in boxing.

McGirt: OK? So, if you’re gonna get jerked… say you clearly win, and everybody sees that, but you don’t get the decision… you do it again. Hey, it didn’t hurt Golovkin’s career.

Fischer: No, he’s doing quite well.

Fischer: You mentioned that Kovalev is ready to start sparring. Do you need to bring in smaller guys for him to prepare for Canelo’s stature and quickness? 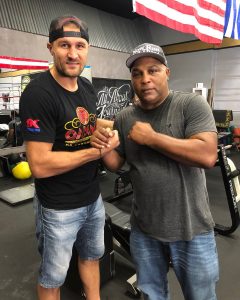 Buddy McGirt with Sergey Kovalev at his gym in Northridge, California.

McGirt: I’m an old-school guy, man, to me, work is work whether guys are big, small, whatever. Work is work. Been doin’ this too long to look for a certain guy or think we need a certain sparring partner because of who we’re preparing for. We just need guys to give him work, make him work, make him think, you know? That’s what you need. I’m not someone who says “OK, my fighter’s fighting a 5-foot-4 guy so I gotta get sparring partners that are no taller than 5-foot-5.” That’s all bulls__t. Guys who do that are guys who are trying to make their job more important than what it is. In the old days, whoever was in the gym you worked with. (Chuckles.)

Fischer: Does Kovalev’s experience compare with Canelo’s in your view?

McGirt: Listen, they’re both smart and they both have faced the best fighters in their divisions. That’s what makes this fight interesting. I think it’s going to be a very interesting, calculating fight. They’ve fought everyone put in front of them. You can’t fault either one of them. My hat’s off to Canelo for stepping up to light heavyweight and saying “You know what? No catchweight. Just be ready.”