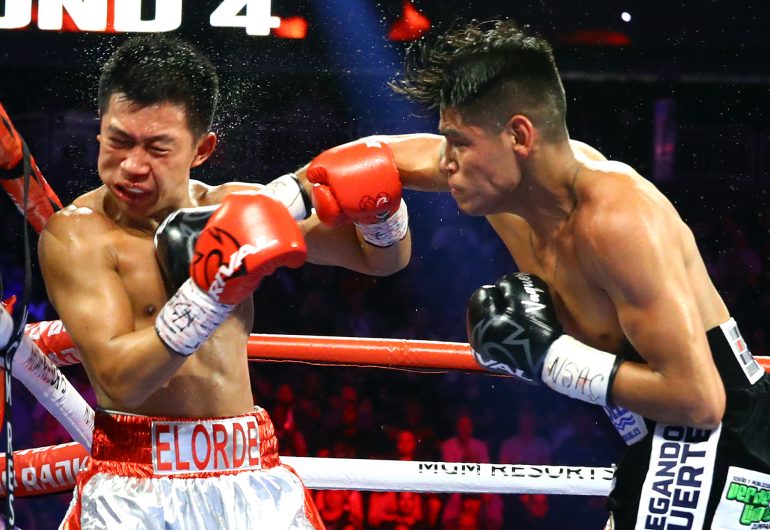 The Filipino challenger, the grandson of the great Flash Elorde, was looking to counterpunch, but the champion took over in round two. He was having fun with his left, helping himself to jabs, hooks and uppercuts to Elorde’s body and head.

The Filipino began to look forlorn and weary by the end of the session. Navarrete, now 29-1 (24 knockouts), was just too big and too strong to keep off.

“I’m happy because I think I put on a great performance,” said Navarrete. “Fortunately, my opponent is okay, and I came out here to put on a show. I hope the fans enjoyed it on my very first Las Vegas show on Mexican Independence Day Weekend. ‘Vaquero’ Navarrete is here to stay. The most important thing here was that it was a good performance for me.

“I think the referee did the right thing. He’s going to go home to his family, and everything is going to be okay. It was a good performance on my behalf and he gave what he could. At the end of the day, I came away with the hard-fought victory.” 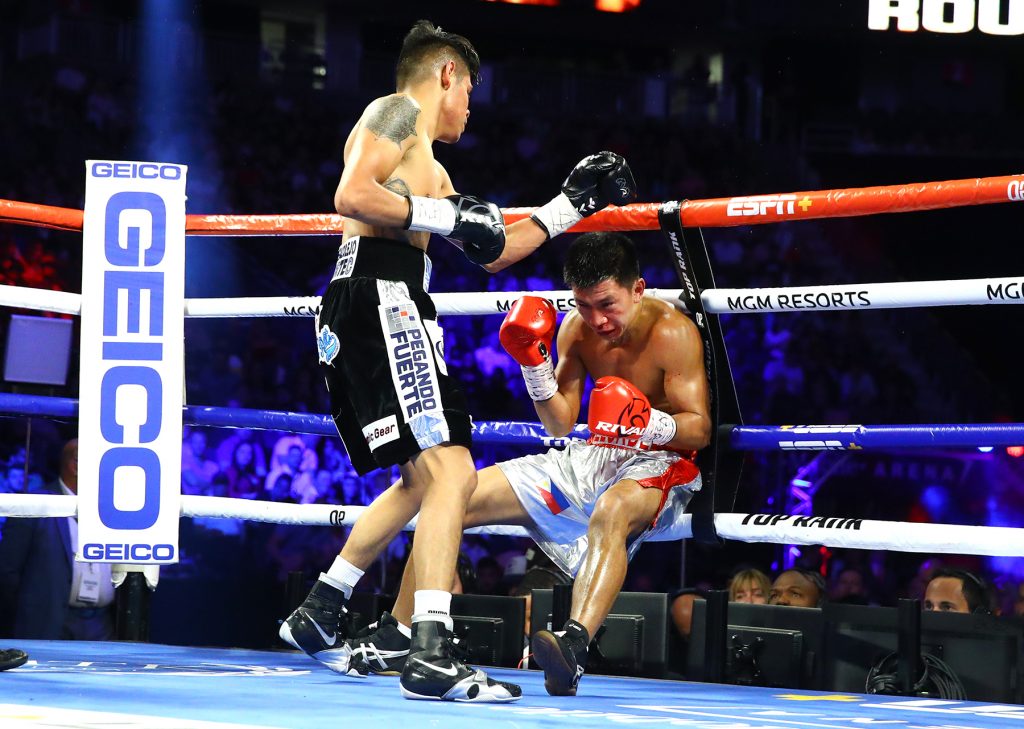 Elorde was taking a beating through the third and shipped a big left hook and a heavy right near the bell. Blood leaked from his nose and referee Russell Mora ruled the ropes kept him up before issuing a count.

You could have argued the fight should have been stopped between rounds but Elorde, so brave, too brave, went back out for the fourth and Navarrete continued where he left off. It was uncomfortable to watch as the champion sought the finish until Mora thankfully intervened. Elorde (28-2, 15 KOs), looked heartbroken but he should be grateful that he was allowed to last just 26 seconds of the round.

“It’s probably one of the best days of my life,” said Zepeda. “It’s Mexican Independence Day. I was giving everything for Mexico.I guess persistence [was the key to victory]. The people here were giving me excitement to go get him, to go after this guy. We knew that he was a hell of a boxer. Thank God I’m the third one that beat him. The other two were elite fighters. I’m happy for that.
“There were talks that maybe the winner of this fight would go after [Jose] Ramirez. For me, the rematch, I would have that. It was a very close fight.  A lot of people thought I won, a lot of people thought he won. I would love a rematch. I think the people would love it, too.”

It was a close, feeling out-type opener. Southpaw Zepeda, from La Puente, California, was looking to change angles and attack while Pedraza, from Cidra, Puerto Rico, was trying to invest to the body.

The action started to pick up towards the end of round two, with Pedraza exchanging from the southpaw stance. In fact, he opened the third left handed as he looked for openings but when he changed back to orthodox he ate a straight left.

Zepeda got his left hand motoring and landed a right into Pedraza’s side during a successful third round.

Pedraza was readily switching stances, Zepeda was looking stronger in close. They battled on even terms.

Zepeda broke through in the seventh, scoring with a flurry of shots that promoted Pedraza to fire back and land a good left of his own, but Zepeda was looking bigger, stronger and more assertive.

Pedraza, swollen by the left eye, was alert defensively, not allowing Zepeda to over-run him and moving smartly as the ninth ended and Zepeda tried to pin him down. They banged heads and blood was spilt in the 10th but Zepeda remained on top, even if he didn’t manage to break Pedraza’s spirit.

“It was a very good fight,” said Pedraza. “He looked very well, and I just couldn’t do any of the things I wanted to do. Nothing came out the way I wanted. The instruction from my corner was to throw more punches, but nothing was going my way.This was my debut at 140. I felt good. I will meet with my team to evaluate if we stay at 140, or if we move down in weight.”