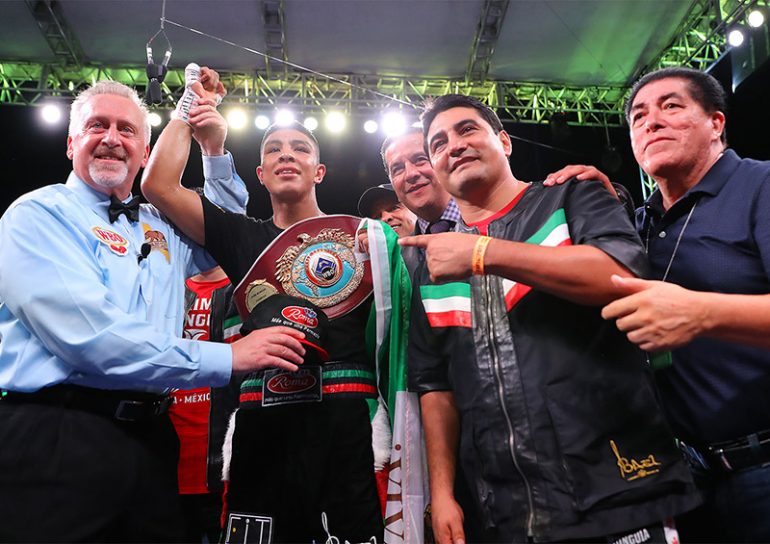 CARSON, California – Switching trainers from Robert Alcazar to Erik Morales didn’t automatically transform Jaime Munguia into a 154-pound “El Terrible,” and that won’t likely ever happen (even when the Tijuana native moves to a heavier, more comfortable weight class), but against Patrick Allotey on Saturday he fought in a style that was natural to him – that of an aggressive power puncher – and he got the job done.

That’s an improvement over the Alcazar-trained version of Munguia that tried to mix boxing on his toes with pressure fighting and wound up getting tagged hard all night against Takeshi Inoue in January and then taken to school by Denis Hogan, who many thought deserved to win the decision when they clashed in April. Munguia remained unbeaten with a majority decision but his reputation took a big hit and his promoter Fernando Beltran, who used to promote Morales, brought in the hall of famer to help right the ship.

It’s not going to happen overnight but Saturday’s showing was a step in the ring direction as Munguia scored three knockdowns en route to a fourth-round stoppage. 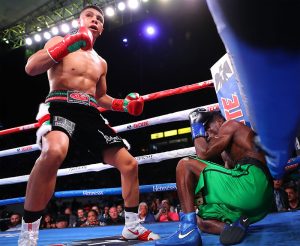 Against Allotey (40-4, 30 KOs), a 28-year-old veteran from Ghana, Munguia swung and missed a lot in the first six minutes of the DAZN-streamed main event from Dignity Health Sports Park, but the defending WBO 154-pound titleholder switched his attack to the body in Round 3 and his decided advantages in size, strength and power became immediately evident. A body shot followed by a late punch to the top of Allotey’s head put the Ghanaian down in his own corner, and following a brief pause in the action to allow Allotey to recover from a low blow, a double hook to the head sent him down against just before the bell.

In Round 4, Allotey, who had tried to emulate Hogan’s stick-and-move strategy, was in survival mode and a warmed-up Munguia increased his pressure and let his hands go with better technique. A hook to the body and head combination produced a delayed knockdown that essentially ended the fight. Allotey gamely got up and told referee Jack Reiss that he wanted to continue but his corner wisely intervened and instructed the veteran official to end the bout at 2:18 of the round.

Munguia (34-0, 27 KOs), one of the busiest world titleholders in the sport, reminded the fans in attendance and those watching DAZN and on TV in Mexico that at age 22 he’s still a work in progress but he’s willing to put in the time and effort to get better.

“The training camp was really heard,” he said during his post-fight interview. “I learned from Erik, but it’s a combination of everything I’ve learned from everybody who has trained me, including my father.

“(Allotey) tried to do the same thing as Hogan but I’m learning fight by fight.”

Munguia is a huge junior middleweight who struggles to make 154 pounds. Middleweight has always been one of boxing’s glamor divisions and that remains so with superstars Canelo Alvarez and Gennady Golovkin fighting at 160 pounds (and on DAZN). So, one never knows when Munguia will fight his last bout at 154 pounds and make the anticipated move to middleweight.

“I need to talk with my team first, and then we’ll decide,” he told DAZN’s Chris Manix. “First I have to move to 160, but I’m ready for them (Alvarez and Golovkin).”