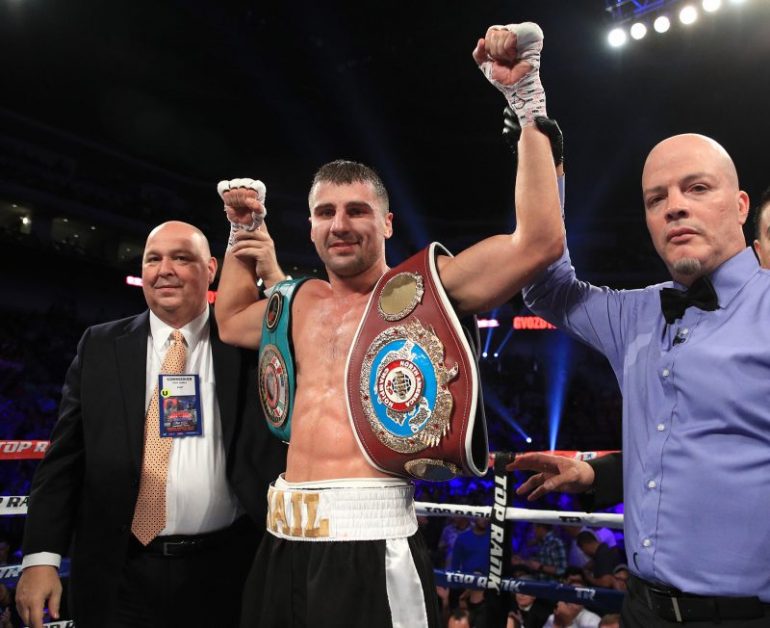 WBC light heavyweight titleholder Oleksandr Gvozdyk is already deep in camp in Philadelphia preparing for what boxing fans hope will be 2019’s Fight of the Year.

Gvozdyk, who is rated No. 1 by The Ring at 175 pounds, meets IBF counterpart Artur Beterbiev in a mouthwatering unification fight on October 18 in the City of Brotherly Love and he is ready for fireworks having lost to his opponent in the amateurs around 10 years ago.

This time, however, he meets the man on equal footing. They are regarded as two of the best in the world today in a packed light heavyweight division.

“He was definitely more experienced,” Gvozdyk recalled of their unpaid meeting. “He was like a star amateur and for me it was my first serious tournament with the Olympic team. I’d just won national championships and then I was fighting a guy I’d been watching on TV. He was too tough for me at that time.”

“Maybe a little bit, because he was tough and he was a star. Maybe. Now it’s my time.”

And now Gvozdyk is getting the eye of the tiger, training in Philly and working under trainer Teddy Atlas.

“It’s a nice place, it’s got good history and we’re training in a rough area, which is also kind of cool,” he said.

Philly is known for sparring wars, and Gvozdyk is hard at work.

“I always go hard in sparring, I never have light spars. It’s always like a real fight,” he said.

He also works diligently to please Atlas, a man who suffers no fools and who likes things done the right way.

“I think he makes me smarter, he improved my skills,” said Gvozdyk. “Teddy has a completely different approach. He’s very smart, he’s very experienced and he’s very particular; he can see really small things which other trainers haven’t seen that came help you a lot.”

And the very mention of the famous Atlas temper draws a smile from Gvozdyk.

“Yes,” he laughed, when asked if he’d ever been on the receiving end. “But only when I’m doing something wrong. When I see him like that, I try to correct my mistakes.”

Gvozdyk is ambitious. His path to unification continues with Beterbiev but it actually began when he took the title from Adonis Stevenson in a fight that left Stevenson with catastrophic brain injuries. It is something he has been able to put behind him, given Stevenson’s recovery.

“It was [on his mind a lot] but he recovered really soon and I keep watching what his team members post in social media and then I saw an interview with his wife where he said he was 95 percent recovered, so I don’t have a burden anymore because he got better and I’m happy for him,” he said.

Gvozdyk is expected to go back into the trenches with Beterbiev. Expectations are high for fireworks.

“I hope so,” he said when asked whether he expects a crowd-pleasing war. “To be honest I don’t care. My goal is to beat this guy and how I do it doesn’t matter to me. I think it’s going to be exciting.”