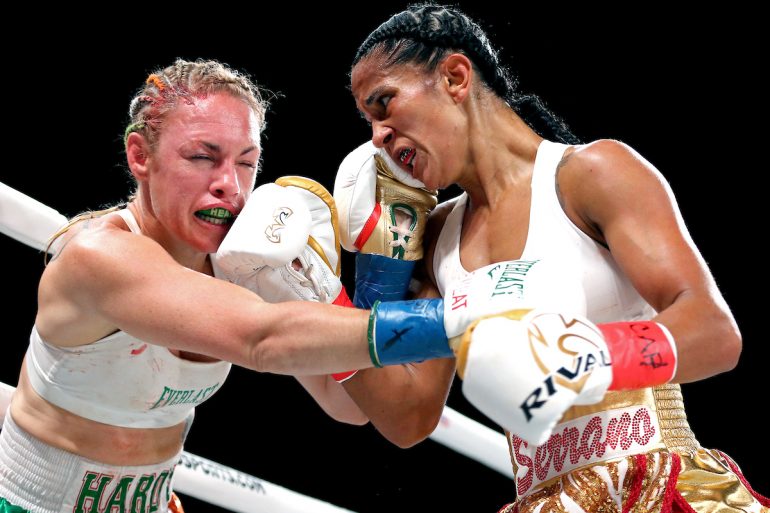 NEW YORK — An over-arching storyline coming into this Friday night fight was the battle outside the ring, for purse parity,  for a version of equality, for fairness. For more money, so they’d not have to slide from pugilism to MMA, to better make ends meet.

Then, in Manhattan, and on the DAZN platform, that storyline receded and the more pressing matter at hand came to the fore; it was fight time, not for better treatment as laborers, but physically, for seamless upward mobility in professional relevance.

Heather Hardy and Amanda Serrano are among the best known and bottom line best practitioners of the craft on the female side, and they scrapped at Madison Square Garden’s Hulu Theater, with considerable stakes.

The winner would be fighting tip-topmost echelon hitter Katie Taylor, perhaps in February, and for a paycheck that promised to better than adequate or solid…it would be fruition money, a lil’ lotto ticket that could be looked at and would conjure true gratitude, at the savage and less often sweet science. So, with those elements summoned and then shoved aside, the better to fixate on the task at hand, the bout unfolded.

“It was a great performance. Heather is the toughest they come and she’s a champion for a reason. She came to fight, but I was the better girl tonight. She’s just not on my level yet,” said Serrano.

“Katie Taylor wants 140, so we will see what she wants to do. No matter what weight, I’ll win.”

In round one, we saw the 37 year old Hardy, a Gerritsen Beach, Brooklyner who took up fighting when she realized it would be something that maybe could get her the bread to meet tuition deadlines for her daughter. Then Serrano flurried almost the whole round. Would this be a blowout?

In the second, the intense Serrano, age 30, from the Bushwick neighborhood of Brooklyn, who has talked about jumping ship to MMA or WWE, as she hops up and down weight classes, one of the most prolific belt collectors in the realm, male or female, got back to work. The lefty stalked, and Hardy moved smartly. She moved her head, got her bearings, and got back into the swing.

In round three, the righty Hardy looked energized, and in a rhyhm. Her mobility ability was showing.

To round four…we saw Hardy in center ring, looking to establish some O. Serrano wanted to counter, after jabs, and guess what, Hardy likely took that round. She looked energized and that she knew what was in front of her, and like she could defuse it.

In the fifth, we saw Hardy edging forward, being the aggressor. Serrano’s tosses were harder, but Hardy’s smart boxing was winning her portions of points, for ring generalship.

In the sixth, we saw Hardy in center ring, and Serrano had to contend with pot-shotting from Hardy. Another Hardy round?

Round seven saw Hardy nod, as she did every round, you could hear that brain whirring, her calibrating strategy and tactics. Her defense was sharp, she was slipping so well.

In the eighth, we saw Hardy get in, get off, get out, be the better ring general.

In round nine, Hardy made her miss and got tagged some with power, but man, how would the judges be seeing this? Would they reward the less powerful but slick boxer?

In the tenth, Serrano chugged forward, but Hardy made her miss, slid left, popped the jab, then Hardy had to fend off hard pressure. Action round, and a fan-friendly scrap, we’d go to the cards.

“How fucking tough is Heather Hardy,” said Lou DiBella, who promotes both fighters. “No losers in that one.”