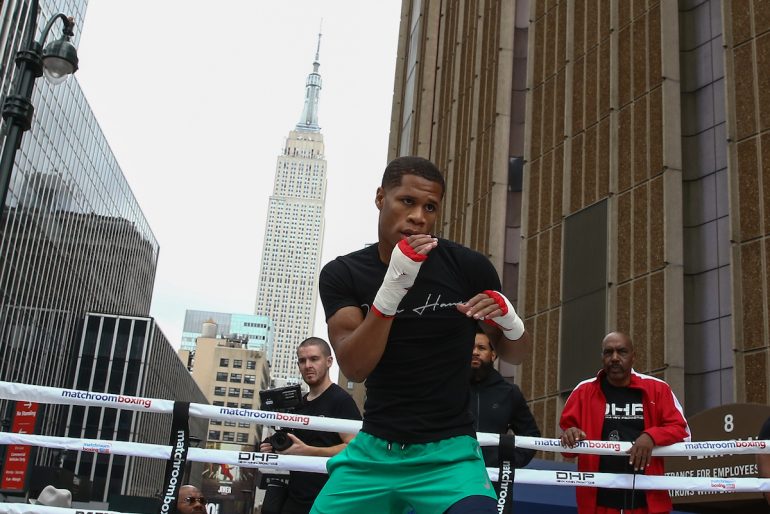 It is true, more so even in this age than in prior eras, that nice guys can finish last. Or, if not that, get lost in the shuffle a bit.

The the trash talkers, the Broner sorts, they will get more ink, more coverage, more hits than the nice guy types…and no, that isn’t right.

With that in mind, I wanted to give an extra nod to Devin Haney, who is by no means that Broner type of dude.

That all came to mind as I was watching the video appetizer sent out by Team Haney ahead of his Friday night main event showing at The Theater at Madison Square Garden in New York City, which will screen live on DAZN, beginning at 9 p.m. ET.

The kid – yes, he is a kid, he cannot buy beer without fibbing – comes off as confident. but not in that dickish way which helps entertainers get noticed, oftentimes.

He starts off by telling us that his work ethic separates him from the rest of the pack, and no, he is not a prospect. We see Haney smashing up a bag, and footage from his last win, against Antonio Moran, in May.

“The most underrated part of my game has to be, by far, punching power,” the 22-0 (15 knockouts) hitter, from Calif., who now lives in Las Vegas, tells us.

“A world title right now, means everything to me, that’s the only thing that I’m missing. I’ve been calling out these top guys for awhile now, and they’ve been turning me down, I can’t help that they don’t wanna fight me!” They all can run, but not hide, he says…and very soon, he will be able to meet those A listers, and show that he is a superstar, he declares. “Why I am who I am, and what separates me from everyone else,” he says, in closing.

Abdullaev, what about him? He is 25, and a BoxRec check tells us he has met a “name” fighter, Hank Lundy, in September of 2018. He got a decision win over the vet.

So I checked in with Lundy; what does he think about this fight, Haney vs Abdullaev? “I beat Abdullaev but was not going to get the decision in Russia,” Lundy told me. “Haney has not fought anyone!”

Abdullaev indeed will be mildly shocked at the hand speed of Haney. Whereas he could hang tight, close up to a foe, now being so close to Haney will rattle him. Jabs that he slipped on the way up will tickle his nose. He will get punished for throwing wide, as Haney digs down the middle to find free zones to attack. Haney’s movement, too, will prove mystifying to Abdullaev. He sometimes puts his head on a platter, and I expect Haney to take advantage of that and snag his 16th stoppage. And to be classy and confident, again, while taking a bow.

ShoBox: Where no show had gone before